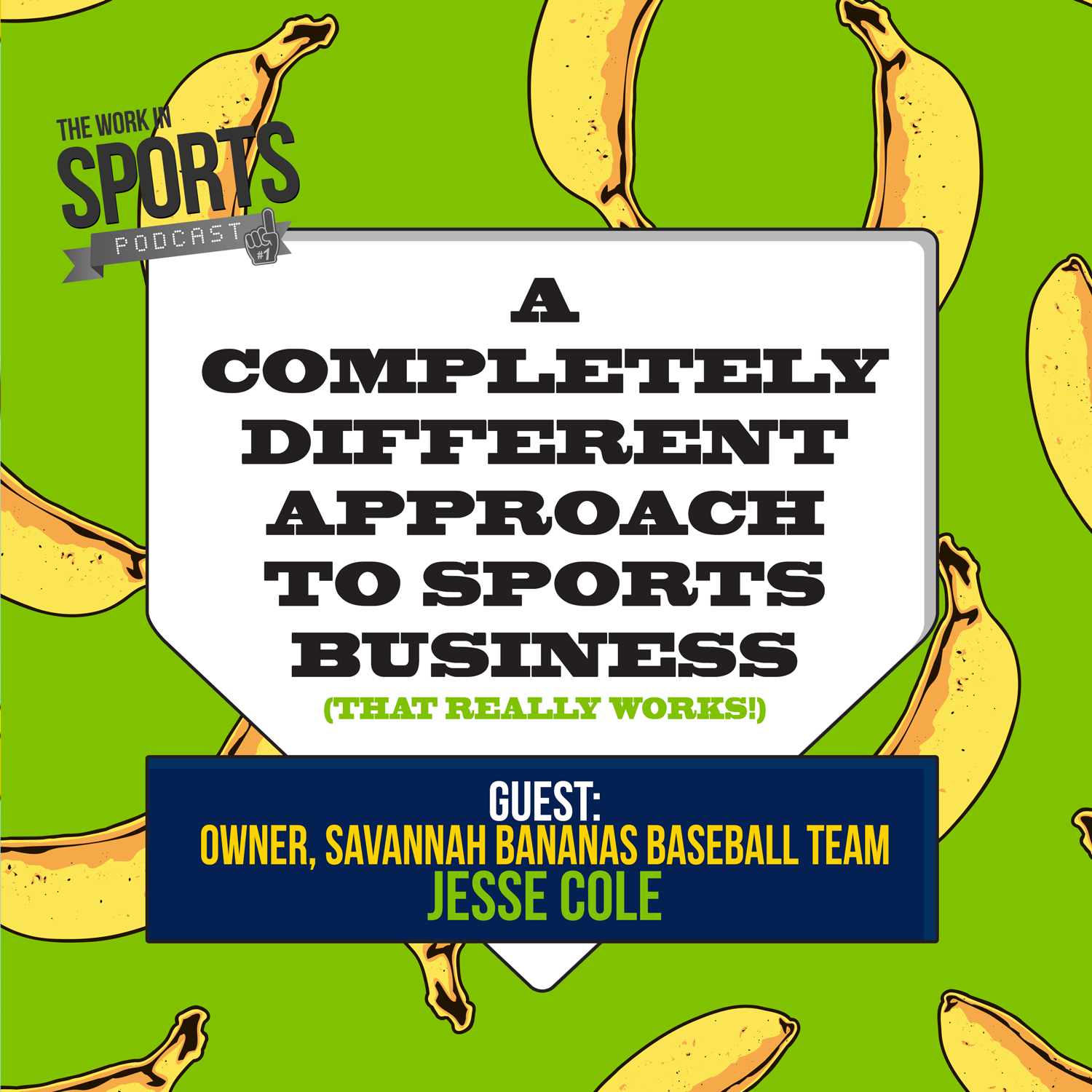 A Completely Different Approach To Sports Business (that really works!)

This sound, or rather song poisoning since I’ve been singing it in my head for the last 6 days, is the hold music that plays when you call the Savannah Bananas collegiate summer league baseball team offices.

And that is how this all started… and by this, I mean my 45 minute call with Savannah Bananas owner Jesse Cole that I’m about to let you listen in on.

In my near 25 years working in sports I’ve come across a few people like Jesse – crazy energy, enthusiasm, spirit and fearlessness. Jesse wears a yellow tuxedo to each game, social event and media gathering and is as much a part of the entertainment for his teams games as the Banana Mama’s dancing grannies act he has on the concourse greeting fans as they enter Grayson Stadium.

I’ve met showmen before. People who are all sizzle and little substance – Jesse is not that.

Jesse Cole differs from all the other greatest shows on earth – his business formulas are rooted in guiding principles and a belief system that is at his core. He may not talk margins, but I get the vibe he knows them well. He may not say return on investment but he knows when he invests his money where his cultural beliefs are, good things follow. He works on more than just instinct and passion, guts and guile – he has ‘it’.

He’ll talk about every touch point being an amazing representation of who they are as a team, culture and brand, which gets back to the hold music you just heard. Personal and memorable. That’s how they do things with the Bananas.

If it sounds like I am slobbering all over him – yeah I may be – because I was impressed, really impressed by Jesse Cole and that doesn’t come easy for me. I can tend to be grizzled and formed and have expectations for how things should be done. But Jesse opened my eyes to many things I had previously dismissed and I’m not going to lie, put a little smile on my face for a few days before I returned to my curmudgeonly self.

Many people can put on a wacky crazy show, but that honeymoon period will end. What Jesse Cole has done is create a culture, a system that infectiously spreads throughout all of the aspects of their business – from their community relations to their media outreach to their penguin dressed parking lot attendants (more on that later) and to the way they treat employees and fans.

Jeese’s company is called Fans First Entertainment – and it isn’t just empty words on a business card, it is the embodiment of a world he has created.

He says that he gets up early, reads, goes for a run and then starts writing down ideas – that is his routine and his mind rarely stops churning. I believe that and I think you will to – this could be the most informative, perspective changing, mind-altering podcast you listen to so get ready to soak it all in because here comes Jesse Cole…warning, we both talk fast.

*Let’s start at the beginning of this Savannah Bananas journey – you are a pretty young guy, how did you get into ownership of a baseball franchise?

*What was it you were inheriting and what were the first few years like?

*Did you have a revelation one day and see things differently, or did you always approach things from a different angle?

*When you rebranded the team as the Bananas – was the response immediate?

*When did the yellow tuxedo idea come into play?

*How big was your staff when you originally took over?

*What were the roles you had covered?

*How did that change after the team started to blow up – was it panic, like Oh crap we have all these holes now…or did you have it under control?

*What is your approach to hiring – what are you looking for in staff?

*Ok so now you have a bigger staff, you’ve hired the right people – minor league baseball is notorious for high turnover – how do you keep them?

*What is your game day like – what makes going to a savannah bananas game special?

*Ticket sales are usually the biggest piece of the revenue pie – but you guys are sold out for how long now? So how else do you maximize this business potential?