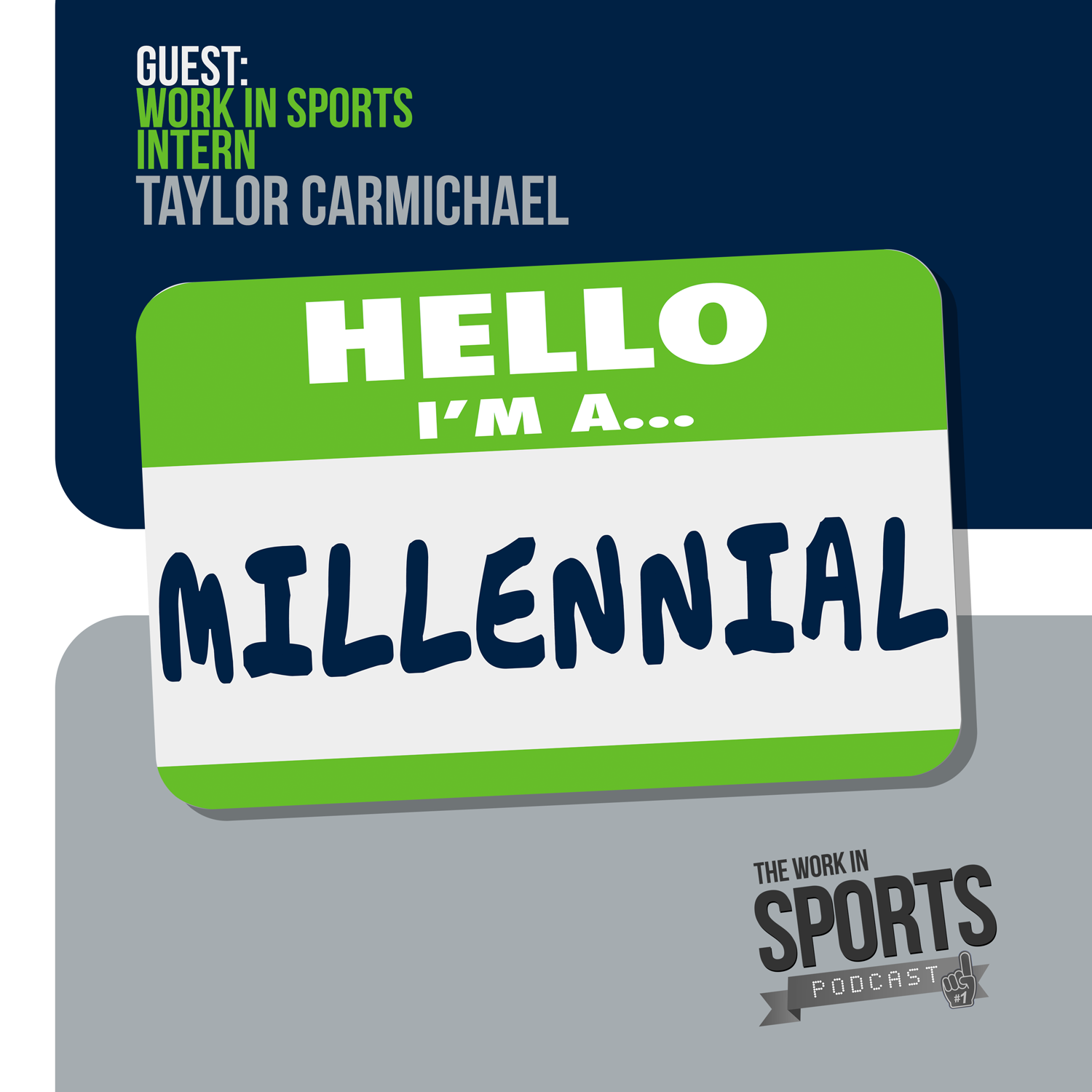 Millennials in the Sports Workplace - An Inside Look with Taylor Carmichael, WorkinSports.com Intern

Hi I’m Brian Clapp and this is the Work in Sports Podcast – I’m going to let you in on a little secret, I’m a 42-year old dude.

I’m in that phase where I think I’m young, but my kids remind me all the time that I’m not.

I didn’t grow up with a cellphone, or a laptop – heck I didn’t even get cable TV until my sophomore year of high school.

I remember we didn’t have access to Boston Celtics home games on TV because they were on cable -- but we got the road games on Channel 38 which you could get with just an antenna. I’d sneak down at night to watch Larry Bird play games in Milwaukee or Dallas – way past my bedtime – but it was all I could do to feed my sports appetite.

All this is to say the world is different now, and I can’t pretend to have all the answers that relate to a younger generation…so I’m bringing in a millennial expert today – our intern Taylor Carmichael from Arizona State University.

But before we jump into, what I think is an awesome conversation about Millennials in the workplace and the different challenges they face – let’s answer a fan question.

If you have a question – send it to me at bclapp at workinsports dot com – I’ll answer the best questions every week.

1: Just so everyone knows, I’ve told Taylor that while I am technically her boss, she is not supposed to agree with me today out of any obligation – I want her to disagree and defend her generation because let’s face it millennials get a bad rap.

Let’s start with a few assumptions and I want you to explain to me as a millennial if these are true or a myth:

Millennials are just mad at everyone who isn’t a millennial

My generation was mad about things – unemployment, high college debt, high cost of living – but we answered that problem by listening to Pearl Jam and brooding.

Millennials to me are more active with their disdain which makes some people say “who do you think you are?”.

Millennials are lost without their phones and can’t write more than 140 characters at a time.

Millennials don’t want to work for anyone or play by anyone elses rules – they spend a lot of time figuring out how to “f*** the man” I’ll beep that out.

I was reading this morning that Millennials are the largest generation making up nearly 40% of the population…which is nuts. So your crew is the future of the workplace in every industry. I wrote a piece a few months back about how we need more millennials in the workplace and that employers shouldn’t be afraid of what millennials aren’t they should embrace what they are… I gave some brilliant reasons…and it got slammed.

People said I was shortsighted, that I was giving out participation trophies, that I was an enabler…Why do you think people have such a negative reaction to Millennials in the workforce?

“By and large, they’re not as driven as my generation,” retired Morgan Stanley CEO and chairman John Mack recently complained about us. One survey found that only 55 percent of Americans think young adults work hard – How would you answer someone like John Mack?

So my wife and I went to Europe a few years back and it struck me – we visited Charlemagne’s castle in Germany which was built in 790. Then we visited Edinburgh castle in Scotland which was built 400 years later. 400 years had passed but the architecture, the structure, the design – wasn’t all that different. The world hadn’t changed that much in 400 years.

The world has changed dramatically and your generation has grown up differently than Boomers or Gen Xers so of course you are going to be different.

I kind of think it is unfair for anyone to expect your generation would be just like them, because the world is a different place and you have adjusted.

Or am I just enabling your generation?

I met with an executive recently and he voiced his anger at Millennials saying there is no loyalty – they’ll jump to a different job even after I’ve worked my butt of to train them. He was mad. But I presented him with an idea – I said if you want loyalty, why not give a little stability in return.

So here is your scenario –

A: You graduate next year and you get an offer from ESPN – the money isn’t great, you have to move to middle Connecticut, there is no promise for how long you’ve been employed…but it’s ESPN.

B: You graduate next year and you get an offer from a regional Sports Network, it’s about the same money but they offer you a three-year contract…

Be honest – which job would interest you more?

1: To date who is the best boss you’ve ever had?

2: Which social platform do Millennials really hang out on most?

3: My daughter just turned 10 and is in 5th grade – when should I let her get a cell phone?

4:  Where is your dream job after you graduate?

5: How many days could you survive with a broken phone?