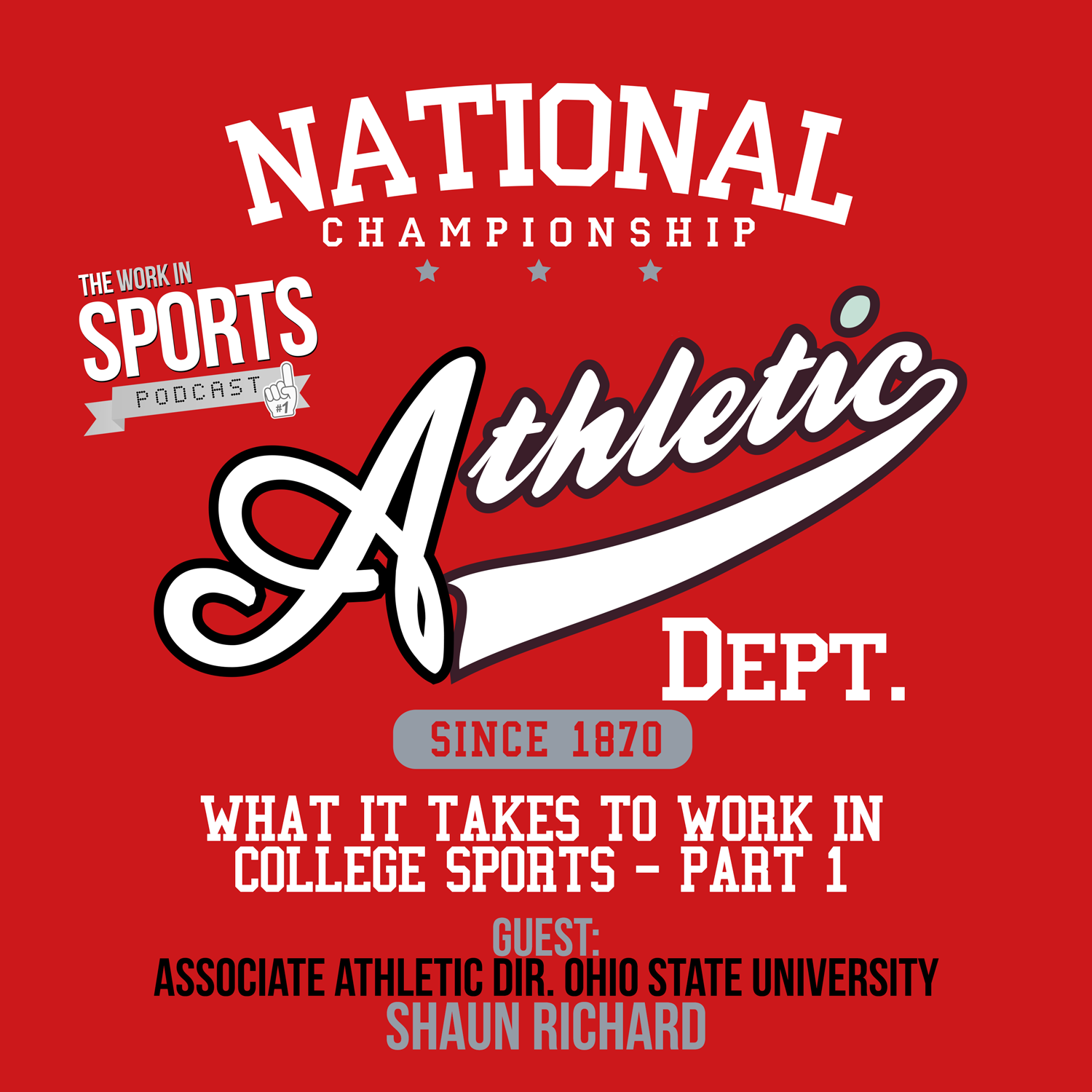 This is part 1 of my interview with Shaun Richard from Ohio State, we focus in on what the job of being an athletic director consists of and the challenges of working in collegiate sports.

In part 2 Shaun and I dive into what you need to do to prepare yourself to work in college sports, should you get your masters, what are the skills schools want, how to network and so much more. Give both parts a listen and subscribe to the Work in Sports podcast already!

If you have a question you'd like us to answer on the show, email me podcast@workinsports.com. We're listening, and if we feature your question on a show, you'll get a free month of full access to our site!

I’ll admit I have blinders for pro sports. I grew up in Boston and outside of a nice few years of Doug Flutie, college sports just weren’t that big up there. Our pro teams, now that’s a different story.

I also went to a University that isn’t from a power 5 conference, more like a puny 55. The sports while I was in college were purely enjoyed for tailgating purposes.

This fact has translated to our first 29 podcasts, not a lot of talk about college athletics. Fan of the show Nathanial Gale pointed this out to me via linkedin, asking me point blank: I want to be an Athletic Director at a power five conference, how do I make that leap?

Well, since I promise not to be fake or inauthentic, I told Nathaniel, I don’t really know.

A decade or two ago I wouldn’t have been able to say those simple few words “I don’t know”, because I was afraid that would be a sign of weakness. I couldn’t be classified as weak, so I had to ACT as if I had answers for everything.

This is not real. It is not authentic.

You don’t have all the answers, neither do your bosses, your parents or some self-help author claiming to know the formula for greatness.

Practice it with me, say it aloud: “I don’t know”.

These aren’t banished words. They do not make you incapable, they make you honest. And if followed up with the right combinations of words right after “I don’t know” they make you even more powerful than before.

Now we’re on to something. Honesty mixed with hustle.

So you know what I told Nathaniel – “I don’t know…but how about I get a guest on the show who is in college athletics to answer your question?” He seemed to like that idea.

I went to social media and I found Shaun Richard Associate Athletic Director for Ohio State University…now that would be a good get. So I asked, and he said yes.

In fact, Shaun and I talked for about 55 minutes about the world of college sports, so I broke this interview into two parts. The first part is all about the job itself, what does it take to work in college athletics, how does it operate, what are the challenges.

The second part, which we’ll debut next week, will focus on you. What you need to do to achieve the heights that you want in your sports career.

Here we go, part 1 with Shaun Richard…my new pal at Ohio State who has convinced me to be a bigger college sports fan…

1: In your role at Ohio State you have “oversight of: Field Hockey, Men's Soccer, Men's Hockey, Women's Gymnastics and Baseball.” Oversight is such a generic term – break it down for us, what is your role with these teams? 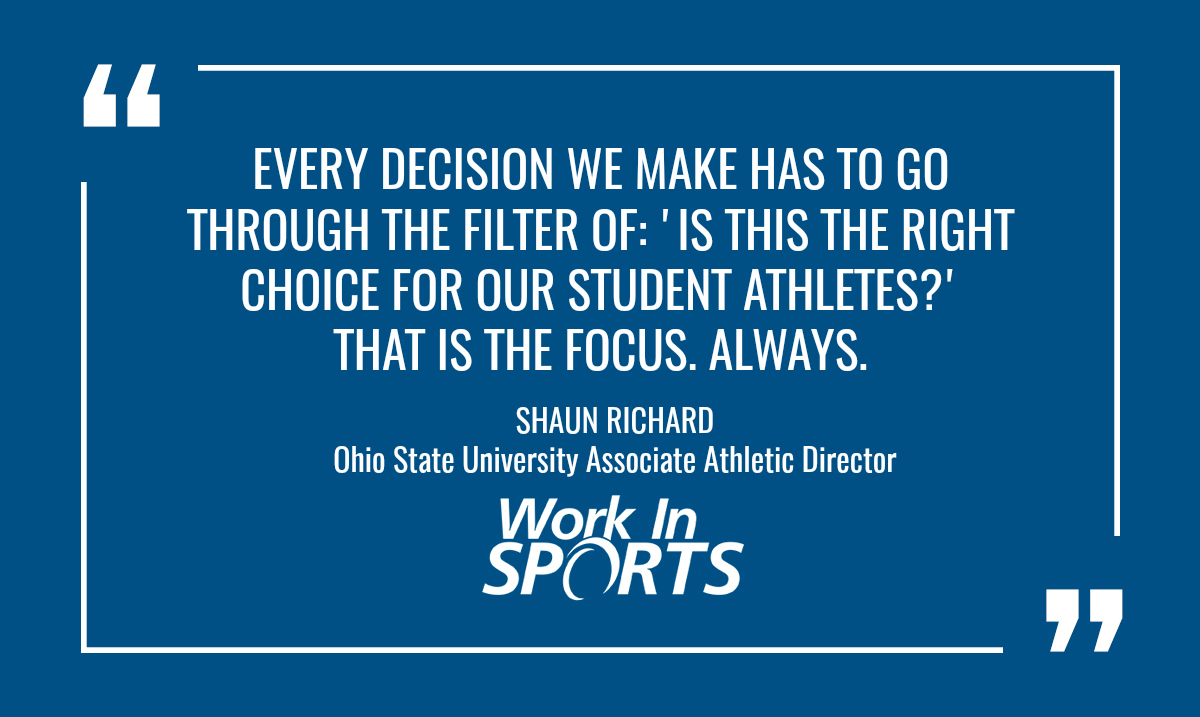 2: There are so many intricacies to being the sports administrator for a team – as fans, we don’t always consider what goes into running an operation like a collegiate sports team – how did you learn the skills to be qualified in all of these areas?

3: You started your career in professional sports as an operations assistant with the Miami Dolphins -  in fact, you were a part of the Advance Operations team for the 1st international NFL game in London – how did being a part of a pro team environment prepare you for your current work in college?

4: College and pro sports are both big businesses – having been on both sides, are they much different in how they operate?

5: Colgate has around 2800 students and is in a rural area of New York – Ohio State has over 66,000 students. You published a paper on athletic marketing strategies in rural areas – which I read and enjoyed as I prepared for this interview… did you just throw it out the window on your drive to OSU? 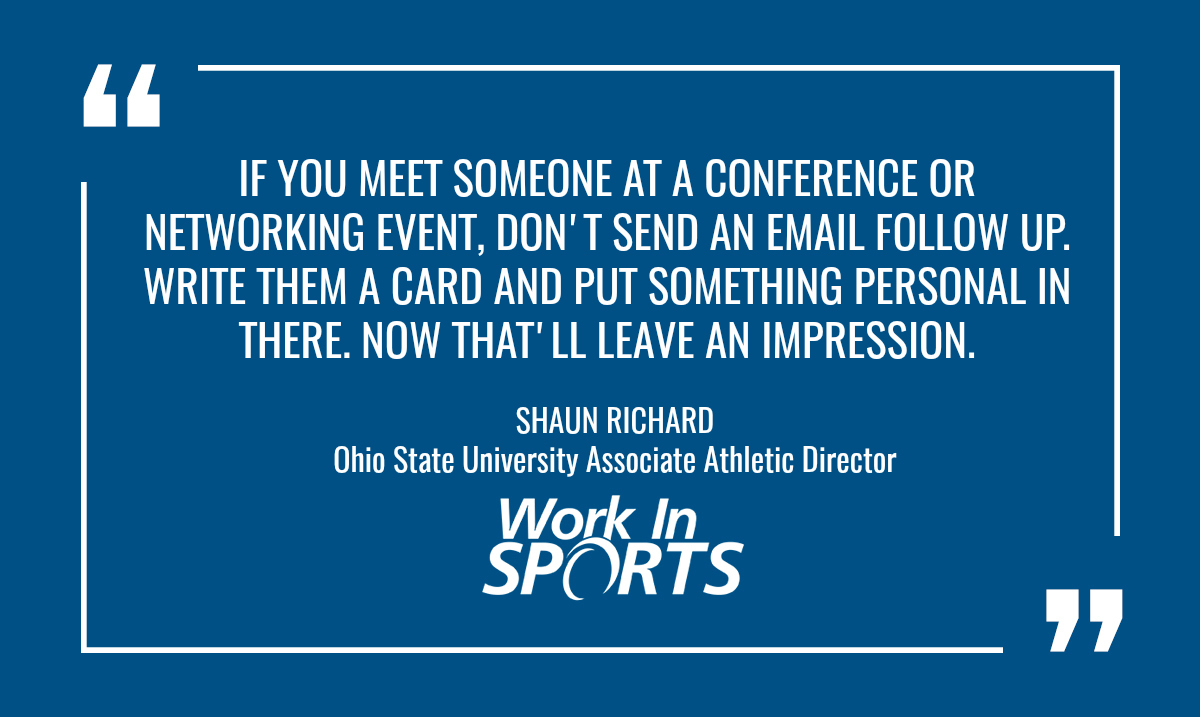 In all seriousness, after making the jump to a huge program like OSU, have you been able to apply some of the same techniques you implemented at Colgate to market events… or did you have to start from scratch?

6: There is a saying that a rising tide lifts all boats… and I wonder if that applies to college sports. Does the success of the football team raise the profile of the sports you manage…or does it cannibalize the potential market?

Part 2 of my interview with Shaun Richard will in clude our lighting round questions, including one about Shaun being a student athlete himself and that allowing him to relate to the student athletes he works with at Ohio State. Good stuff!