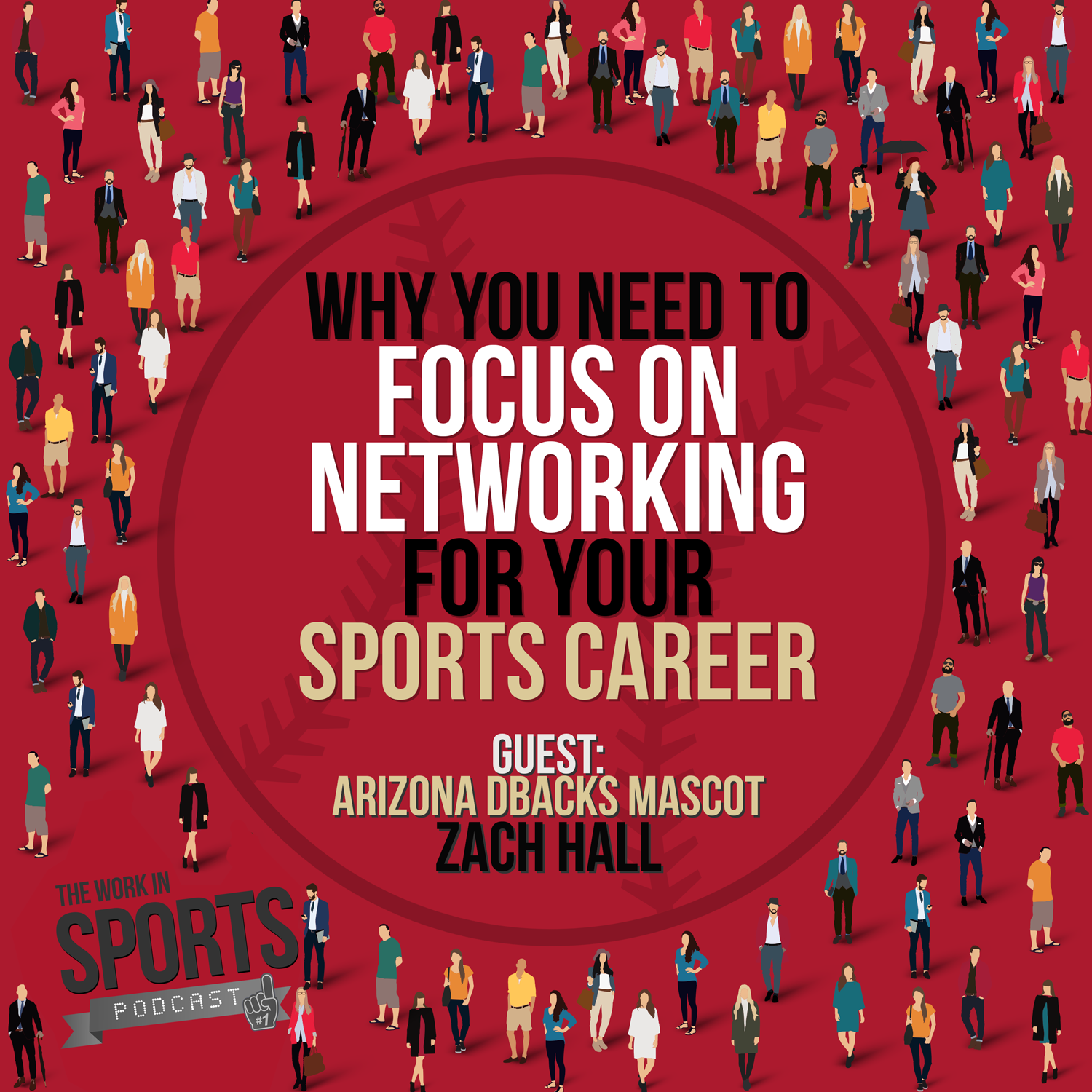 Hi! Welcome to the Work in Sports podcast – I’m Brian Clapp Director of Content for Work in Sports – today on the podcast we have Arizona Diamondbacks mascot and author of Don’t Sleep on Planes, Zachary Hall.

A little backstory here - After I decided we should launch this podcast my boss – Work in Sports CEO John Mellor – reached out and said you have to have Zach Hall on as a guest.

My first thought was, OK a mascot is a pretty cool gig, but will this really speak to a large portion of our audience? Are there enough people out there interested in this form of entertainment?

And to John’s credit he said – read his book and call him.

Zach’s book is on networking, and what makes his story and techniques so inspiring is that he took advantage of his opportunity. Here’s what I mean. Zach is a professional mascot, which means he is very often at major events within the city of Phoenix, rubbing elbows with important people. And instead of staying in character or acting as a wallflower once his mask came off, he started reaching out and talking to the important people around him.

He used networking to further elevate himself, and to help others.

As a self-confessed terrible networker, I wanted to learn more about his mascot life, but also his networking concepts.

There are many parts of this interview that you can put into action today.

Before we head down that road – a question from a fan, Rochelle from Dallas wants to know if being a student athlete is something that will help her get a job in the sports industry.

If you have a question – email it to me, bclapp at workinsports.com ---

1: First things first – you’re a mascot for the Diamondbacks. How did this happen?

2: Did you have a mentor or someone that inspired you to enter this field?

3: Basketball mascots have to do more flips and dunks – whats the most reckless thing you’ve had to do in the spirit of fan entertainment?

4: Are you considered a part of the marketing staff, community relations – how does it actually break down within the team?

5: Percentage wise – how much of your time do you spend on the field vs. in the community? Which do you prefer?

6: For fans outside of Arizona – what is your go-to move on the field?

7: Lets’ jump out of the bobcat suit and talk about your book. Don’t Seep on Planes – which is a title I love by the way – and it’s all about the importance of networking and the how to steps anyone can implement – lets’ start with an easy one… when and why did you determine that networking would be such an instrumental part of your career?

8: You tell a story in the book about meeting a high level executive on a plane ride to vegas – hence the title of the book – tell us about that event and what it led to for you.

9: This may be hard to acknowledge but I’m a bit of an introvert when it comes to networking – I see myself as a bother, so I just keep my head down – how can an introvert still make their way in networking?

10: What about outside the field of play, do you have a different way of getting to know complete strangers?

You’re at a mascot conference there are celebrity speakers, team executives, athletes – it’s a potpourri of potential sports industry connections…the conference is ending everyone is dispersing and you only have time for one more meetup -
A: A B+ level celebrity is walking one direction…
and
B: A team executive is walking the other…

Who do you choose to approach and why? What do you say – what is your ice breaker?

1: Who is the coolest mascot in sports and why?
2: I’m in Philadelphia – any inside knowledge on what exactly the Philly Fanatic is?
3: Tell us about one idea or stunt you tried that failed miserably?
4: It’s hot in Arizona and Bobcats have lots of fur – what do you wear under the suit?
5: Who is your dream networking connection? The white whale of industry connections

Zach has a lot of energy – I’m not sure if you noticed, but I found myself trying to up my pace to keep up with him!

I’ve read Zach’s book and it’s a good read people – lots of actionable advice in there, and in fact it’s helped me on a few occasions lately, put on my big boy pants and talk to some people I would have usually avoided.

I need a favor from you – I’ve you like what you are listening too give us a review, subscribe, download, email me questions. We want this to become a big learning community.

This is our passion – at Work in Sports we are all about helping you find a job in the sports industry through information and access.

Next week Philadelphia Eagles Director of Talent Acquisition Colleen Scoles – I’ve already conducted this interview and it’s fantastic. Colleen has some great advice on what pro teams are looking for in their hires and how to grab the attention of recruiters for the right reasons.