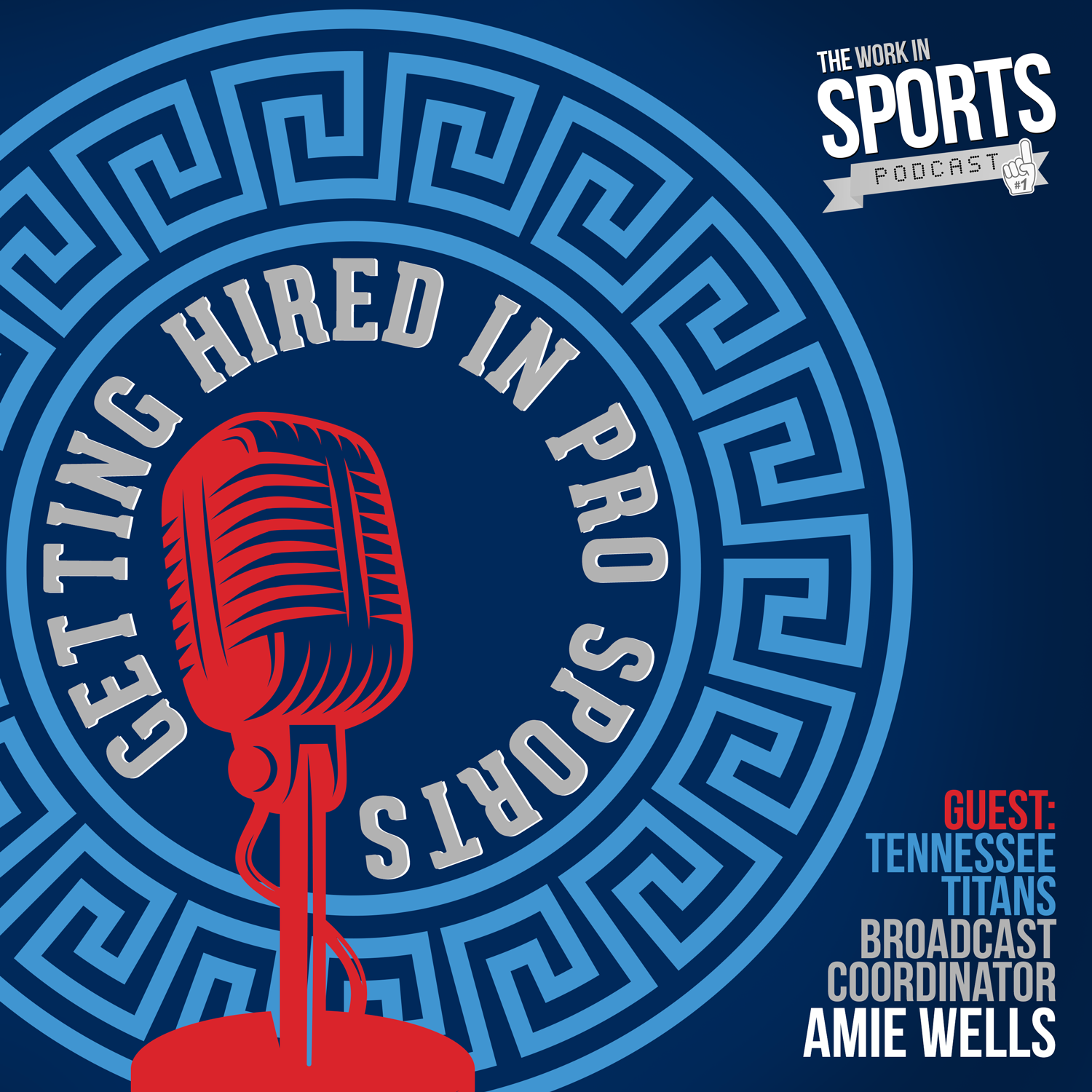 Amie Wells, Tennessee Titans Broadcast Coordinator joins the show to discuss how she got hired in pro sports, the challenges of covering the NFL Draft, what she'd get tattooed on her face and much more about working in pro sports.

Hi everybody I’m Brian Clapp Director of Content for WorkinSports.com and this is the Work in Sports podcast – It’s NFL draft week, which is probably the most exciting non-event moment in the sports calendar, then again, maybe I’m just an insatiable sports dork.

I have analyzed this draft phenomenon and I think it’s a parallel to life – stick with me here as I turn into creepy meditation guy – but think about it, why do we love the draft?

It’s a microcosm of hope. These athletes that are available give you hope your team will improve and make them better for the next year. The draft is a major part of the enjoyment algorithm for the upcoming season – current roster + free agency + draft = potential! And potential means exciting!

Plus, it’s an immersive thing.

Free Agency is cool because you don’t really know what will happen and it’s all play money anyway… but it’s all just hitting refresh on your phone throughout the day and seeing what happens next. Breaking News banner, after Adam Schefter report, after Ian Rapoport buzz.

But in the draft there is a sense of order, or dominoes that affect one another and so it plays out with more drama and build up. Team X does this, and that changes the move your team is going to make.

Hope, in this example, is a tease – you go in expecting something, and then it all gets thrown out of whack when the Browns draft Baker Mayfield #1.

Am I going to far with this?

I don’t think so – I love the draft because I love the NFL and the season never really stops. We aren’t in the game season, we’re in the team building season and it’s nearly as exciting.

So what happens when you work in the NFL? It’s a dream job for many, but what is the day to day like?  What is the off-season like? What is game day like vs NFL Draft day?

I’m fascinated by this world, and I think many of you are as well. Which is why I brought on Amie Wells, Broadcast Coordinator for the Tennessee Titans.

She’s the swiss army knife of the Titans broadcast team – doing on camera reports, hosting a radio show, hosting a podcast and telling the players stories from an embedded world behind the scenes.

I’ll be honest – her job is awesome, and I’m jealous. That may come through a bit during this interview as we talk about everything from draft coverage to building relationships and trust with the athletes she covers. We also dig into how she started in PR but transitioned to the content side… and a whole bunch more.

So here she is, Amie Wells (@TitansAmie) broadcast coordinator for the Tennessee Titans!

1: You have a big week this week with the NFL draft coming up, I know you are traveling down to Dallas as part of your role as a Broadcast Coordinator with the Titans, so first off thanks for squeezing this in. 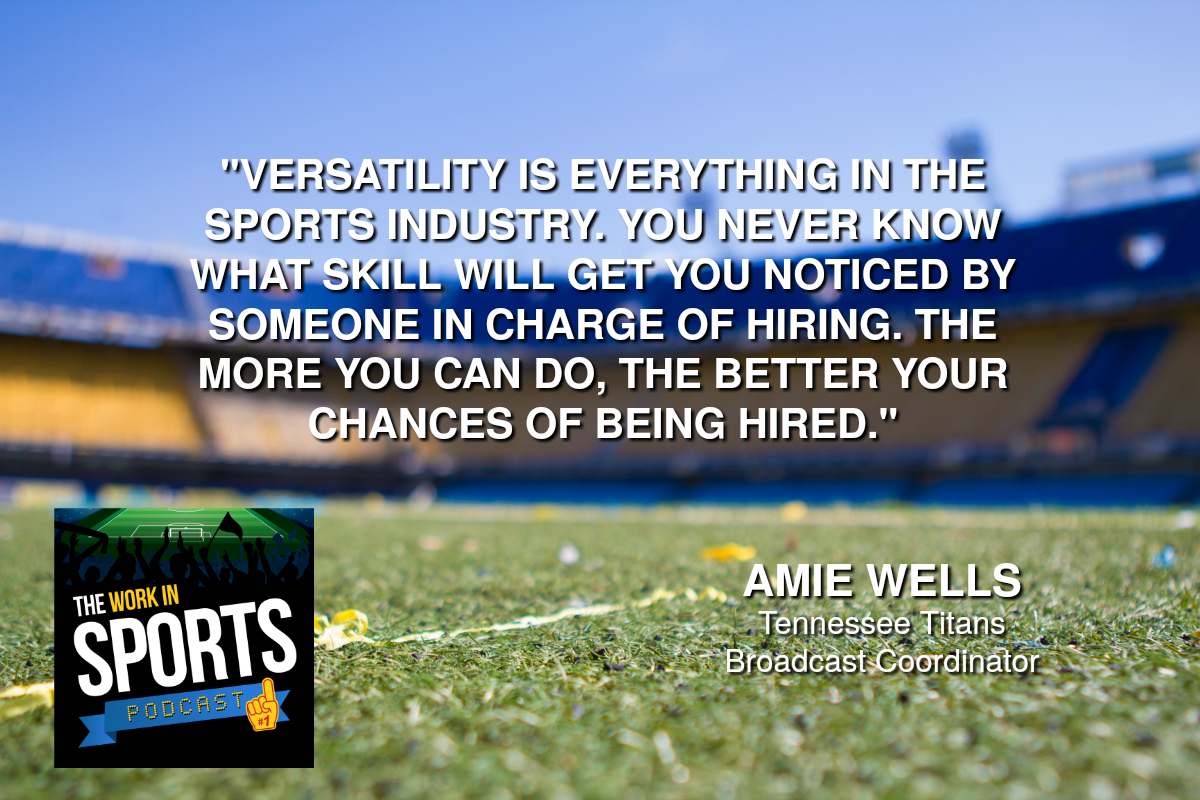 Let’s talk about your role with the Titans, you’ve been there for just about 5 years now, what are the responsibilities of your job and how have they changed since you first started?

2: Let’s talk about the draft, it’s the biggest event of the NFL off-season, what do your responsibilities look like this week? 2a: tons of unique content – how do you enjoy that challenge of coming up with unique content?

3: Were you able to attend last years draft in Philadelphia – what did you learn from that event that will prep you for this year?  We’re you able to start building relationships and trust with some of the players that were drafted?

4: As someone who has worked in the sports media for two decades I find building trust and a personal relationship with players can be hard – how do you go about making the players feel comfortable talking with you and getting the best out of them?

5: I want to pivot back to your early career a bit – you worked as a sports reporter in college at the University of Missouri, and then had two different internships in PR with the Colts and Ravens, what was the big thing you learned during your internships about life in pro sports? 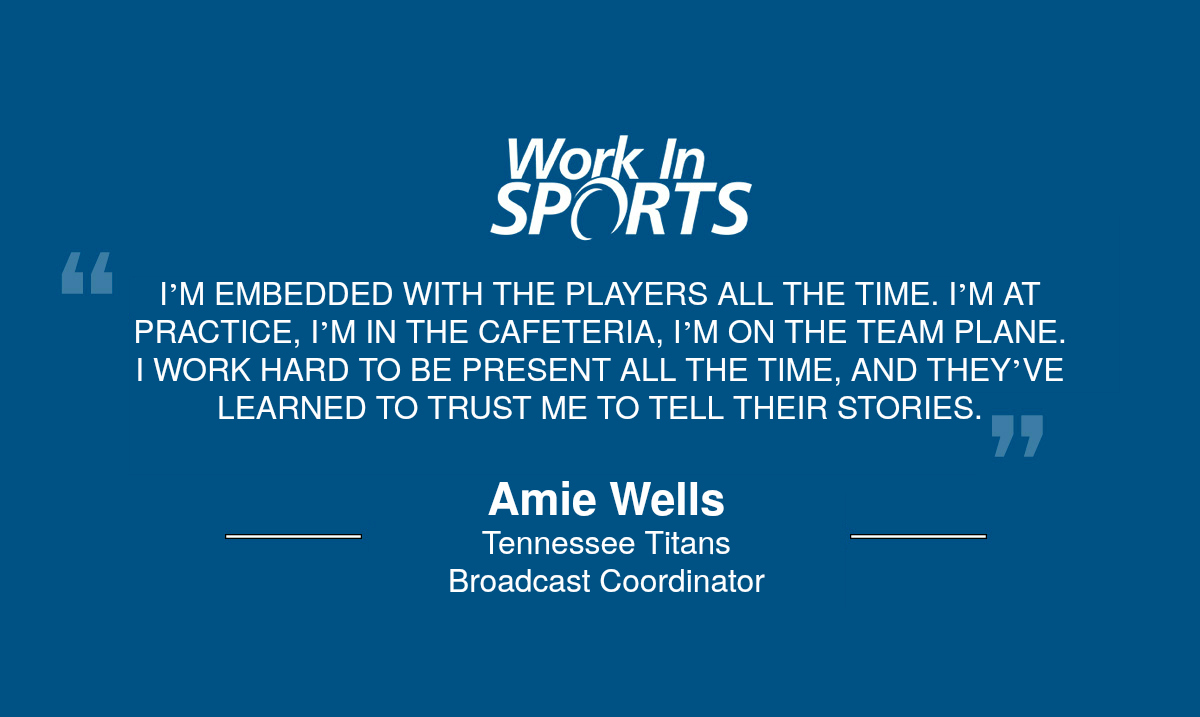 6: After your internships what was your strategy to turn your experience into a full-time job?

7: Many people want to work in pro sports – looking back, and please be honest, why do you think the Titans hired you, was it a specific skill you had that they needed? Was it your overall background? What do you think the secret to getting hired by a pro team was?

8: You not only work in front of the camera, you also edit video, host a podcast, write, create content in multiple formats, promote on social media -- how important is it to be versatile in the sports industry?

9: What is game day like for you… do you have specific tasks, or does the day kind of mold and change based on what happens on the field?

10: We have this private Facebook group for fans of this podcast and before each interview I ask that group what questions they want to ask, then I pick out a few of the best. Jillian Eliza was very excited, she wanted to know if you have any advice for someone with a background in PR, like you, who wants to transition to the broadcast side of things, also like you… 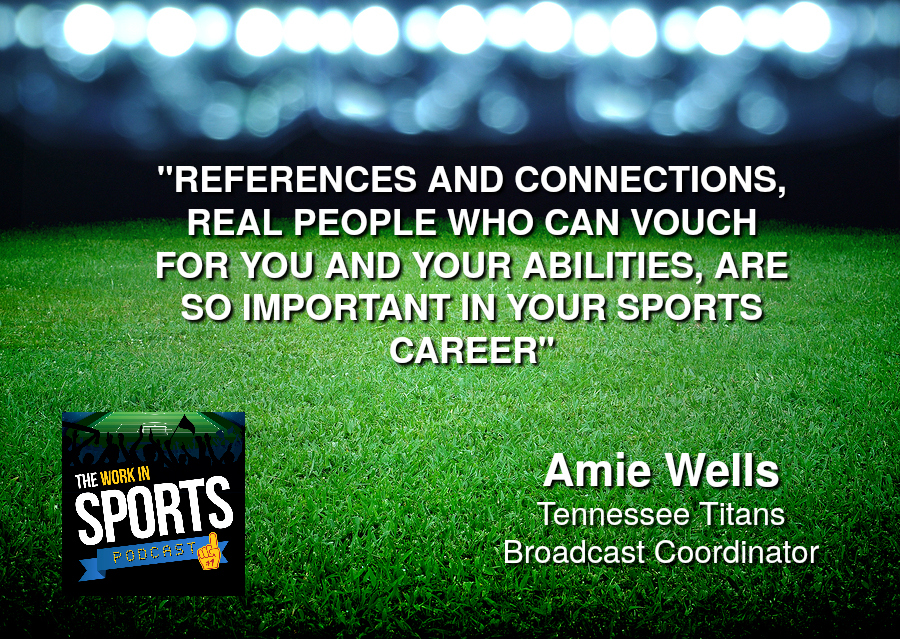 11: Ty Oney wanted to know do you think working in PR prepared you for your current role on the broadcast side of content?

12: You unique Titans content on the TitansOnline website, the official titans podcast, the weekly radio show with Keith Bulluck, the weekly TV show… do you have a favorite storytelling format?

13: If a young girl came up to you today and said “I want to work in sports like you someday” what advice would you give her that could help push her onto her dream? That’s all – thanks so much Amie, everyone should go to TitansOnline and click on all of Amie’s stories, download the Titans official podcast, listen to her radio show… we’re going to be busy following you everywhere...