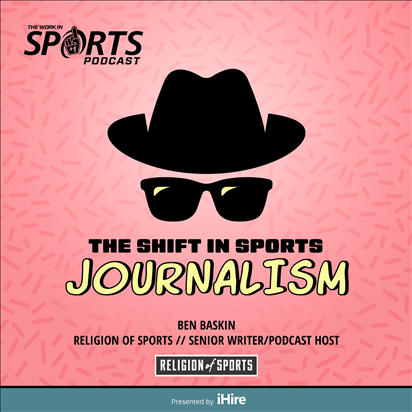 Ben Baskin, Religion of Sports: The Shift in Sports Journalism

If we have learned anything over the last year, it is that we all must constantly adjust, or we will watch the world pass us by.

Quick story – in 2006 I went to Europe for the first time, my wife was competing in a field hockey tournament that took us to Germany, Amsterdam, Scotland and Belgium. IN Germany we visited Charlemagne’s castle – not Charlemagne Tha God, the Charlemagne who was the King of Franks.

The castle was amazing, just what you’d expect a castle to look like built in the 790’s it had the turrets and the grand ballrooms, lots of castle stuff.

Later when we went to Scotland, we visited Edinburgh, another beautiful castle built in 1103. 300 hundred years later.

What struck me is that extraordinarily little had changed. The architecture, building processes, planning and arrangement of spaces – no

t particularly different. I’m sure some historian would argue with me, but it was Castle v Castle, and they were remarkably similar despite being 300 years separated.

That is not the world we live in anymore. Things change exponentially every 5 years. Everything changes.

This about your life in 2016 – sounds like a long time ago, right? Think about your phone, social media, analytics, electric cars, self-driving cars – ever

Will you adjust, or will you stand pat trying to slow down the world and make it fit what you remember and like?

One of the many things that strikes me about today’s guest Ben Baskin, Senior Writer and podcast host for Religion of Sports, is his ability to adapt without sacrificing what he loves.

Ben got his master's in journalism from Columbia, worked at Sports Illustrated for 5 years, loved in-depth storytelling and research and reporting. If you told him he had 10,000 words on the Chicago Bears he’d salivate trying to figure out the best angle and the best reporting to craft his missive.

But the world changed under his feet.

Ben could have pined for the old days, and maybe in his quiet moments he does, but I like the action he took instead. He took his long form story telling chops to podcasting, crafting, really crafting amazing stories for his Lost in Sports podcast. It is my favorite show, Ben is my favorite storyteller, and you must start listening to this amazing style of content that should captivate and engage all of you.

Ben adjusted his craft to fit the audience demands, and it worked. Will you do the same when faced with a similar challenge?

This conversation is amazing, buckle up we have a lot of sharing to do. Here’s Ben Baskin.

1: We have a lot to talk about regarding sports journalism and today’s era of content, but before we get into those weeds, let’s talk about Lost in Sports.

I love your podcast – for those in the audience who haven’t listened, just give them a little taste of what the show is about.

2: I listened to my first episode where you uncovered the Cleveland Browns 1986 Masters the Gridiron movie, which I have now watched 10ish times. I’ve been in the sports industry for 25 years, worked with many Browns fans, and never heard a peep about its existence.

When you discover something, dare I say magical, like this, what goes through your mind?

3: I churn out two episodes a week, and they are far less produced and intensive than yours, but it’s a challenge staying fresh and interesting– what is the overall process for you going from idea to final product and how long does it take?

4: A big part of being a journalist is being creative, coming up with angles, pitching story ideas. Is this ability something that has always come naturally to you, or did you have to refine this skill over time?

Follow: We’ll get into the Sports Illustrated years soon, but in regard to pitching stories, I think I’d be nervous wreck pitching ideas in an environment like that – does that take extreme confidence?

5: I find that many young people today want to jump right to hosting their own podcast or their own YouTube channel, convinced they will be the next big thing. Nothing against that, love the gumption, but you really developed yourself and earned this spot.

UVA for undergrad, master's in journalism from Columbia, 5 years at Sports Illustrated as a reporter and staff writer before joining Religion of Sports and getting this creative outlet.

How much did that process of growing and learning and finding your voice help you be ready for where you are right now?

6: Let’s go back to those Sports Illustrated days – you get your Masters in 2014 and get hired as a reporter at SI. Pretty big time. What do you remember about the first story they put you on?

7: You primarily covered the NFL during your time at SI – how hard is it to break in as a new voice with competing writers who have been out there for decades and have established brands? Was it a struggle to build connections, get sources and gain credibility?

8: Looking back at those early days getting started, anything you would have done differently?

9: Success at a place like SI must be getting a cover story. I know from Lost in Sports that you had a cover story on the Browns in 2019, was that your first and if so, was that the most pressure you’ve faced in your journalism career?

10: The world of sports content creation has changed exponentially  since I got into the industry, and I’m sure you feel the same way.

Does it bother you as a wordsmith to know that people aren’t really reading longform storytelling anymore, or have you embraced the change and ridden the new media wave?

11: As an avid consumer of content, your podcast is exactly the type of quality sports storytelling I want. I don’t have time to sit and watch a 4-hour baseball game anymore...but I can listen to an interesting podcast while doing other things.

Religion of Sports has leaned into this concept of Audio and Video storytelling – taking longform content off the page and making it more dynamic.

I love it, but I’m a data point of one. What has the audience response been like?

Follow: When I was at CNN/SI Ted Turner and Jane Fonda would walk in every once in a while, because they literally owned the place. Does Michael Strahan or Tom Brady ever video bomb a zoom call just to see what’s up?

12: Your latest Lost in Sports episode covers Evander Holyfield’s ear getting bitten off by Mike Tyson during a fight. This was from 1997, I was in my second year as a Production Assistant at CNN/Sports Illustrated and it was madness as it happened live.

Does it strike you as you cover some of these lost stories in sports from earlier decades how different athletes were before social media?

13: Is it harder to be a journalist now because everyone has a tool, they carry around in their back pocket to amplify their own message?

14: We’ve thrown out a lot of words like creative, assertive, confident – if you were advising young people trying to get into this era of sports journalism, what skills or traits would you advise they lean into? 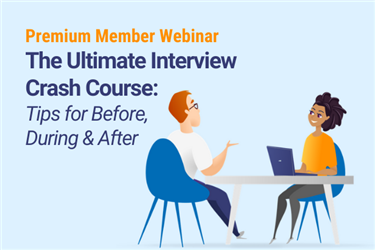 The Ultimate Interview Crash Course: Tips for Before, During & After [Premium Webinar]

Tune into this session and learn what to bring to your next interview, what to wear, how to answer common questions, when to follow up, and more!

How to Handle a Lowball Salary Offer

Lots of Job Interviews, No Job Offers. What Do You Do Now?