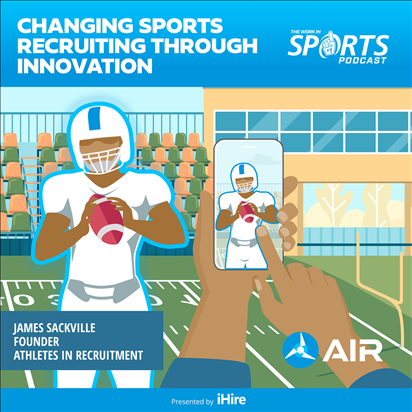 Hey everybody, I’m Brian Clapp, VP of Engaged Learning at WorkInSports.com, and in this episode of the WorkInSports podcast, we jump into college recruiting.

To set the stage, I’m going to share one of my favorite sayings:

“If something is wrong, fix it if you can. But train yourself not to worry: Worry never fixes anything.”

Worrying is usually a waste of time, so I train myself to the best of my ability not to worry. Even worse than that are the people who blame and complain. 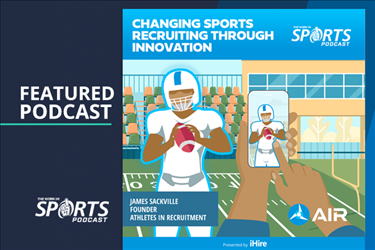 Most people see a problem and think to themselves, “I have four options”:
•    Blame someone else
•    Complain about it on social media
•    Worry incessantly
•    Fix the problem

I think that is why I am so drawn to entrepreneurs. They see a problem that either affects them or countless others and say to themselves, “I can fix that; I have an idea.” And it doesn’t stop there – an idea isn’t viable unless you can execute it. Successful entrepreneurs have an idea, put together plans, generate interest and funding, establish teams, lead people, and in the end, create something that changes us.

That takes me to the world of college athletics recruitment. It is a high-pressure field that literally makes or breaks coaches’ careers. Despite the emphasis and importance of recruiting well, that area has a lot of problems, and today’s guest, James Sackville, has begun tackling (pun may or may not be intended) those challenges. James took what we would call a circuitous path to the college athletics gridiron. James hails from Melbourne, Australia, and became a Division I starting punter at Southern Methodist for four seasons.

While in school, James became dismayed by the recruiting experience he and his teammates lived through, so he set out to fix it and make recruiting a more equitable fair market experience.

In May, he launched Athletes in Recruitment (AIR), a three-sided platform that's a cross between LinkedIn and a dating app – but for recruiting. Athletes can promote themselves to coaches, compare themselves to their peers, and “swipe right” on colleges they’re interested in. Coaches can also sort, filter, and swipe on a prospective athlete based on their recruiting needs. The relationship doesn’t end there; AIR's third side is for liaisons: a high school coach, private trainer, parent, or guardian who can advocate for high school athletes and act as an intermediary.

Catch the full episode for James’ perspective on topics, such as the below questions:

1.    What problems did he see in the recruiting process?

While it made some sense that James fell through the cracks based on being international in an American-dominated sport, he played collegiately in the football hotbed of Dallas, Texas. He heard similar stories about teammates struggling to be noticed when they were in high school and figured that if this was an issue where there is a high concentration of football interest, there was a systemic problem in how college recruiting worked.

2.    What does Athletes in Recruitment do to help prospective college athletes and coaches?

Essentially it is LinkedIn and a dating app for college recruiting. Student-athletes can put together a recruiting resume for coaches, compare themselves to peers, and swipe left or right on universities that they are or are not interested. Coaches have the ability to do the same, where they can sort, filter, and swipe on a particular student-athlete based on their specific wants and needs.

In a consumer-facing society, there are only 2,000 schools (130 Division I FBS), and there is a desperate push on the athlete side to get noticed and be among the six percent of high school athletes who play collegiately.