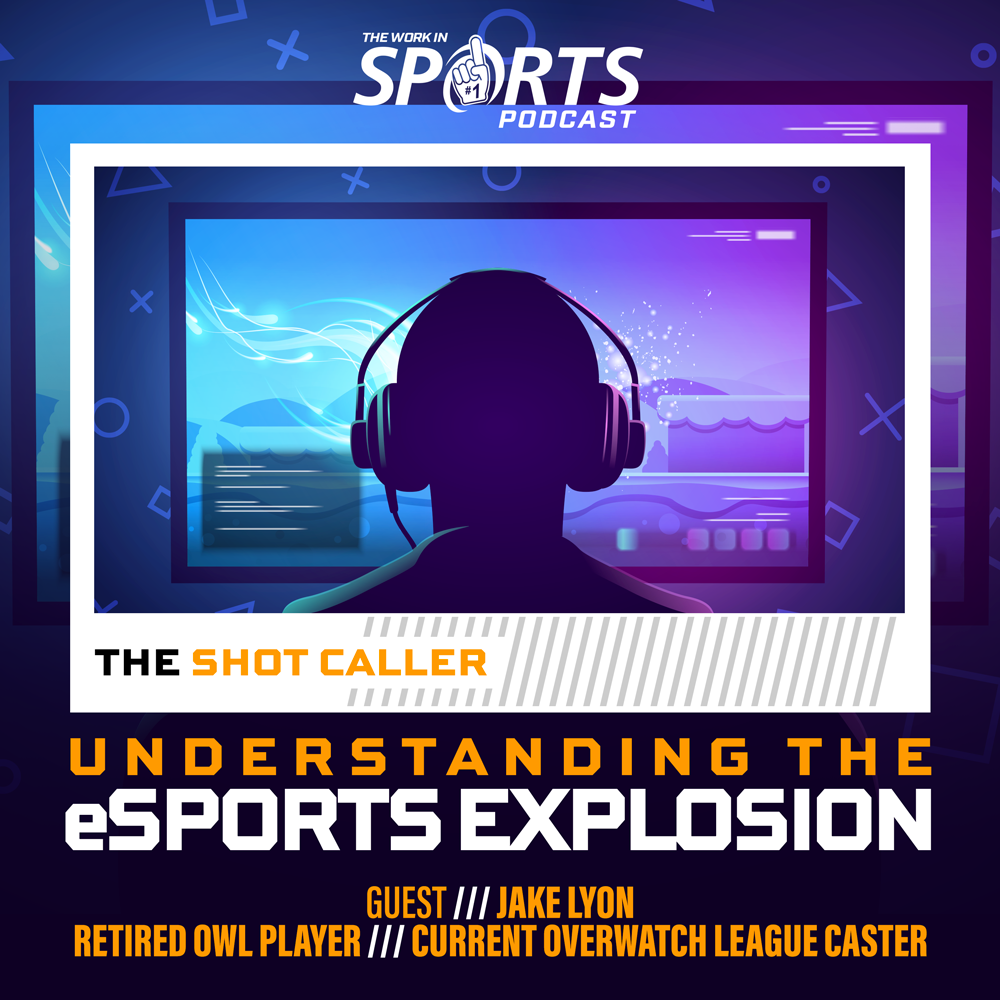 Prepping for this week’s interview was unlike many of my other weeks. Most of the time I have a pretty good vibe for the person I am going to speak with, their role, their struggles, their big goals - and can lean into that in my question development.

But sometimes when you reach outside your comfort zone, it can be quite exhilarating.

I’ve made it clear on this show multiple times prior that I am not a gamer. I don’t know the lingo, the leagues, the competitors -- but I am fascinated by the eSports ecosystem and subculture. Not in a - I want to give that a go way - more of a, this thing is huge, fans are dedicated, brands are flocking to it...I want to know why and better understand it.

I’ll admit, and my wife will concede, that sometimes I avoid doing things I am afraid to fail at.

The challenge of rebuilding our staircase I put off for quite some time because I was afraid to put tons of time and effort into it, and have it look like crap in the end.

The challenge of researching and understanding eSports, and booking more guests connected to it, is something I’ve put off because what if at the end of it all, despite all the research and attempts, I come off sounding like an out of touch moron.

Our internal monologues protect us from failure, but also sometimes prevent us from trying.

Well, thanks to our awesome graphic designer Chris Culp who designs all of the podcast episode artwork for us, he broke me out of my shell without me even knowing it. He basically booked today’s guest and said - “hey I think you should do this” -- panic panic panic.

Truth is, I went through my normal routine -- reading articles on the person, videos, background, social profiles and become quickly inspired to ask the questions you’ll hear shortly.

What I found stupefying through my research, was the patronizing manner most people of my generation and older, speak to the youthful gaming audience. It’s like this stunned question repeated over and over again “so you can make money playing video games… ha!” or “Did you ever think wasting your youth on video games could work out for you like this?”

The implied nature of the questions is that even though you are my guest and I am interviewing you because you are important, I want you to know, i think you are not important.

Kind of made me mad. Offended. Ashamed.

Funny thing is, I asked today’s guest about it and he couldn’t have been more mature and gracious. Jake Lyon is a 23-year-old retired gamer who played for the Houston Outlaws of the  Overwatch League, and is now part of the Overwatch broadcast team as a caster.

Financial Review called him "the perfect poster-boy for the sport as it tries to dispel the prejudice that computer-gaming is a lonely pursuit of wastrels and slobs" and in July 2018, Lyons was selected as one of two Overwatch League players to attend a summit between the International Olympic Committee and the esports community.

He is an ambassador for eSports, a charismatic, mature, well-spoken passionate young man -- who is also our guest this week.

1: There is so much I want to get into regarding your background and how you got where you are – but before we jump into your story, I’d like to start out by discussing eSports in the current landscape.

We keep sharing the quote around our office that “there is opportunity in chaos” – and when I say this out loud, I think this exemplifies eSports.

Is esports ‘having a moment’ because it is perfectly suited to thrive in this current environment?

2: I saw that the annual competition for the game Counter-Strike: Global Offensive. – I won’t even try to pronounce the name for fear of showing my age – set a new viewership record in March making it the most-watched non-major esports tournament of all time.

Live crowds are a part of the esports experience, but unlike other sports, social distancing can be easily accomplished in eSports – do you believe you are reaching broader audiences right now who are starved for action?

3: How does eSports best capitalize on this momentum and carry it forward?

4: Help us out here – we focus on information on jobs in the sports industry and so often jobs in sports reflect those that are in the traditional business world – marketing, operations, sales, etc – but what about eSports – where do the opportunities exist to become a part of the eSports world?

5:  I tend to trust the sponsors, more than I trust the clichés – what I mean by that is, you hear people say all the time that gamers are just misfits playing video games in the basement all day, and they are social outcasts.

Then I see Louis Vuitton, Nike, Kia, and other big brands sponsoring events and being involved in the esports ecosystem – that tells me, the audience is a lot more than just kids in their basement.

So, in your view, what is the biggest misconception about the eSports world and gamers in general?

6: I saw a clip of you being interviewed on the Today Show, and I have to say, you did great, but I felt the host was very dismissive and almost patronizing. It feels like you have two worlds – fans who adore you and see you as a hero and want your autograph, and then a huge part of society that looks down upon the whole experience – how do you handle this?

7: Let’s talk about you –  if I’m not mistaken you started competitively gaming at 14, when did you realize you were good enough to be a professional, rather than just playing for fun?

8:  You clearly are personable and charismatic – fair or not, this runs counter than the perception of most gamers – do you feel any additional pressure to represent the eSports community to the mainstream?

9: You transitioned from gamer to caster in 2018 – as a gamer, you trained with your team 6 days a week for hours to be prepared professionally, most athletes I interview, when they retire, miss the team environment and being around their teammates most – how was the transition for you?

10: For a job performance perspective – were there any eye-opening moments as you went from being the guy making the moves to the guy describing and analyzing the moves?

11:  We often talk in the career development space about finding you passion for what you do – you have done that, you found what interests you and makes you happy and you’ve leaned into it – what advice do you have for people out there to help them find their passion and pursue it with everything they have?