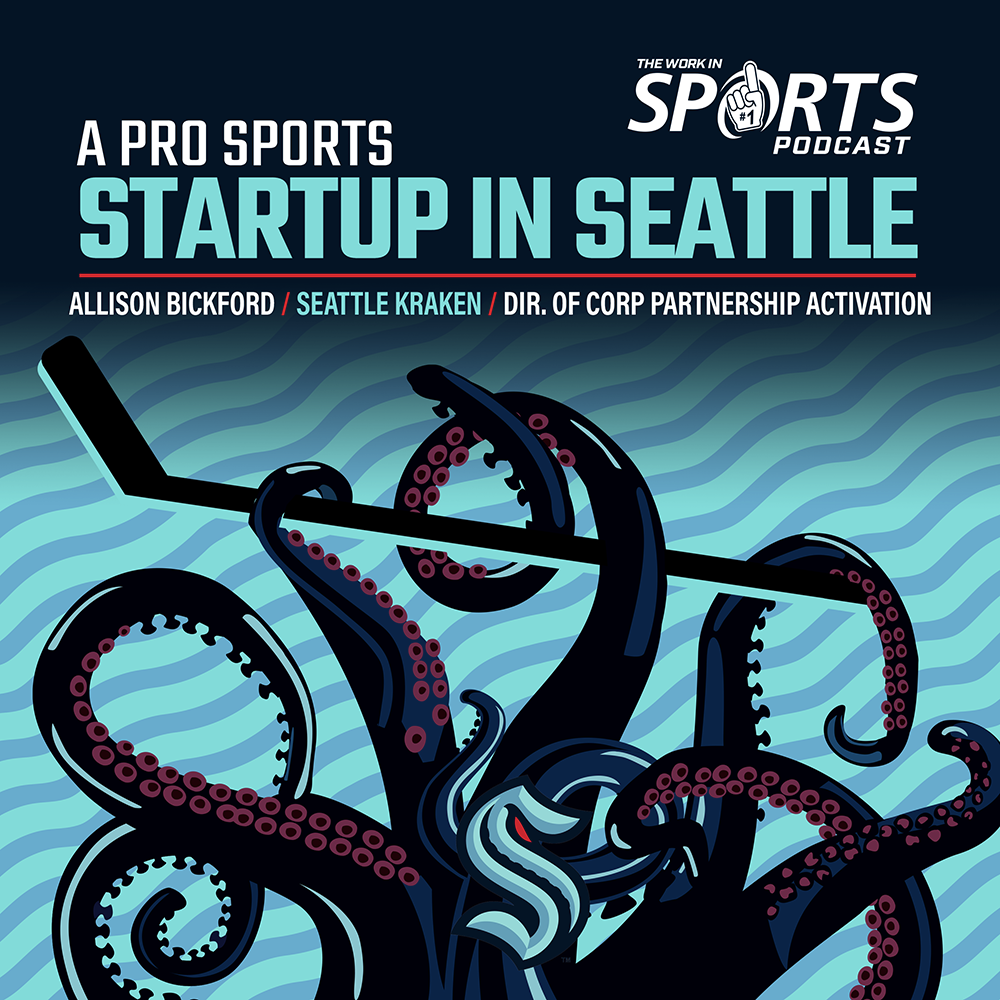 Hey Everybody I’m Brian Clapp, VP of Content and Engaged Learning at WorkinSports.com and this is the WorkInSports podcast…

The idea of a sports startup isn’t exactly new, there a fledgling agencies, marketing companies, tech companies all popping up throughout the year.

But what about a professional sports team that functions like a startup?

The Seattle Kraken -- and yes, I’ll be saying that name as often as possible over the next 45 minutes because I love it -- are the latest darling of the NHL and the entire Pacific Northwest.

But let’s digest that for a second.

December 2018, the NHL approves a proposal to grant Seattle an expansion NHL franchise

In any normal situation, it’s a mad dash to the start of the first season. There are stadium renovations to complete, staffs to hire, teams to draft - and that is barely scratching the surface of all the needs to be done.

It is the beginning of a franchise story. A startup business. Brand new, everyone figuring out through some levels of trial and error what will work and what doesn’t.

Now, for an NHL franchise like the Kraken, they are gathering the best, most experienced talent from around the world as part of their spunky little startup, so it is a little different than a new tech company like say last week’s guest Eric Stark began with Slate.

But, beginning something new is a huge challenge, and now layer in doing that during a pandemic.

Today’s guest Allison Bickford, Director of Corporate Partnership Activation has been with the Kraken since August 2019...but has yet to meet many if not most of her fellow co-workers outside of zoom. Is operating in a new city, without the ability to really go look around and see the area.

These are the challenges we deal with right now, and, at least in theory, make us stronger.

1: A few weeks back a fan of the show wrote in saying, “you need to have a guest on from the Seattle Kraken” …Allison Bickford, you are that guest! Welcome!

I lived in Seattle for 10 years and it was during the time the Sonics left town. Seattle is a great sports town, and the people were heartbroken then. Now, there is a palpable excitement people are thrilled to have hockey coming to the Northwest – what has the energy and excitement been like for you?

2: Let’s talk about your role – Director of Corporate Partnership Activation – sounds fancy, tell us a little more about what it means to be in your role, your primary focuses and what you love…

3: Would you consider Corporate Partnership Activation more of a sales type role? More customer service? Marketing? How do you identify yourself when you explain it to people outside of sports?

4: How did you land here, in this career path? I think so many in our audience struggle to identify their proper fit, or path, so how did you land in this area of focus in the sports industry?

5: You are working with a bevy of corporations as they come on as new partners and make sure they have a successful relationship with the team – how would you weigh the importance of relationship building and communication vs. coming up with new creative ideas, or broader strategies?

6: You are still months away from acquiring players and truly forming a team… at this stage and for your role, how important was it to get the name and brand out there AND have it be as cool as the Kraken?

7: When I first got into the sports broadcast media, I stopped being able to watch TV the same way. All I saw was edits and techniques and cuts and effects everywhere I looked. It drove my wife nuts. Has working in this world had the same effect on you? Are you always noticing activations and approaches in other markets?

8: Obviously the in-stadium lifestyle has changed a little over the last year. You have time, but none of us know what the fall will look like. How do conversations go with potential corporate partners? Are they excited about partnering with an exciting new local team, or hesitant because they aren’t sure how things are going to play out?

9: Has this pandemic forced some additional creativity in the partnership world? You don’t have the traditional in-stadium activations, have you been challenged to come up with new ways of developing value for yoru partners?

10: How much do you look at other NHL expansion teams, like Vegas, to see what worked and what didn’t? Clearly different markets, but are there learning opportunities?

11: What are the hidden skills needed for your role? For example, is it really important to be good at budgets, or project management? Are there certain aspects that you may not have realized as a student?

12: In normal times, your role would work cross functionally with many other departments… sales, business development, marketing, community -- everyone at the Kraken is pretty new, and we’re in this pandemic –how challenging has it been to work effectively?

13: Let’s finish up with this – you went to UNH, graduates with a degree in marketing and sports studies – what were you prepared for entering the sports industry, and what was a big surprise to you?