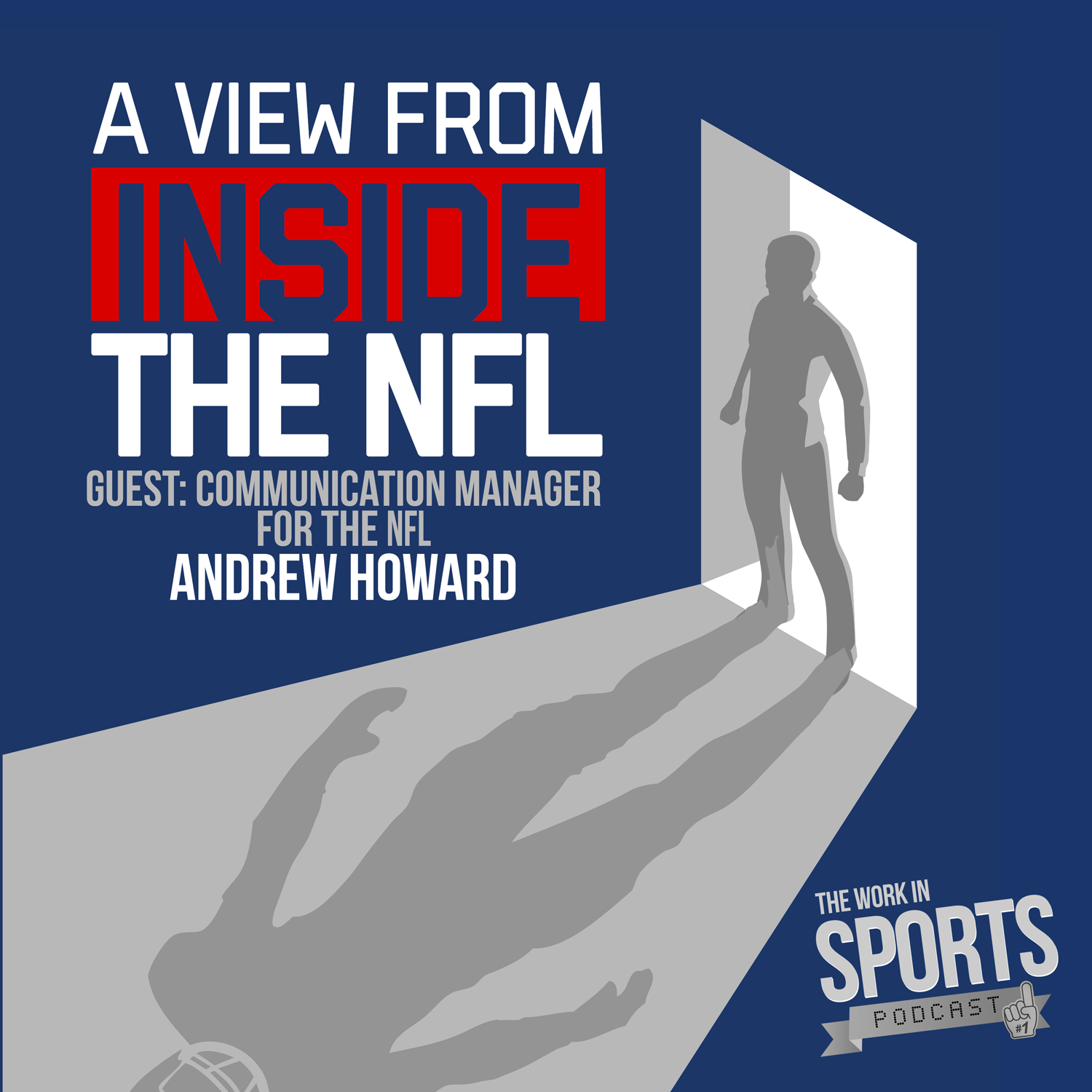 A View From Inside the NFL with Andrew Howard, NFL Communications Manager

Andrew Howard, Communications Manager for the NFL joins the podcast to discuss his role in the league, building relationships, networking and what it looks like behind the scenes of the NFL draft

Hi everybody I’m Brian Clapp Director of Content for WorkinSports.com and this is the Work in Sports podcast – I’ve always been impressed by calm people.

People who can be in the midst of an urgent situation but appear outwardly as if they are patiently awaiting a train to take them downtown for a casual lunch date. Their voice stays even, their facial expression exudes confidence and their palms are not allowed to sweat.

I am not this person. I’m overly excitable, especially in urgent situations.

That’s why I was in the TV industry, I love the urgency and the quick processing and mental gymnastics you have to go through during the day. But in these situations my voice changes, probably goes up an octave, my face looks intense, I’ve had people take pictures of me and laugh as I enter intense mode.

My speech increases in speed. I have to consciously meditate and think about my breathing in order to regain some sense of calm every day. I think to myself, release your muscles and it’s amazing my shoulders will drop like 2 inches.

I’m always tense and in ready to pounce mode. And then I get around someone really calm…and I’m in awe.

That’s how I felt in this interview with Andrew Howard Communication Manager for the NFL – here’s a guy with a huge laundry list of responsibilities.

Not just a lot of responsibilities….big responsibilities, and yet his demeanor is so in control and matter of fact. After this show go look at his linkedin profile and see all the things he is in charge of on a day to day basis – I just read his bio and start to have the excited shortness of breath. He’s go go go, but you’d never know it.

He’s measured, articulate, well-thought out and so incredibly impressive. I can’t wait for you all to listen in to this interview because there is so much to learn from Andrew Howard, Communication Manager for the NFL – so I’ll stop talking so fast… and get to Andrew

1: I’m always really curious about origination stories, you’re the communications manager for the NFL, a massive job with huge responsibilities and cool experiences many would dream of… but just a few years ago you were a student at UCLA studying History. When and why did you decide – I think I want to pursue a career in sports? 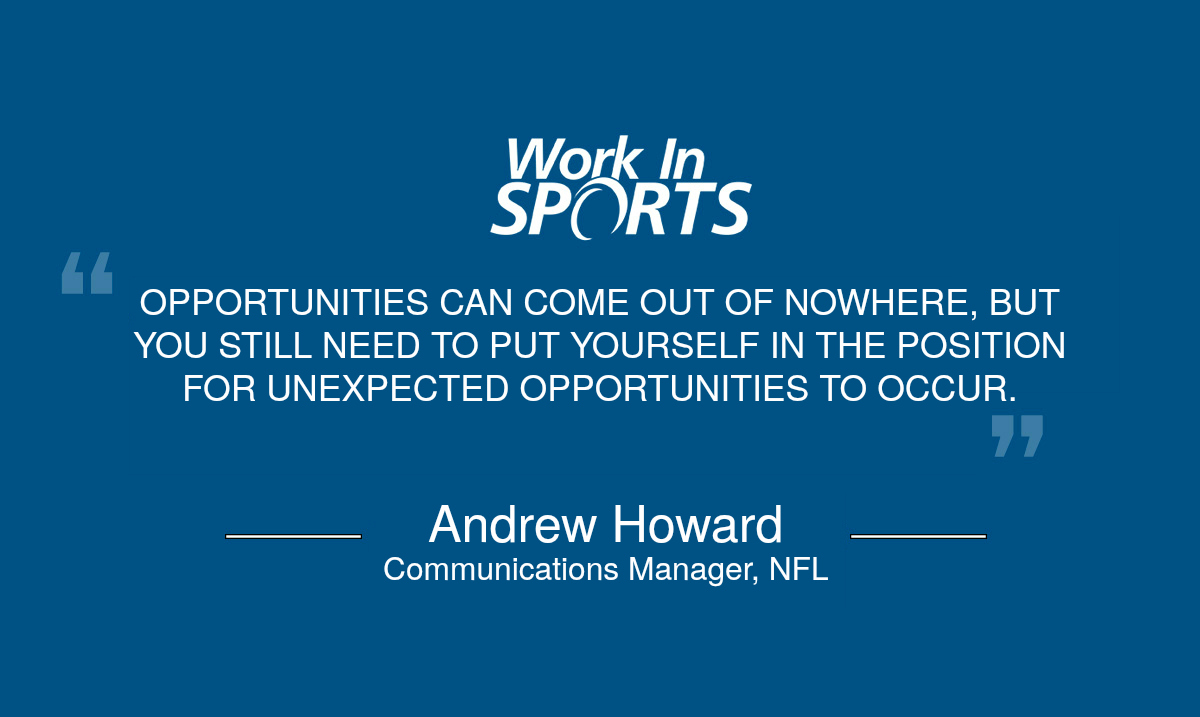 2: What was the draw of being on the publicity/communication side of the industry?

3: While in college you conducted internships with the San Jose Earthquakes and with the Golden State Warriors – how much did those experiences influence your career choices and direction moving forward?

4: You started with the NFL in 2010 as a Public Relations Coordinator…I’m guessing hundreds of people applied for that job, why do you think you got it? What was it that you did to   stand out for the right reasons?

5: I had a general manager once who had a background in sales, so he always leaned into the sales side of our business and let me have my way on the journalism/content side…. for you, NFL commissioner Roger Goodell has a background in PR, was it any more daunting to know the big boss may very well be keeping an eye on all of your work?

6: Take us through your current role as Communication Manager for the league – what are the main roles and responsibilities of your day to day?

7: It sounds like a great deal of your role relies not just on sharing 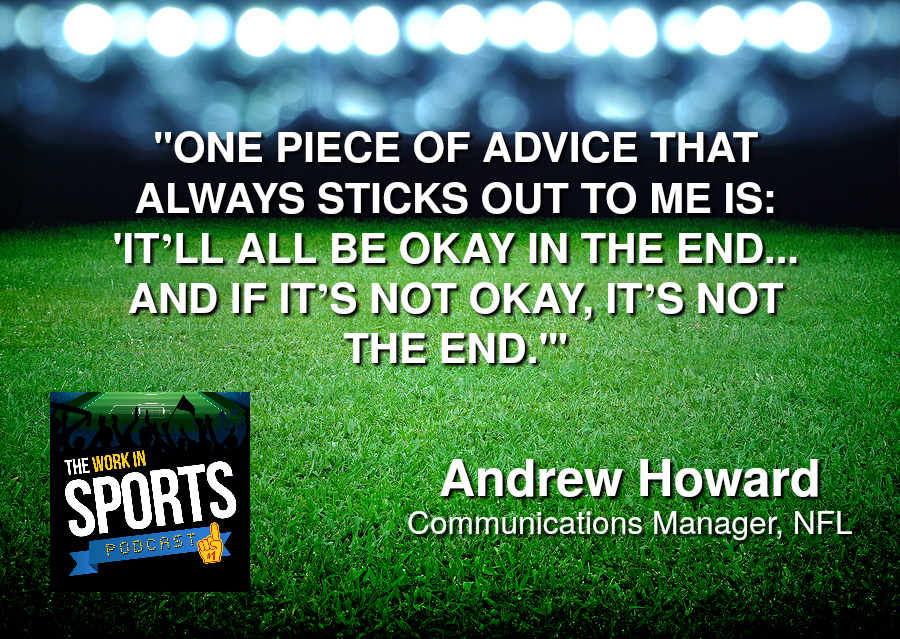 valuable league information, but also in creating buzz and promotion for various league events and NFL network media members throughout the year. With such a huge global brand like the NFL you probably don’t have to struggle much with establishing your brand, but everyone has challenges, what are some of the big challenges you face?

8: One of the biggest events of the NFL off-season is the Draft, I’m an addict I’ll admit it – during that event, and others like Thursday Night Football, the Super Bowl, Scouting combine – you are the on-site NFL Network PR representative – take us through that experience, what does day one of the NFL draft look like for you?

9: You’ve built relationships with the PR staffs of every NFL team, you have connections throughout the league and I’m guessing into other sports as well – so tell me, in your view what makes a good PR/strategic communication employee in sports?

10: So many in our audience are young people in college or recent graduates – as you look back at your college career and getting started in the sports industry, what’s the biggest piece of advice you can give someone in school who aspires to work in the industry like you someday soon? 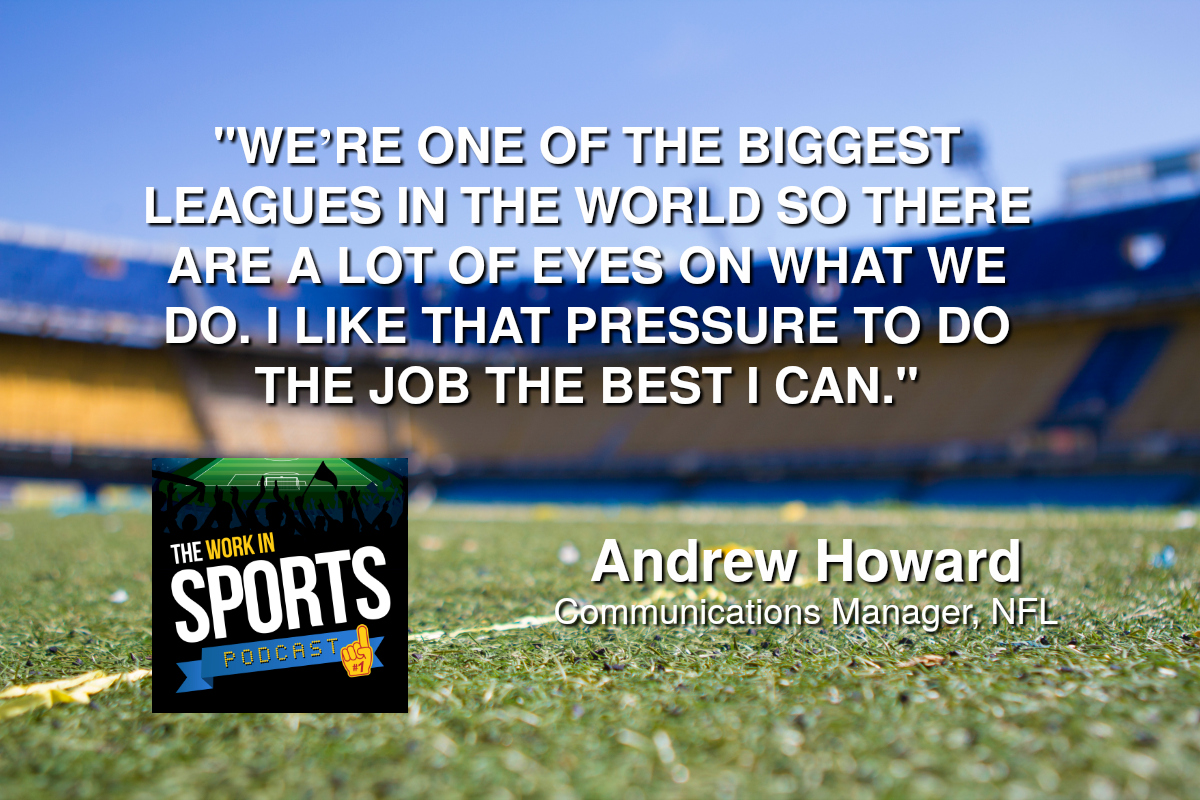 Thanks to Andrew Howard for coming on the show – that was an exciting conversation, I love how he was a history major but started working as a sports writer for the daily bruin and leveraged that experience into his high-level internships.

I also love how he was aggressive in reaching out to people and making contacts and networking.

He started building relationships early on and it’s paid off in his career big time. I will tell you, after this interview I asked Andrew – so do you have other connections in the NFL you think would make great guests…and he said sure, love to help, then sent me 12 incredible leads that I am currently reaching out to…so if you are an NFL fan, or just interested in the inner working of a major sports league, I suggest you subscribe to this here podcast, and tell at least 15 friends they should to. Now go to it!

By Brian Clapp | May 16, 2018 Sign In or Register to access all articles and insider tips for help in your job search.