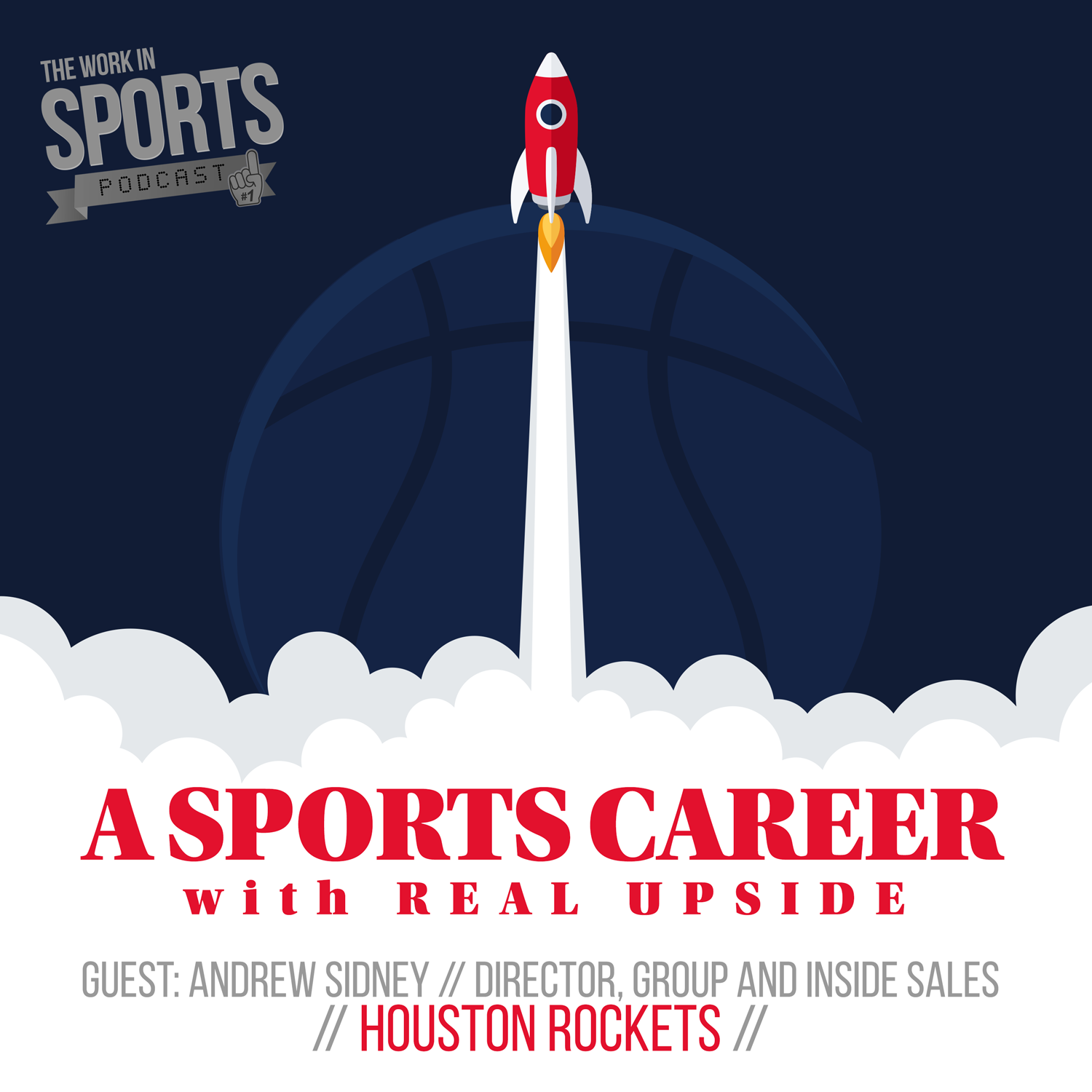 Andrew Sidney: Houston Rockets Director of Group and Inside Sales

Hi, everybody, I’m Brian Clapp Director of content for WorkinSports.com and this is the Work in Sports podcast.

A few weeks back on our little program I mentioned the idea of having a company first attitude towards job seeking. We all so often look for roles that fit our skill set, which makes sense, and is still a logical way to search, but I also espouse the benefits of looking at the companies that fit you, your personality and your career goals -- even better, when they have a reputation for training and developing staff.

Think of it this way -- your fit, early in your career, matters for your overall ceiling. Would David Carr, #1 draft pick of the expansion Houston Texans in the 2002 draft been a more successful player if he hadn’t gone to an expansion team and get 249 times over his first 4 years in the league?

Would Tom Brady have been as successful if he hadn’t landed under Bill Belichick and played in one system his entire career?

Would Devin Booker be a household name if he wasn’t putting up huge numbers for a terrible team in Phoenix?

Your fit matters. Athletes don’t have a choice, you do.

I know it’s idealistic when you are first starting out to think you can demand anything, or be selective in your roles. We are all guided by fear and when you are job searching you tend to go wherever someone is interested in you.

But, consider for a second, how important culture and role and development and training really are to your future.

I started out at CNN/Sports Illustrated and I look at that like I was getting my Masters from the experts in journalism. That was a perfect fit for me and set me up for every success I have had.

If I took another offer, at a small station in the midwest, I may have toiled there and never really took off in my career. I may never have developed a profile, or really enhanced my skills.

I remember starting at CNN and we had a few weeks of training before we did a damn thing. That was the best possible thing that could have happened to me. It made me comfortable, and it set me up to succeed.

I was watching Bar Rescue the other day, yeah I watch some bad TV I’m sure you do too, but anyway, they were talking about national food chains, your Chili’s and Applebee’s and the training they put all of their servers through. The steps of service I think they called it.

They take the effort to train their employees so their customers get an expected level of service and come back again and again.

What does this have to do with sports jobs?

Well, it’s simple, when you begin to isolate organizations you really want to work for, part of your research should be into their training and their culture. How much effort do they put into making their employees the best they can be?

Today’s guest Andrew Sidney, Houston Rockets Director of Group and Inside Sales, spent 5 years with the Frisco RoughRiders, double-A affiliate of the Texas Rangers. And as Andrew will tell you, they were dedicated to training staff, teaching them best practices, how to operate, and how to succeed. They set their staff up with apartments in the area, and clearly cared about their development.

That is what you are looking for in your first jobs and internships. An organization that sees you as more than a means to an end, an opportunity to solve their problems -- you want to be part of an organization that will help you develop and learn.

Take a note out of John Elway's playbook -- the top-rated player in the 1983 draft, Elway was going to be drafted by the woebegone Colts and basically say “no” Forcing a trade to the Broncos.

Had he not invested in himself and his future, spurning the Colts for the more established Broncos, who knows if we ever would have known and seen the superstar he became.

Value yourself, and your opportunities - just like today’s guest, Andrew Sidney Houston Rockets Director of Group and Inside Sales.

Questions for Andrew Sidney, Houston Rockets Director of Group and Inside Sales

1: You graduated from Ithaca College in 2010 with a BS in Sport Management and just 10 years into your career you are already in a high-level role with an NBA team -- looking back at when you were graduating from college and where you are now, how different is where you thought you’d be versus where you are?

2:  You were very aggressive interning while in college -- Long Island Lizards, Syracuse Crunch, Newark Bears -- what were some of the most helpful aspects interning in minor league sports provided you?

3: The Lizards are a pro lacrosse team, the Crunch an AHL hockey team and the Bears an Atlantic league baseball team -- what was your approach to identifying and choosing internships? Was it intentional to work in multiple sports?

4:  So after interning in operations, public relations and in the front office, your first real break comes from the Frisco RoughRiders in inside sales. A jump to Texas, so a big relocation, and a shift to sales. What was that process like for you?

5: Now you’re in an environment where you are making 100+ calls a day, selling season tickets, group tickets, mini plans -- did you take to this sales environment immediately or was it a work in progress?

6: What did you initially like most about being in sports sales?

7: Is it fair to say, if you are strong initially in sales roles, there is a high potential for quick career growth? You jumped to Sr. Corporate Marketing Manager after just 9 months in sales. Is this the norm if you perform?

8: 5 years total in Frisco with the RoughRiders -- you are definitely a sales success, you are managing people, huge expectations and more. What was the most important thing you learned about being successful in sports sales during this time period?

9: Big jump going from Minor League Baseball to the Houston Rockets -- was this always the goal for you, to end up working for a major pro team?

10: How different is it working in the minors vs. the pro’s -- is it the same techniques, just different expectations -- or is it a completely different ball game?

11: The Rockets are obviously a winning franchise, great fan base, superstars you can market -- that’s all great, but what are the big challenges you face on a day-to-day basis in your role?

12: You manage many staff members with the Rockets - both reps and managers -- what do you look for when hiring staff?

13: We’ll finish up with this - I’ve worked in many different environments, as have you, how important is it for you in a senior role to establish a work culture and how would you define the Rockets culture?

Thanks to Andrew for coming on the show -- great to talk with him and learn a ton more about thriving in the sales world and working in pro sports!

Hey it’s Brian, coming up the podcast today Andrew Sidney, Houston Rockets Director of Group and Inside Sales -- this is a great interview, but first we need to talk about the NEW Master’s in Global Sport offered by NYU as part of their School of Professional Studies, Preston Robert Tisch Institute for Global Sport.

I’ve been reading this ad for a while and I keep meaning to research a little more about Preston Robert Tisch, who the institute for global sport is named after -- here’s the quick and dirty - he was the chairman of the Loew’s corporation which owned movie theaters, and hotels was the Postmaster General of the USPS for two years and ..drum roll please, a 50% owner of the New York Giants along with Wellington Mara.

I always associated the Giants with the Mara family, had no idea Preston Robert Tisch was an equal owner!

It is offered online, with four one-week residencies—two in New York City and one each in Tokyo and Madrid.

Gain comprehensive knowledge of sports business on a global scale, which if you have been paying attention, you’d realize is the direction we are headed, so this is the type of advanced degree you need.

And the Work in Sports podcast is brought to you by WorkinSports.com -- the most comprehensive job board for the sports industry. 13,139 active jobs right now as I read this.

I’m just going to leave that right there. No need to expand upon it, our site is awesome, come check it out if you are serious about working in the sports industry.

By Brian Clapp | June 12, 2019 Sign In or Register to access all articles and insider tips for help in your job search.