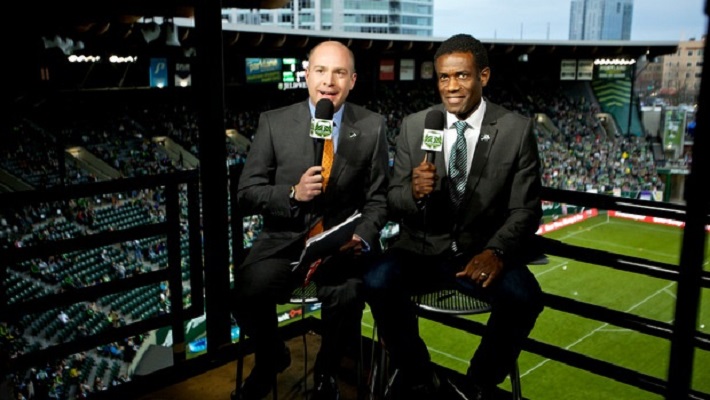 Becoming a Sports Broadcaster: Advice from a Professional

Part two of our three part series with John Strong, lead voice of the MLS on NBC. In part one, we discussed the early groundwork necessary to become a sports broadcaster, in part two we delve into actual on the job advice.

Many of the great sports broadcasters of our generation will tell you they grew up voicing games in the bleachers of their high school and practicing into a hairbrush in front of the mirror.

They knew what they wanted and they worked at their craft, they refined it, they critiqued it, they polished it.

Today there are technologies that outweigh the hairbrush and opportunities for exposure that far surpass recording your own voice into a tape recorder to playback for your family. Webcasts, podcasts, streaming video, iPads and countless distribution avenues - your words can be heard.

But therein lies the problem, with more avenues for exposure there are also more people that don’t take it as seriously.

“The thing that bugs me is when people don't take this job seriously, don't put in the work, because it's 'only' broadcasting on a small webcast or local station,” laments John Strong, lead voice of the MLS on NBC. “Which brings about one of those clichés that's very worthwhile: you never know who is listening.

“Whether the parent of a high school kid in your Friday night game, or a station manager looking for the next great voice, you may be trying out for your dream job and not even realize it. Even if you're doing a small regional game, and your cameras are all over the place, and there's not much info on the other team, it's still on you to prepare and act like this is the big time, and make sure the quality is there.”

For more tips and advice for becoming a sports broadcaster here’s more with John Strong:

As News Director, I always told young people to stop focusing so much on the perfect catchphrase and just get good at writing, presenting and asking questions – what do you think are the key elements young people should focus on if they want to work in play-by-play?

Strong: I think good play-by-play is pretty similar to the good reporting you were teaching: keep it simple.

Now, this is a very subjective art form, and there are a lot of very successful guys who do the opposite of this, but everything I've learned, and everything I'm trying to do right now, revolves around trying to keep it simple: don't go nuts with catchphrases, don't try to show off how much you know, don't make it about yourself; it's about the game.

Easier said than done, especially on TV, where I can just shut up for stretches and you're not missing anything. On radio, it's somewhat similar: work hard to paint that picture in my head, down and distance, time and score, who has the ball, what are they doing with it. But don't clutter that with too much other stuff or the important info will get lost.

It relates back to that "can you tell me a story" thing (from part one of this interview), the bottom line is always can you help me understand what's going on?

One thing I try to focus on is using the emotion in my voice to try to give you a sense that something important might be about to happen, to key in your attention first, before the thing actually happens. Think about the person who has the game on while working, or chatting, or on the "second screen experience," don't make them have to hit rewind on the DVR, or figure out from your analyst what happened.

To circle back to the beginning of this long-winded answer: it's never about you, the play-by-play guy. It's about the game. Start with that.

You started out doing play-by-play for various sports and even worked in sports talk radio, but then found your stride in soccer play by play– how important was it for you as a sports broadcaster to find a niche? And is that something you’d suggest to young folks or should they stay broad in the early career stages?

Strong: I'd argue to be as broad as possible at the start. You never know where that first chance may come from, and you never want to either fail miserably because you're out of your depth, or have to say no.

Most sports broadcasting jobs are multsport anyway: college jobs are football-basketball-maybe baseball, local radio sports jobs the same. There are lots of soccer opportunities sprouting up, and just as they told us when I was in school that it wouldn't hurt to know some Arabic if you wanted to do news, I'd say it wouldn't hurt to know soccer and lacrosse if you want to do sports.

I loved all sports, but soccer was my passion. It just happened to work out that there was far less competition for spots in soccer, and that's something for a young person to think about: there are tens of thousands of other guys who'd die to do NFL games. Probably far fewer in other sports.

Now, if that's your one true passion, go after it with everything you have. But consider that your chances of making "the big time" might be better if, at the least, you can do multiple things. And that's even given the counterargument risk that you're perhaps not an expert in any one thing--the chance for specialization will, hopefully come later, as it did for me: it was 8 years after I "started" in high school before I was soccer only in my play-by-play, and another two years before soccer broadcasting was truly all that I was doing.

You don’t have to name names…but do you have any pet peeves, or techniques that bother you, when you watch/listen to other broadcasters?

Strong: Ha ha ha, yes, many. But that doesn't absolve me from responsibility for either A) doing these things from time to time, or B) doing things that others would be peeved about.

With new sports networks popping up constantly, whether it’s by league, by team, by region or by conference and the digital world being a entire new frontier…are we in the golden era of sports broadcasting?

Strong: In some ways, yes: there are more opportunities out there for people, especially young people, to do the job they love. However, with quantity comes questions about quality. Yes, there's a lot of sports on TV, but...a lot of it could be better.

Sometimes that's just a matter of resources/budgets/etc. But sometimes it's about the quality of the work being put out there. Just because you're not at a network level doesn't mean you shouldn't have the same work ethic, and aspire to the same quality, as those guys. That's what I always tried to do with even my really small time webcasts of Oregon softball games: make it sound as big time as possible.

At the least, it's good practice for when you hit the big time.

By Brian Clapp | November 25, 2013 Sign In or Register to access all articles and insider tips for help in your job search.