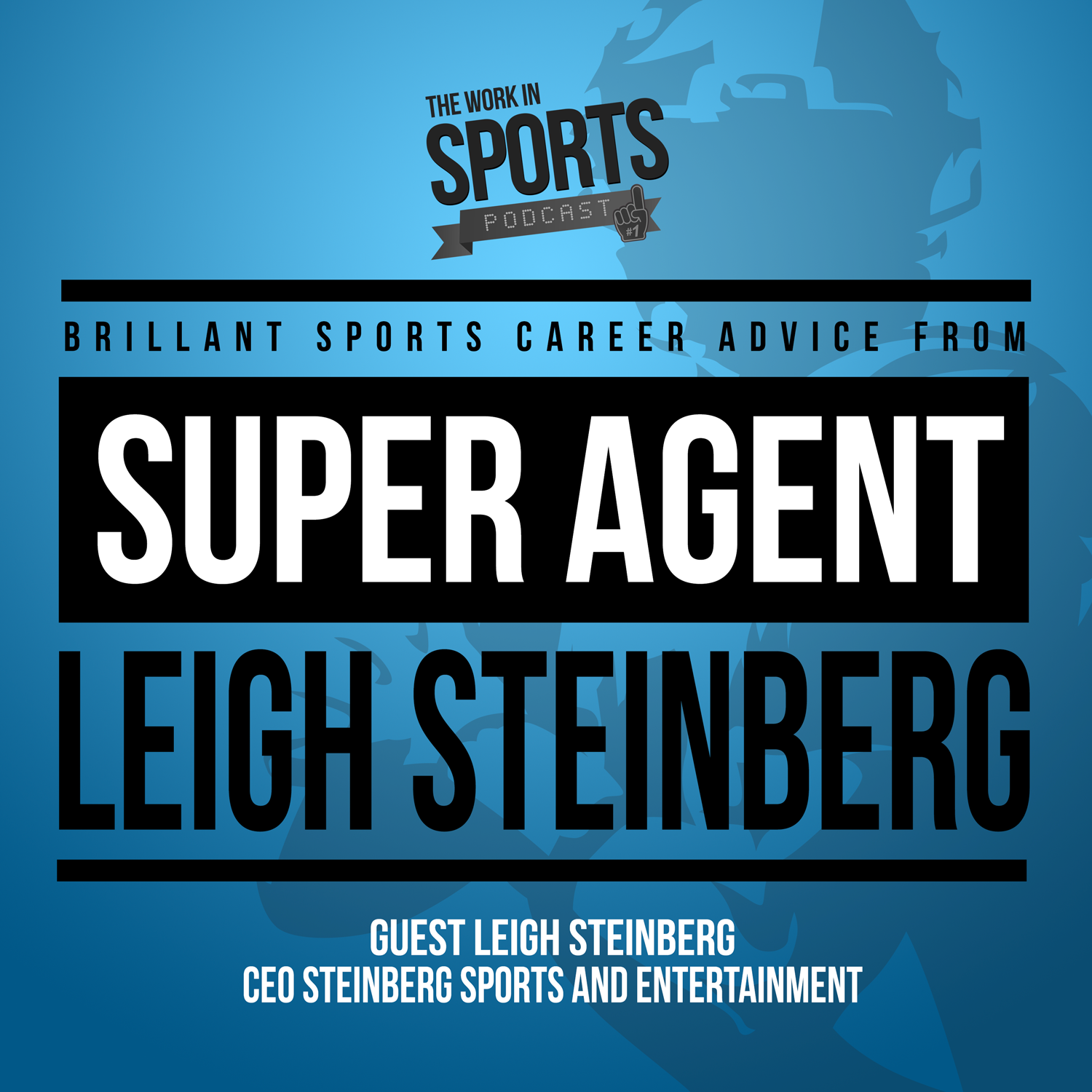 Super agent Leigh Steinberg joins the podcast to talk about leadership, what motivates him, climbing back up the hill after crashing, the patterns of success and a whole lot more.

We also discuss his new online course -- The Leigh Steinberg Sports Business Certificate - follow the link for more information on this robust course that will take you deep inside the world of sports business!

It's the most cutting edge education program on the business of sports to ever be produced. This course will teach you the ins and outs of the sports industry, how to land the job you want, and how to create a successful legacy working in sports.

Hi everybody, I’m Brian Clapp Director of Content for WorkinSports.com and this is the Work in Sports podcast!

My wife has this saying – she probably stole it from someone else, I’m not trying to say she’s Socrates or anything – but it’s always in my head.

She says “there is power in vulnerability”

Think about that for a second. We are all so preconditioned to toughness, both physically and mentally, that we don’t often allow ourselves to be really honest with ourselves and others.

But you know what happens when we face up to our true feelings and express them? You find out the world is actually more accepting and welcoming than you had ever imagined.

By facing up to and admitting your fears, needs, wants and pains… you actually gain strength. Because burying emotions doesn’t make them go away, it just lets them fester.

Gimme a second… I want to figure out who said that quote because I’m giving my wife too much credit… “there is power in vulnerability”…ok, google has the answer it is noted author Brene Brown.

She also adds – “vulnerability is the birthplace of innovation, creativity and change”

Which fits into why this particular topic is so relevant today.

You all know me for my public persona, rock star podcast host and helpful fella on social media. But I’m as nervous and often neurotic as they come, I’m fragile, sometimes broken and easily emotionally intimidated. In some ways I’m a fraud, since in the early days of my career I acted like a know it all because I was afraid to admit I didn’t know anything.

The old fake it til you make it BS. I took that catchphrase pretty literally.

This isn’t meant to martyr myself. This is meant to show honesty, so that you can open up the same in your own life.

Never before has this fear and nervousness been more evident than this past week. I found out Leigh Steinberg was coming on our podcast. His people had ignored my request for months, but then one day it happened they said yes and here we are.

The truth is, I started to panic. I wasn’t consumed with joy and a sense of accomplishment. I was paralyzed…like when you are sitting in the waiting room for a job interview and all you can think of is what will go wrong in the near future.

You picture nothing but failure.

What if he hates my questions? what if he is bored with me? What if he doesn’t answer his phone? What if I stumble, or forget, or stutter, or blather on?

I’m 43 years old. Over my years I’ve learned how to harness this fear into focus, but the earlier version of me couldn’t. I failed. A Lot. I made an ass of myself A LOT because the nervousness and fear consumed me. A unwavering need to be liked and respected prevented me from being honest and doing simple things like asking for help.

I went on to our private facebook group and said as much – I told the community 2 hours til my interview with leigh Steinberg and I’m not gonna lie I’m a little nervous.

You know what happened? Outpouring of support. And you know what comes from support…strength.

I knew I had worked hard on my questions, I knew I could drag unique conversations and angles out of him…and the support of my peers, and of my friends in our community… pushed all doubts to the side, and allowed me to control the interview.

I stopped giving the aura of Leigh Steinberg all of my power and said to myself, he’s just a dude, and you’ve interviewed dudes all your life.

When I made the call to leigh it took about 20 seconds to know we were going to be bros. He’s engaging, honest and raw. He’s done interviews like mine 1,000 times but he made me feel like the only person that mattered in that moment. He was present and accounted for, answering all of my questions with gusto.

I think this interview will serve you all well, as both a reminder you don’t have to fear your fears, you can embrace nervousness… and you can really, really learn a lot of cool stuff when you get a chance to talk to a guy who has been in the sports industry for over 40 years had movies made about him and represented Hall of famers like Troy Aikman, Steve Young and Bruce Smith.

But here’s what’s really amazing – through all of that success, he has also felt a lot of heartache, losing everything to alcoholism and family issues – only to right the ship and rebuild. He hasn’t strolled through life, he’s battled…just like everyone else.

So here it is, Leigh Steinberg – the first super agent, and the CEO of Steinberg Sports and Entertainment.

1: You’ve spoken many times about the lessons your father instilled in you to ‘treasure relationships and try to make a meaningful difference’ – of course those are huge principles in the greater game of life, but as it relates to the sports industry and agency, is that focus on relationships rather than transactions, the most important pillar of them all?

2: How big of a role does competitiveness play in sports careers? You’re always out there competing for clients, but it isn’t just in agency, it’s in sales, its in operations, promotions …is an innate competitiveness a vital skill for success in sports?

3: What about personal routine – you hear people sharing their process all the time, from Admiral McRaven imploring people to start by making their bed, to others who meditate, and others who exercise in the early hours – what about you, are you a creature of habit and if so do you have a routine?hhhhhhh

4: I wrote an article a few years back about the pitfalls of working in sports – the late nights, working holidays, being in a high-profile career – it can lead you down a treacherous path. You battled alcoholism and hit near the bottom around a decade ago. But you’ve conquered so much and risen back to the top of your career which is worth celebrating.  I’ve known many people who didn’t make their way past their demons like you did – what advice do you have for people that work in the sports industry to keep themselves above water and grounded?

5: Over your 40 years you’ve been around many successful people inside and outside of sports, but you’ve also been around people who haven’t made it. What are the patterns? Outside of natural talent, what makes one person succeed while others fail?

6: Before you were “Leigh Steinberg” the man synonymous with sports agency, you were a political science undergrad and then a Berkley Law grad… now, I imagine you can walk into a room with parents and college age athletes and have immediate gravitas, but then you didn’t have that cache -- how did you land your first clients without the massive success story and proof of concept to share?

6a: is that still the same method to get clients or have things changed dramatically in regards to recruiting methods in recent decades?

Do you get nervous? I’ll admit I’’ve done hundreds of interviews over my career and I still get nervous before each one… especially this one, what about you do you get nervous when you are entering a meeting with a client you really want to sign, or with a team in a contentious negotiation?

6: What about the qualities that make for a successful agent in today’s world -- If you were hiring a team of agents to work under you, what are the qualities you would look for?

7: What about the non-agent careers at a sports agency… you have a large firm, but not everyone who works at Steinberg Sports is an agent, what types of roles are there for people interested in Athlete management, but maybe not being an agent themselves – what does your team look like?

8: When you look at your roster of players you’ve represented - hall of famers, 1st overall picks – what makes you most proud about your years in this industry?

9:  Over 40 years in the industry and you’ve seen, I’d guess, nearly everything. You’ve recently launched a video course titled  ” How to start your career in sports business without any experience!” where you focus in on networking, personal branding, interning and finding your dream job…

Without sounding flip or snarky… why? Why make this move?

10: What can someone expect if they commit to your taking your video series?

11: In interviewing hundreds of sports executives I believe most of them don’t have faith that traditional colleges do a good job preparing their students for the reality of the sports world – do you find this to be true and if so, what are the core fundamentals today’s graduates are lacking?

By Brian Clapp | August 29, 2018 Sign In or Register to access all articles and insider tips for help in your job search.