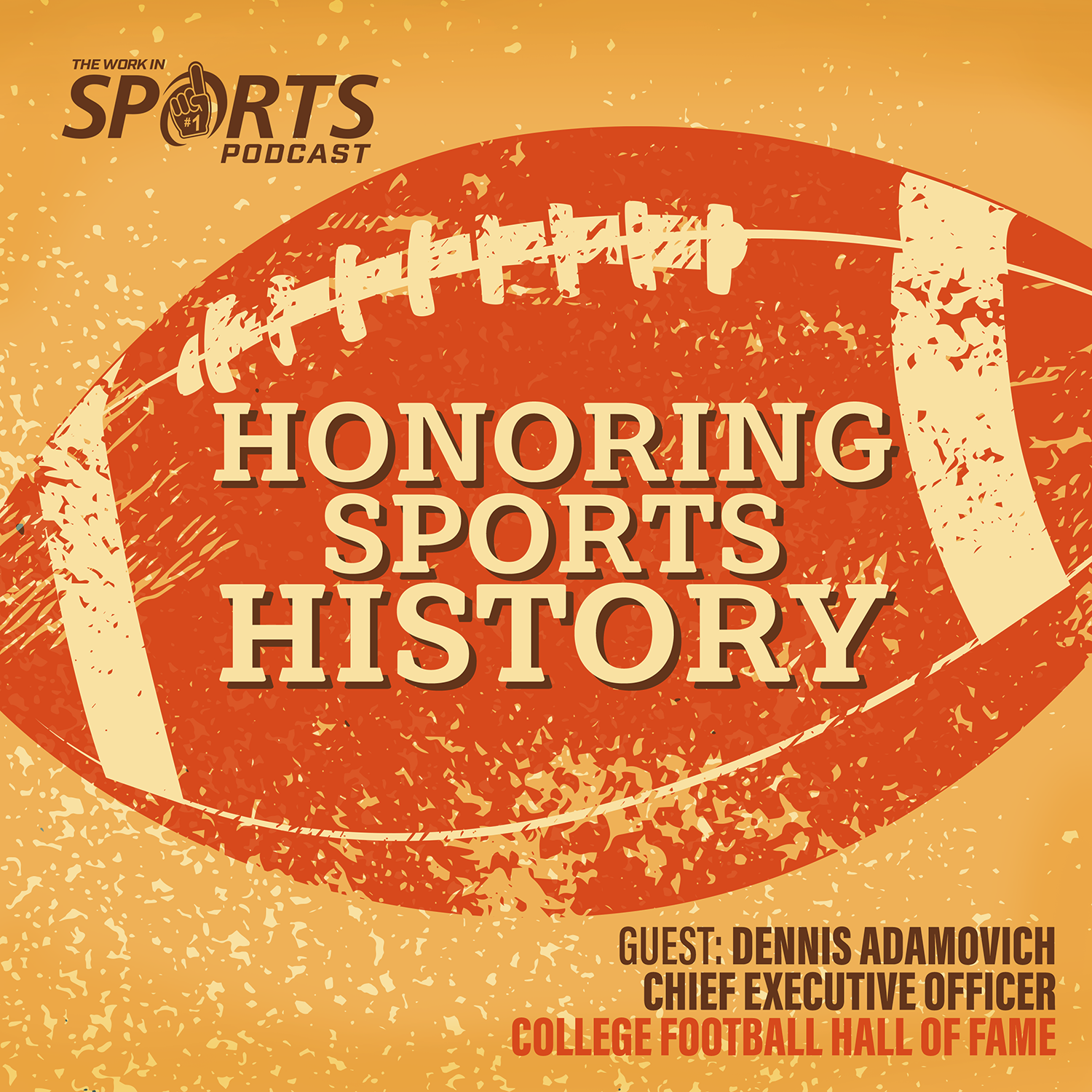 Dennis Adamovich, CEO of the College Football Hall of Fame joins host Brian Clapp to discuss leaders that inspire him, the steps to becoming a CEO, negotiating techniques and much more.

Hey everybody, I'm Brian Clapp VP of Content and Engaged Learning for WorkInSports.com and this is the Work In Sports podcast.

We all have big dreams for the sports industry right?

I mean none of us grew up thinking I dream someday of being a mid-level manager, working nights, weekends and holidays with the hopes of eventually moving out of my parent's house.

No of course not, we all dream bigger than that. We dream of being a sports agent, leading an organization, anchoring sports center, coaching LeBron's kid, being a CEO, running an NFL draft.

These are big goals, big dreams.

But, you have to leave them in the background for a bit. Don’t ignore them, don’t forget that they are what guide you -- they have a huge role in your life and success - but for right now, you have to focus on the steps.

You see no one starts out at the big goal, they build, systematically to reach the dream.

Anchors on SportsCenter start out as a sideline reporter for the rodeo in Pocatello Idaho. They learn their craft, they make mistakes, they build their style and point of view, the refine their writing and communication skills, they understand the entire production and staffing and budgets.

And then they graduate to Champaign Illinois. Maybe 5 years later ESPN notices them, and they end up doing sideline for a Wednesday night Toledo vs. Akron college football game.

I’ll task every one of you listening with this chore -- take your big dream, and break it down into steps.

If you want to be a sports agent -- what are the steps you need to get there?

Focus on the steps.

He spent 8 years at a major brand, Coca Cola, he worked up within this global brand, to a point where he had 110 staff members he was responsible for. He oversaw the sports marketing and sponsorship efforts for the brand, he managed over $150 million in brand funds.

And that was just the first 8 years of his career. Over the next 15 years, he was SVP of Turner Broadcasting.

He took the steps, he mastered the business of sports, he managed people and budgets, he landed sponsorship deals and much much more.

These were his steps.

Now, after making all these moves, and proving himself, becoming a CEO was a natural extension of all he had done to that point in his career.

Dennis Adamovich has helped turn the College Football Hall of Fame into a jewel of downtown Atlanta -- I��ve been twice now, and it’s one of the must-see stops when you visit Atlanta.

Let’s start with this – at what point did you decide on sports for a career path, and why?

2: I want to get into the details of your various leadership positions - you’ve been an executive at Coca-Cola, Turner Broadcasting and now CEO of the CFB Hall of Fame - but I’m curious about your mentality as much as I am about the day-to-day roles. What would you consider the most important traits or skills you developed which have allowed you to thrive in executive leadership?

3: Would you consider yourself a competitive person?

4: I had a boss once that told me the most important part of my job wasn’t the day to day journalism, it was hiring a strong staff around me. What has been your approach to hiring and developing your team?

5: As CEO you are the leader of the organization – what makes a good leader? And how did you learn how to become one?

6:  Let’s go back to your first year as CEO of the Chick Fil A CFB Hall of Fame – you were with Turner Broadcasting for 15 years, I’m sure you were very comfortable with the way that organization operated and your function within it. When you shifted to the CFB Hall of Fame -- we’re there any eye-opening moments that first year?

7: How do you view your role and priorities as CEO?

8: For the CFB Hall of Fame, there is likely no bigger deal than landing a presenting sponsor like Chik-Fil-A – how important was it for you to land this deal?

9: Big deals like this happen through negotiation – what would you say are the essential components of fruitful negotiation?

10: I have been to the College Football Hall of Fame and it is a remarkable place – obviously it is a testament to the history of college football, but it is also a premier space for private events. During your tenure you’ve made a concerted effort to land big events  like SEC Media Days, the Sports Illustrated Super Bowl party, ESPN’s College Football Awards – why was this an important evolution for the Hall?

11: We’ll finish up with this – As you look back on your highly successful career, what specific advice would you share with young people making their way in the industry?

The Work in Sports podcast is brought to you by, Georgetown University!

Get this, if you’ve been struggling to find time to get your Masters -- you know it’s vital to your career growth - but just don’t have the time - Georgetown offers a part-time Master's in Sports Industry Management that offers flexible options to take classes online, on campus, or through a combination of both.

But, beyond just being flexible its also an incredible program that prepares you to excel in the global sports industry. You'll leave the program with the communication, business, and leadership strategies that position you for success.

To learn more about the program, visit scs.georgetown.edu/workinsports

Hey seriously -- get more info, and use the link I just gave you.

By Brian Clapp | February 26, 2020 Sign In or Register to access all articles and insider tips for help in your job search.