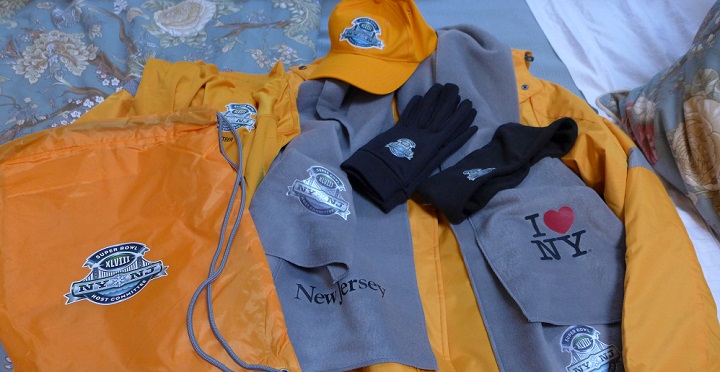 Does Volunteering at Sporting Events Help My Career?

If you were in New York City or New Jersey during any part of Super Bowl week, you probably saw numerous people in bright yellow jackets with name badges around their neck. You may have asked one of them how to get to your destination or about how you could take part in New York City’s Super Bowl Boulevard festivities.

Or maybe you just thought, “How could I do something like this in the future?”

Well, I am here to help. It turns out I was one of the volunteers in the Big Apple while the festivities were in full swing. This two-part entry will cover why I chose to volunteer and what my position entailed.

I first became inspired to volunteer at sporting events when reading a career advice blog by former ESPN sports business reporter Kristi Dosh. She has said many times that people wanting to work in sports need to be willing to start at the bottom and work for free. Furthermore, she also featured guest posts from people who have furthered their sports careers by volunteering.

While you should not forgo internships if you are truly serious about the industry, volunteering is another way to add something to your resume and could give you an edge over the many applications on a hiring manager’s desk.

Being that adding an internship to my plate seems near impossible with a full-time job, I jumped at the chance to gain experience when the New York/New Jersey host committee was looking for volunteers. This followed Kristi’s advice of being willing to work for free and start at the bottom. I knew my assignment would not be glamorous and that one of the only perks I got would be keeping my uniform.

However, I had my own reasons for doing this. I work from home as a quality editor for Bleacher Report, so I had a desire to gain more public-facing experience.

Being a Super Bowl volunteer would put me in one of the busiest cities in the world and allow me to interact with visitors and others on the host committee. Furthermore, as someone who has traditionally wanted to work for a hockey team, I wanted to get out of my comfort zone and work with another sport that I wasn’t as familiar with.

While an internship or entry-level job may draw hundreds of applicants and express the desire for someone with a certain amount experience, getting your foot in the door as a volunteer can be easier. You had to be at least 18 years old and willing to pass a background check, and then you had to commit to a minimum of two shifts during Super Bowl week.

Of course, a willingness to work with people and display a friendly, welcoming attitude was also a necessity.

After I initially filled out the registration form in the early fall, I had to agree to a background check. The initial registration called for information such as your hometown, contact information and any special expertise you had that could benefit visitors. For example, a native New Yorker familiar with the subway system would get a designation on their badge that said “Subway Expertise.” Since the subway can be a bit daunting for first-time visitors to the area, these people could help tourists read maps or explain how to purchase a MetroCard.

Volunteers then chose their positions in October.

Most of the available roles were greeters, which included guiding people around the major train stations and airports in the New York/New Jersey area and working in tourist hubs in NYC itself. Since I am not a native New Yorker, and I understand how it feels to be a tourist, I chose to work at 42nd St. near Bryant Park for my Friday shift and at Rockefeller Center for my Saturday shift.

These were areas I have visited several times and I felt confident that I knew enough about them to help others get around.

Then, it was time to schedule orientation. All volunteers had to pick a day to attend a presentation that was about two hours long and put on by host committee staff. Most of the dates were in November and had a specific amount of slots available.

Turning Into a “SUPER” Volunteer

My orientation was on a Thursday at Baruch College in Manhattan.

Upon checking in, we had our pictures taken for our ID badges and had to wait to get in the room. We received complimentary pens and bottles of water, and we started out introducing ourselves to the people sitting next to us.

The presentation explained our role as volunteers, which included being welcoming to visitors at all times and showing that you were there to be helpful. The motto was “More SUPER With You,” which showed that volunteers would be as much a part of Super Bowl week as paid employees and the teams participating.

We got a list of don’ts, such as not using our cell phones for personal use or chewing gum during our shifts. To further illustrate these points, we watched a video with actors both correctly and incorrectly helping tourists get around.

We also had the uniform explained to us, which was a jacket with an inner shell, a baseball hat, a headband, scarf and gloves. The shell, which came out of the jacket, was more meant for people working indoors at hotels and airports, and those of us working outside would be bundled up in the coat and scarf. Our volunteer book said the host committee was hoping to project a standard image for all volunteers and that black or navy pants should be worn, but dark denim would also be acceptable.

Overall, the orientation was a little under two hours, and I left excited for my role.

However, I did learn more that day about the sacrifices spots professionals make. In order to attend this orientation, I had to take a day off my job to travel to the city and back home at the end of the day. I would have to do the same again in January to come in for the weekend and would miss out on some free time about a week and a half before that when I came in on a Saturday to pick up my volunteer uniform.

Part 2 will post next week, Alison discussed more about the event, networking and the overall benefits of the experience.

By Brian Clapp | April 02, 2014 Sign In or Register to access all articles and insider tips for help in your job search.