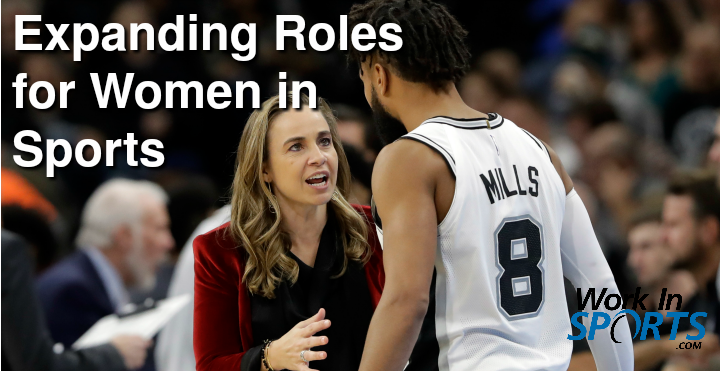 Expanding Roles for Women in Sports

Similar to roles in other male-dominated fields, women have had difficulty obtaining jobs in sports.

The sports industry has been slow to accept women in a variety of positions and even slower to offer them respect.

However, women are increasingly accepted as important contributors to the sports industry and the opportunities available to them continue to grow. More positions in sports will open as more women seek these jobs out.

Now, women can pursue a variety of careers and make an impact in the world of sports, whatever their passion may be.

One of the most difficult fields for women to enter is sports journalism.

Women have worked tirelessly for decades to be taken seriously as sports reporters in all mediums, from print to online platforms. The women who do work in sports journalism face sexism and sexual harassment on a daily basis. But they continue to fight for their careers and pave the way, not only for themselves but other women as well.

There are more options than ever before when pursuing a career in sports journalism.

Social media and online platforms have provided new options to journalists who aren’t drawn to print or broadcasting. In addition, some organizations are making an active effort to hire more minorities.

ESPN, in particular, has been praised for leading the way in minority hiring in the sports industry. As employers prioritize inclusivity and diversity, there will be an increasing number of opportunities for women to get involved in sports journalism.

While many people may not think that art and sports pair well together, women who love art can combine that interest with their love of sports by seeking work in interior or athletic clothing design.

The sports world is a canvas waiting to be painted upon, and with a creative eye, there’s no limit to what can be achieved. Updated locker rooms or cutting-edge uniform designs are a great way to make a mark in the sports world as a woman.

Sportswear design is a competitive field to enter, regardless of gender. Determination, passion, and a degree in art or fashion will go a long way when looking for a position as a designer.

In the last decade, female coaches have been making a name for themselves.

It took 40 years after Title IX passed in 1972 to see women enter coaching positions on professional sports teams. In the summer of 2014, Becky Hammon was the first woman to be a full-time assistant coach in the NBA when she was hired by the San Antonio Spurs.

The Sacramento Kings hired Nancy Lieberman shortly after. The same month, the Arizona Cardinals hired Jen Welter, making her the first female coach in the NFL.

These women are trailblazers in this field and are causing a huge shift in the professional sports world.

They are incredibly qualified for these positions and have opened the door for other women who want to become coaches. Up until a few years ago, this may not have been a possibility for women and young girls with a passion for sports.

Coaching opportunities at the professional level may not be abundant, but the fact that they are being hired at all shows that women can break into new roles in sports.

Despite the numerous obstacles they’ve faced, women have been athletes for centuries.

Married women weren’t allowed to even watch the Olympics in Ancient Greece. In the Victorian Era, women were believed to be too frail to engage in intense physical activity.

From that point, it took decades for women to be able to play sports competitively. But today, some of the most celebrated athletes are women. From tennis to skiing and everything in between, female athletes are championing a new age of women’s contributions to sports.

Unfortunately, they still face many barriers to earning the same amount of respect, praise, and money as male athletes.

According to Adelphi University, the wage gap between female and male athletes in elite sports is much wider than the average income gap. Female basketball players earn, on average, 1.6 percent of the male salary. And even though the U.S. female team is the most successful soccer team in the world, its members only make 14.4 percent of what the male team makes.

The wage gap, among other issues, indicates that though women’s roles in sports have come a long way, there’s still a long way to go. The sports industry has been slow to value women’s contributions and slower still to include them in traditionally male roles.

Many women in sports, whether they’re a coach or sports journalist, are not treated as respectfully as their male counterparts.

Despite the difficulties, women have persevered and carved out their own spaces in sports. And as they blaze new trails, they clear the path for other women to follow them.

If you are a woman and want to work in the sports industry, do it! Generations of girls will thank you as sports continue to expand roles for women.

By Brooke Faulkner | May 01, 2018 Sign In or Register to access all articles and insider tips for help in your job search.