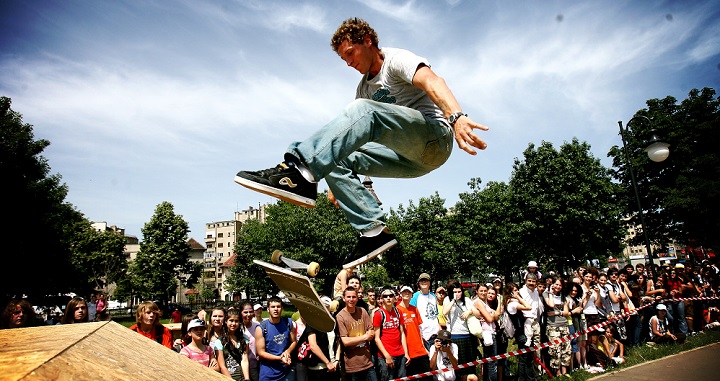 If you asked people why they decided to get into sky diving, motocross racing, surfing, skateboarding or any other high action sports, they would probably tell you they enjoy the thrill of a good adrenaline rush combined with feeling the wind flying across their faces.

What these same people might not admit, at least not at first, is that they also get a huge kick out of capturing their athletic adventures on film and posting these videos and photos for their friends and family to see.

From the dirt bike rider who can’t wait to take some selfies while wearing his cool new motocross duds from the motocross store, to sky divers who invest in fancy helmet cams to capture their free fall back to earth, action sports are also about documenting all of the thrills, chills and spills and sharing them with others.

This love of sharing action sport adventures has helped to inspire the development of some pretty impressive technology. For example, consider the following electronic devices and gadgets:

Remember when cell phones used to just make calls? Nowadays, people are just as likely to choose their mobile phone based on how many pixels the camera has, as for its ability to reach their Aunt Betty in Montana. While skateboarders used to have to rely on word of mouth and maybe a grainy Polaroid shot or two of their amazing 360 degree spin in mid-air, people are now demanding the ability to capture their athletic prowess in a much more quality way — often through high-tech cameras on their mobile phones.

This technology is continuing to improve all of the time. As The Next Web notes, Stupeflix’s Steady for the iPhone is a brand new app that allows people to shoot super steady video even when walking, running or riding a bike. Available from the iTunes store, this new and innovative app means you can ask your buddy to run or bike alongside you as your perfect your latest skateboarding moves, expertly capturing stable video footage of your awesomeness.

For people who prefer to get their action sports shots with a regular hand-held camera, it’s important to find one that has an extremely fast shutter speed. As Z Gadgets Review notes, newer cameras now feature 1/1000 shutter speed, which is essential to avoid blurry shots of motocross riders whizzing by. For example, the Nikon D5100 DSLR is a far cry from the point and shoot cameras of the past. With its Multi-CAM 1000 autofocus system and light metering that even newbie photographers can use with ease, this camera will produce the sharp photos and expertly lit shots that action sports athletes are looking for.

Nowadays, sky divers are looking for much more than a safe landing — they want to capture every second of the mid-air adrenaline rush on film. This desire has led to the development of the helmet camera which, as the name implies, can be mounted directly on the skydiver’s protective head gear. As Dropzone notes, some helmets allow for a top mounted camera while others have the cameras on the side. Each helmet has its share of pros and cons, but in general, many skydiving aficionados prefer the side mount camera helmets because of the way the air moves around the helmet and camera.

Action sports athletes who want to get second-by-second footage of their adventures can also purchase a curved extension mount that was developed to help make self-filming as easy as possible. For example, Jazooli offers a helmet extension arm that is ideal for all GoPro cameras. The arm can also be adjusted in order to get the best angle possible.

To get the coolest-looking photos of their athletic accomplishments, action sports fans often want more than a regular lens on their cameras. The fish eye lens satisfies the needs of those who are looking for a much wider angle in their photos. This type of whole-sky lens offers a unique and fun way to warp photos that can capture all of the action sports’ glory in a way that even the best wide angle lens cannot. PhotoJojo sells a Fisheye Lens Adapter that can be screwed onto an SLR camera’s zoom lens; with its short focal length, this device will help transform shots of surfing, skateboarding and motocross riding into amazing looking 180 degree circular curves.

About the author: Alison Stanton is a freelance writer based in Phoenix. While she appreciates the skill and bravery exhibited by action sports athletes, and she has many friends who have sky-dived, she has no immediate plans to jump out of a perfectly good airplane.

By Brian Clapp | July 21, 2014 Sign In or Register to access all articles and insider tips for help in your job search.