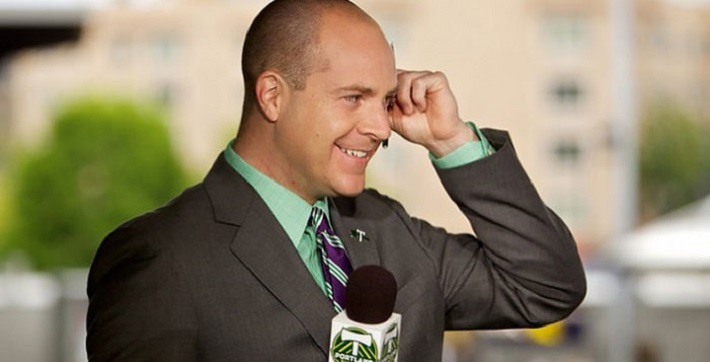 How to Become a Sports Broadcaster

This interview is part one of our three part interview series with John Strong, voice of the MLS on Fox Sports. To hear Strong in action, listen to his call for Darlington Nagbe's 2011 MLS goal of the year at the bottom of this page.

The majority of people trying to complete their dream by becoming sports broadcasters are focused on the wrong things.

Things like catchphrases and having the perfect voice are small pieces of a successful journey, the business of sports broadcasting hinges on something much more important.

“Can you tell me a story?” wonders John Strong, lead play-by-play voice for the MLS on Fox Sports.

“And when your story is finished, will I have understood it, and will I have learned something? Storytelling is just as relevant in play-by-play as when I was doing sports updates on the radio. Things like having a great voice are sometimes overrated. This business is all about telling stories, so...can you tell me a story?”

No skills develop in isolation; it takes years of practice and a focused determination to become a successful sports broadcaster, never mind being fearless in sticking your neck out there.

Strong’s sports career path embodies that determination, and is a blueprint many should follow.

For more on how to become a sports broadcaster here are the steps John Strong took to become the main voice behind the MLS on Fox Sports.

We always stress that making it in sports broadcasting takes a special type of person, focused and ambitious at an early age. While in high school you started Laker Broadcasting - a student-run broadcasting program - and began producing Lake Oswego High sports events, how did this happen?!

Strong: Well, I knew from a very young age that this is what I wanted to do, that becoming a sports broadcaster was my dream job. As a young kid growing up in Portland in the early 90s I was a diehard Blazers fan, meaning I grew up listening to Bill Schonely call games every night, and I wanted to be him.

It really took root when I was in high school; my junior year I "covered" our HS football team on this ancient webpage you could create via oregonlive.com, and I called in updates to a web radio show from games.

Summer before my senior year, a combination of A) really wanting to start doing it for real, and B) the very real chance that I'd be cut (deservedly) from the varsity soccer team made me spring into action.

The OSAA (Oregon State Athletic Association) had done webcasts of the previous year's football semis and final, so I e-mailed to ask if I could be a part in any way. They pointed me to a new website that had just launched, basically a one-step webcasting service, which was looking for exactly what we were: parents or kids that wanted to do High School football.

I obviously jumped at the chance, how cool was this? I recruited a friend of mine at the school paper to help us get PTA money to pay for it, and in return he'd be the analyst. We had another friend who was very IT-savvy (went to MIT) who helped get us up and running and had to get a bunch of administration types to okay it (none of whom had any clue what we were talking about). Understand this was 2002, when no one was podcasting or doing webcasting other than a few radio stations just putting their signal on the internet; we were one of maybe ten student programs that fall.

It was incredibly rough, incredibly low tech, but it was play-by-play.

The big breakthrough was two months in when we figured out how to record the games, so I could listen back and critique myself (I had an awful catchphrase that I killed the moment I heard it back).

We did football and basketball, and the net effect was that I went off to college with a lot of experience, at least enough to start figuring out what sounded good and what didn't.

After high school you went on to University of Oregon – how did you continue refining your broadcasting skills while in college?

Strong: If you are wondering how to become a sports broadcaster,  It's all about reps reps reps.

The 10,000 hour rule is a good point, especially when you're talking about something that's hard to teach in a classroom. I took on everything I could possibly find: reporting, anchoring, and hosting on the campus radio sports and news programs, play-by-play for lacrosse, softball, soccer, hockey, football, basketball (both at Oregon and HS state playoffs).

I was news anchor for a weekly variety show put on by J-School students (in lieu of a full-fledged campus TV station). I got as many internships as I could get my hand on: radio and TV stations, sports teams in Portland over the summer, even one where I was working for a group called the Oregon Sports Authority because I wanted to try something different for the heck of it.

And that's one of the keys as well, I think, is breadth: odds are your first employer (or first few) will demand you do a lot of different things, whether it be both news and sports (and traffic, like I did), running the board, engineering remotes, doing production work, etc. The big thing now is video content for websites. I never wanted to be in a position where I didn't have at least a little bit of experience in something, lest that be where my opportunity came and I wasn't prepared.

That's also one of the big things kids should look for when picking a college:

Sometimes that's the benefit of a "smaller" school like Oregon (as compared to, say, Syracuse): there were far fewer kids looking to do what I was looking to do, meaning I pretty much walked in the door and onto the air.

Key Takeaways from "How to Become a Sports Broadcaster"

Stay tuned for part two in our three part interview series with John Strong, voice of the MLS on NBC. In part two we'll venture into getting from graduation to a real job as a sports broadcaster. And if you have any questions for John - ask them below in the comments.

By Brian Clapp | May 18, 2016 Sign In or Register to access all articles and insider tips for help in your job search.