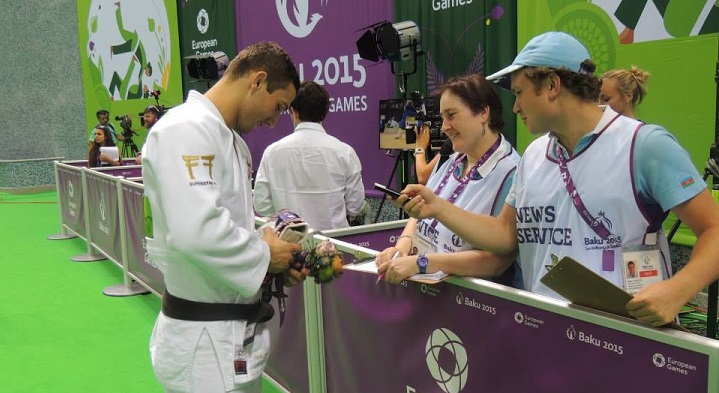 International Sports Reporter: 'You Either Love This Job, Or You Hate It'

The article is a guest contribution from Irena Zakurdaeva Editor and Correspondent of the Russian National figure skating Federation Magazine.

Tatjana Flade is a member of International Skating Union (ISU) media team, writing for almost all figure skating magazines in the world. Her primary task is writing preview and reports for the Grand Prix series events, European, World and World Junior Championships for the ISU website.

In addition to her role in content creation, Flade also translates for skaters and for media in press conferences at figure skating competitions. She speaks English, French and Russian fluently, and she also knows Chinese.

During the summer, when she has no contract with the ISU, Flade visits skaters in their training camps and works at other, non-figure skating, sport events. She was a member of the Olympic News Service team at the 2008 and 2012 Olympic Games covering the Taekwondo and Fencing competitions.

This summer she was in Baku working at the inaugural European Games, which is where we caught up with her:

Let’s return to the beginning of your career at sport events. What was your first event?

Flade: The 1995 European figure skating championships in Dortmund, Germany were my first event as part of the news team.

I wrote articles about figure skating and the venue press manager (German figure skating Federation’s media officer) knew me and recommended me to the LOC (Local Organizing Committee) who then invited me to work at the championship.

How did you start working for the ISU (International Skating Union)?

Flade: My friend and I came to the 1998 European Figure Skating Championships as volunteers. The LOC didn’t pay for our work but at least they paid for our accommodation.

We did the quick quotes and I also I interpreted for some skaters at the press conferences. At that time the ISU decided to create a media team for their events and I was asked to join it. So I started working for the ISU media team at the 1998 World Figure Skating Championships and I received payment for my work, my accommodation and travel costs were covered.

From 1999 I started to work at the ISU Grand Prix series competitions and I received first contract for the season that included the Grand Prix series and ISU championships (Europeans, Worlds, Junior Worlds, Four Continents).

In 2002 you worked for the first time at Olympic Games.

Flade: I was in Salt Lake City in 2001 working for the ISU media team at the Four Continents Championships which served as an Olympic test event.

After the Games in Torino, I thought it would be interesting to work at the summer Olympic Games as well. I am interested not only in Figure Skating but also in summer sports, especially Taekwondo which I practice myself.

I contacted the 2008 Beijing LOC through their website and applied for a position within the ONS for Taekwondo. I then was hired.

What about the most recent competition you were involved in. What was your job in Baku?

Flade: I was part of the EuroGames news team. There was a news team for each competition of the Games. I served as a News Team Supervisor for Taekwondo and Fencing.

At the Olympic Games a press team includes a supervisor, a sport specialist and reporters. But there were no specialists in Baku. I led a team of three reporters that wrote previews, event reports, news articles, interviewed athletes before the competitions and did flash interviews with winners, medalists and favorites who failed.

All this information was published on the official website of the Baku Games.

Your News Team wrote all materials in English?

Flade: Yes. We wrote everything in English and then all the information was translated into Azerbaijani. The site had two versions – in two languages.

There were three people on my team: Kamala Gulieva from Azerbaijan, Adrian Warner Adrian from Great Britain and Nicklas Vinde Matthiassen from Denmark. All people in our group spoke several languages, especially languages which were useful to communicate with athletes. It was very helpful for our job. The team was very skillful and strong.

Every one of us wrote articles and did flash quotes, I edited everything and sent it to the editorial team who published the material on the website.

How did you get the offer to work in Baku?

Flade: There is a group of people who work in sport competitions all over the world. Often they are invited by the organizers who know them from previous events.

I have worked at many major sport events including Olympic Games, so people in EuroGames LOC knew me and they’d sent me a letter offering the job.

Usually you have non-standardized working day and it depends on the competition schedule – what is that like?

Flade: You are correct.

As for Baku, my competitions started at 9 a.m. I came to the venue at least one hour before the event started, usually with one person from my team. I felt it wasn’t necessary to have all the team working all day and I wanted to give them some time to rest. But as a head of the team who is responsible for it I was in the venue from all time until the end of the competition.

Additionally, only the supervisor can file articles to the editorial team. In taekwondo, competition finished around 11pm, fencing finished earlier.

Although we had an intense and tough schedule our job was very interesting.

You speak several languages. How do you learn them and how do you develop and support your skills?

I am lucky, because I like studying languages. However, when I was at school and I started to learn English in 5th grade (in Germany, children attend for 12 or 13 years) I didn’t like it and didn’t have good grades. It was more a problem of the teacher, because once we got another teacher, everything was ok.

In the 9th year I started to learn French, and later I studied in France for one year and this helped me a lot in learning the language. I also studied Latin at school.

Why are you travelling for your job all over the world and have a non-standardized working day?

Flade: It’s interesting for me to have such a job.

It’s not for me working all year in one place and have a daily schedule that doesn’t change. At every competition you meet new people, new athletes, meet your friends, people with whom you’ve worked before. One of my colleagues said: “You love this job or you hate it”. This is very true.

Not everyone wants to have so long working days and travel a lot. But I like it.

Author: Irena Zakurdaeva from Russia worked as press officer of Russian basketball team Spartak (St.Petersburg), now works for the magazine of Russian National figure skating Federation as editor and correspondent and in the concert-sport complex in St.Petersburg “SIBUR ARENA” as press officer. Irena Zakurdaeva also has been working more than 10 years in press departments of LOC’s major sport events like volunteer and paid staff including Olympics, Worlds and Europeans.

By Brian Clapp | July 20, 2015 Sign In or Register to access all articles and insider tips for help in your job search.