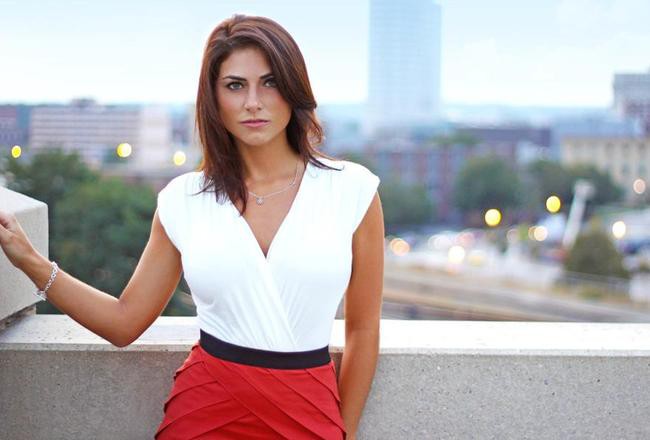 It seems impossible to hit the lottery without buying a ticket, but for Red Sox reporter Jenny Dell anything is possible.

“It was about four months into my time at ESPN [as a Production Assistant] that I was approached in the ESPN cafeteria about working on-air,” says Dell of her chance encounter over a meal. “I saw it as an incredible opportunity, thought to myself, what do I have to lose? And just decided to have fun with it!”

Dell began her on-air career at ESPN by hosting fantasy sports segments on ESPN.com, then began contributing to weekly shows and traveling on special assignments such as the Super Bowl and Winter X Games.

Even though she was a relative rookie on-camera, when the New England Sports Network (NESN) needed a new reporter for the Red Sox beat she jumped at the chance.

“My best friend texted me that the job was available and I called my agent immediately,” recalls the 2007 UMass graduate. “He said that he already sent in my audition tape, but I didn't get my hopes up…even though I had experience under my belt from ESPN, I wasn't sure if they were looking for a veteran sideline reporter.”

Dell must have made one heck of an impression and was hired prior to the 2012 season, but landing her dream job may have been the easy part. From 2003-2009 the Red Sox had the highest local television ratings in Major League Baseball, but since then they've ranked no higher than 4th.

If we've learned anything from speaking with Dell, she’s up for the challenge of putting the Red Sox broadcast back on top.

In High School you had your own catering company and in college you enrolled as a Hospitality and Tourism Management major… when did you decide you wanted to shift gears and move towards sports journalism?

Dell: I picked up my second major in Sport Event Marketing my sophomore year in college. UMass has a program where you can create your own major, called Bachelor Degree with Individual Concentration (BDIC). You come up with a course plan that completes a certain number of credits and I combined my love for sports with my interest in event planning and marketing. I started working for the UMass Athletic Department my junior year, where I helped out in the advancement office and assisted with the event planning for the football and basketball programs.  I loved the constant energy and excitement that came along with the job and it was then that I decided to pursue a career in the sports industry.

When you made the shift did you know you wanted to eventually work in front of the camera? Or did you just like the idea of having a role in sports production?

Dell: I applied for a position as an administrative assistant for three coordinating producers at ESPN, with the intention of eventually making my way to the Marketing department. They ended up offering me a position as a Production Assistant, working on the NBA. I immediately fell in love with production; helping in the creation of show segments and creative video packages for our live game broadcasts. It was about four months into my time at ESPN that I was approached in the ESPN cafeteria about working on-air. I’ll never turn down an opportunity, so I went for it. I started off doing a few fantasy segments here and there, and that turned into weekly shows, and major interviews. I truly believe that working both behind-the-scenes in production and on-air made me well rounded in the field. It’s been beneficial to know both sides.

What was the program like at UMass do you think it prepared you well for a career in sports broadcasting?

Dell: My time at UMass helped me to prepare for this career in more ways than just the classes and curriculum.  I tried to meet and work with as many people as possible, be involved in different groups and participate in a variety of activities. I worked for the UMass Athletic Department, was a head of the Career Day Staff, a student ambassador for the Hospitality and Tourism Management department and a member of the Cheerleading squad. I feel like the more people you meet, and the more involved you become in different facets of life, the more well-rounded you are as a person.

Landing your first job can be quite a challenge, what was your approach to getting hired after graduating?

Dell: Connections. Connections. Connections. I made sure to always maintain relationships. Before I graduated from UMass (Winter 2007) I landed the job at ESPN. A high school friend’s, best friends, father (follow that?) is a Vice President at ESPN. He helped push my resume through and said, “I can help you get an interview, but the rest is up to you.” I took full advantage of that, got the job in production and started six days after graduating.

During your time at ESPN did you have any mentors and if so, what advice did they provide that sticks with you?

Dell: Mike Tirico has been a mentor to me. I worked with him in the Fall of 2009 on Monday Night Football when I was a production assistant on the crew. At that point, I was one year into working on-air with ESPN Digital Media. Mike would pull me aside, or shoot me an email to give advice and feedback on my on-air segments. He’s given me countless pieces of advice, but the few things that stick out to me are to be myself, be professional, treat everyone with respect and always remember that the broadcast is a team effort. To this day, Mike and I exchange phone calls and messages. He is one of the best in the business and I consider myself very lucky to call him my mentor.

So you’re working at a major network getting great opportunities to learn the business and you hear about the Red Sox having a reporter opening, what was your initial reaction?

Dell: My best friend texted me that the job was available and I called my agent (Josh Santry- IF Management). Josh said that he already sent in my audition tape but I didn't get my hopes up. A few weeks later, Josh called while I was at work and left a voicemail. He said, “Jenny, CALL ME BACK RIGHT NOW.” That’s when I found out I was in the running!

Did you think you were an underdog in the process?

Dell: I’m a confident person, but yes, I think I was an underdog in the process. This is a high profile job, and even though I had experience under my belt from ESPN, I wasn't sure if they were looking for a veteran “Sideline Reporter”. Most of my time at ESPN was spent hosting shows/segments and interviews. With that said, I went in there with the same mentality that I did when first auditioning to work on-air. I remember saying to myself, “What a HUGE opportunity. What do you have to lose? Just go in there and have fun!” and that’s exactly what I did.

We often refer to athletes having to adjust to big markets, some thrive, some struggle, as a reporter do you feel the pressure of covering a major market team?

Dell: Getting this opportunity in Boston has been a dream come true. I welcome the challenge and knew exactly what I was getting myself into. Boston fans are so passionate and knowledgeable. It makes me strive to be the best I can, and to always be prepared. There is an immense amount of pressure in this position and this market, but I think the majority of that pressure comes internally. Everyone is their worst critic and I expect a lot from myself.


What did you learn from this interview?

By Brian Clapp | June 17, 2013 Sign In or Register to access all articles and insider tips for help in your job search.