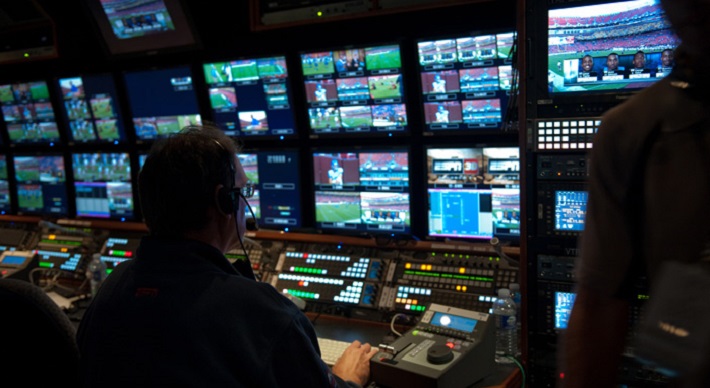 A Day in the Life: Producing Live Sports

There is nothing quite like curling up on the couch on a nice weekend afternoon and enjoying a little sports on the television.

But just like Santa Claus has to work on Christmas, a whole crew of people are spending their weekend hard at work delivering the entertainment to you.

Trust me, they aren't complaining.

Working in live sports production is one of the most thrilling jobs you could ever desire, especially if you've ever wanted to be close to the action.

To really understand the level of detail that goes into every production we enlisted 25-year veteran sports producer Dennis Kirkpatrick to walk us through a day in his shoes. Kirkpatrick has worked for all the major networks; ESPN, Fox Sports, CNN - you name it, and has produced everything from Track & Field to college hoops.

Here's a day in the life, producing live sports from the mind of Dennis Kirkpatrick:

The preparation you do before game day is really the most important part of the week. Unexpected things are going to happen during a live sports production, but if you are prepared for all the things you can control, it allows you to react freely to the things you can't.

In a nutshell your preparation includes:

Tip: There is no such thing as a normal day in the life of a television producer, every day is different even if you prepare the same each time. Without fail something unexpected happens from a production standpoint, frankly the very nature of sports is unpredictable, which I guess is why so many people like working in sports

For me, most of the games I have been producing lately begin at 1 PM Pacific. This is a special group. Often, we are the first sports telecast of the day for west coast viewers. Disadvantages – you gotta get up early. Advantages - you are home at night.

4:00 am:  Rise and shine. Time to make sure the formats are in order. Everything is scripted out before the game starts and formats are how that happens.

5:00 am:  Buying breakfast or coffee and snacks for the crew. This is a very important step, because if the crew is happy everyone will be happy.

Producing live sports is really about aligning a team of people toward a common goal. You can't do it all, every individual on the crew has an important role that is essential to a smooth production. Buying breakfast might seem trivial, but it's a small detail that goes a long way with the team.

6:00 am:  You want to be one of the first people at the production truck. What does that give you? Well, credibility for one thing. The workers with you with respect you for it, and you can answer questions early.  Here are some of the big ones:

7:00 am:  Working on tape elements and verifying graphics. Tape elements are the tools that a producer uses inside the shows to tell a story visually, such as:

If the game is a big one, then you may have an associate director who verifies tape elements, since your pate will be pretty full.

Tip: As a live sports producer, what you put on the air is the most important thing that you do.  Be organized and know what you want.

Action on the Court

9:00 am:  Normally the first shoot around, which is very light practice and is important to observe. This is a great time to connect with coaches and note which players you will be focusing on. Often, coaches will give you little nuggets of information that can help you highlight interesting parts of the game.

Other things to look for:


It's also crucial to connect with your team of announcers and the director to share notes on what you expect to be important themes of the game. Just think about how this whole thing works - the producer organizes the show, the director determines the visuals and the announcers tell the story - if we aren't all on the same page, the game will look disjointed and sloppy.

10:00 am:  Crew goes to lunch while the other team practices. You don’t have time to eat, which is the price of being the boss.

While everyone else gets their fill, you hold a production meeting with the director and talent. For a producer, the talent is the MOST important relationship you have. OK, your spouse, partner or flavor of the month aside, it is that important.

If you have worked with the talent many times, it becomes second nature. If it is a first time, you must decide how you are going to do things, like counting to commercial and promos, replays and the myriad of other items that you will do together.

Trust is paramount for each of you.

11:00 am:  Crew is back and pre-production begins: voice over teases, make sure that the effects are correct, check lineups, spellings, special graphics, etc. It's almost go time, so it's time to really focus. You begin to look at the clock and it never feels like you have enough time, no matter how much you have prepared.

Noon:  Rehearse the opening and possibly record it if you have all the elements (i.e. various pieces of video and sound). It's always better to record the open and then run it off tape than try to voice it live, too many things can go wrong during a live read with many elements.

Set the clock in the production truck to line up with the clocks in Bristol, Los Angeles or Houston - depending on which network you are working for.

Sometimes, you will want to have the post-game meetings in the airport bar….watching another game!

By Brian Clapp | June 29, 2015 Sign In or Register to access all articles and insider tips for help in your job search.