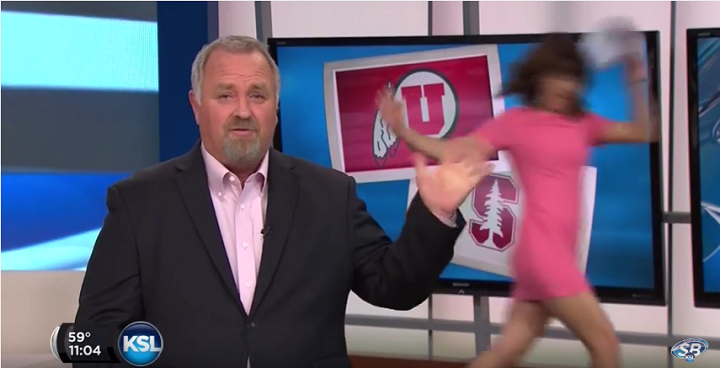 The execution of television is not as difficult as it may seem. There are cameras pointing a very specific direction, and there is a safe zone behind them - i.e. where the camera's aren't pointing.

If you have a need to get from one side of the studio to the other, the safe and smart choice is to go behind the cameras when the little red light is on. Yes, the little red light whose singular role is to let you know this camera is on, this is not a drill and WE ARE LIVE ON THE AIR.

Alas, Brittany Copeland, sports reporter for KSL-TV in Salt Lake City, decides to take the short route across set, AKA the insultingly amateur move of walking behind her co-anchor during his live sports report. Just to be clear, Salt Lake City is considered a major market, where the staff should be highly trained in the art of not making stupid mistakes about where to walk on set.

Compounding the issue, as she deftly tries to tippy toe across the set, as if this would make her camouflage, she falters and falls, only to return and say "sorry":

At least veteran sports reporter Rod Zundel was able to pull of the embarrassing gaffe with aplomb, making the instinctual I just sucked a rotten lemon face, while holding back either a cute giggle or the need to vomit. When his mouth finally opened back up, bereft of said lemon, it uttered: "hello!...that's going to make somebody's...something." Masterful.

This is quite possibly one of those places I over-react as a former news director, but to walk behind your co-anchors live report is the ultimate sign of disrespect to them and your audience. Her falling down was the TV karma gods in action...then again, KSL is probably getting more views for this than they do their regularly scheduled PAC-12 baseball coverage.

Between this and KTLA meteorologist Liberte Chan having to change her outfit on air based on the station getting "a lot of emails about her dress" it's been a bang up weekend for the class and authority of our local news agenda setters.


By Brian Clapp | May 16, 2016 Sign In or Register to access all articles and insider tips for help in your job search.