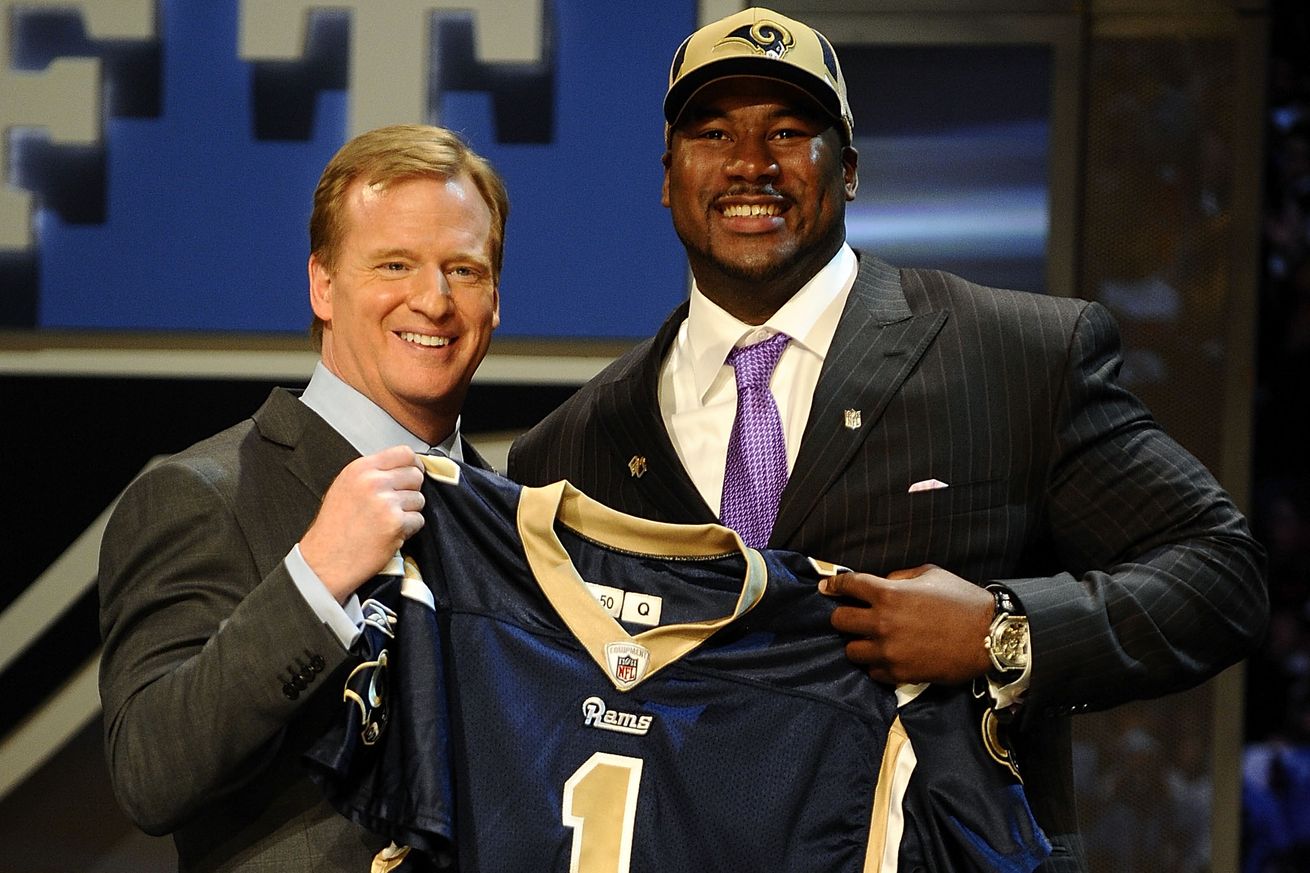 Analyzing the NFL Draft Myths That Could Ruin Your Team

The NFL draft is a mystical event, where even the executives who study and scout the available talent all year will describe their chance of success as “a 50-50 coin flip”. With success so unpredictable and fleeting, many teams fall back on convenient myths and old general manager tales in an attempt to make sense of their options.

For some reason, fear I would guess, even after years of data pointing them in a different direction, there is a comforting feeling that comes from following someone else’s belief system, rather than zigging when everyone else is zagging.

These myths of conventional wisdom and groupthink are a powerful elixir, taking hold of the brain and often rendering scouting directors and general managers powerless against them.

Let’s break down four of the most oft-repeated and flawed logic myths that surface every April.

NFL Draft Myth #1: Drafting and Offensive Lineman in the Top 10 is a Safe Choice

Unsure of who your team should pick? Torn between the upside of a defensive end, the glitz of a wide receiver or the necessity of a quarterback? Draft a left tackle the myth concludes, you’ll have a 10-year starter at an important position while your chances of busting are slim.

What makes this myth so powerful is that it is rooted in just enough tempting truth. Of course your team will draft the next Walter Jones, Jonathan Ogden or Orlando Pace, right?

Anyone feel like Greg Robinson #2 overall pick of the Rams in 2014 is going to blossom into a top flight OT? (Psst…hey Rams stop drafting OT’s at the top of the draft already)

The truth is, OT’s bust just as often in the top ten as any other position. Study the draft history and every position has failures and busts. Nowhere is safe, so stop playing it safe and take the best talent available regardless of position.

This is where the sports media comes into play.

Every draft needs an either/or at the QB position, and if there isn’t one, the media will fabricate one because it makes for good ratings and award winning Pro Football Talk segments with Mike Florio.

The truth is, the second QB taken in the draft is usually a far departure from the first. Picking a franchise QB is not as easy as selecting the second highest rated option.

Over the last 10 drafts, these are the QB’s drafted second. Not second overall, just the second QB chosen:

Concurrent with these non-Joe Flacco debacles or the too early to tell Marcus Mariota story, franchise building blocks Derek Carr, Russell Wilson, Andy Dalton and Kirk Cousins were chosen much deeper in their respective drafts.

This is not to imply picking later is easier, it’s simply to point out bringing a franchise QB into the fold isn’t as easy as getting near the top of the draft.

This is a particularly interesting mythology to investigate this year as Heisman Trophy winner Derrick Henry carried the ball 395 times last year alone, and over 600 times in his 3 years at Alabama.

In the NFL it has long been hypothesized that the drop off in production of most high-profile running backs comes after a season in which they have carried the ball 370 or more times.

For example, in 1997 Hall of Famer Emmitt Smith carried the ball 377 times for 1773 yards and 25 TDs - a bang up job by a heck of a running back. The following year, his yards per carry dropped by over a yard, his touchdowns dropped by ten and he ran for over 500 yards less on the season.

So what is to come of college running backs who cross a similar barrier?

It stands to reason teams drafting these over-worked college athletes are getting them on the downside of their career, rather than the upswing, but the data suggests otherwise.

Most college teams lean on their star running backs, often because their QB play is far from spectacular and running the ball presents less risk. But contrary to mythology, this does not render these athletes moot at the next level. Maybe the contact is less severe in college or their bodies are just better able to handle the rigor, who knows, but don’t shy from Derrick Henry, at least not for that reason.

Now as for whether drafting a RB in the first three rounds is worth it in the first place, that’s another story.

NFL Draft Myth #4: Trading into the Top 10 of the Draft is the Best Way to get Elite Talent

This is a myth dressed up as logic. The higher you are in the draft the more options you have when you choose, therefore the more likely you are to select top tier talent. Makes sense, right?

Let’s break this into two categories – if you are selecting in the top ten based on your lackluster record, great, the world is your oyster, live long and prosper. If you are a team on the outside of the top ten who gives up a bounty of picks to break into what you perceive as the cool kids table…history is not your friend.

First, let’s check the draft results back to 2005 and determine where Pro Bowlers have come from:


You’d expect a downward trending line graph the further you get away from the top pick, but what you get is a pretty balanced equation. Over a large sample size it’s pretty clear each team has a relatively even chance of picking an eventual pro bowler at any point of the first round.

In 2013, the Miami Dolphins traded their #12 and #42 picks to move up to #3 and draft Dion Jordan – a complete bust. Had they stayed at #12, Sheldon Richardson or Star Lotulelei would be on their defensive line right now and at #42 they could have chosen between guys like Menelick Watson, Kawaan Short or Kiko Alonso.

In 2009 the New York Jets traded the #17 and #50 pick along with three players for Mark Sanchez – another flame out.

In 2012 the Redskins gave up three 1st rounders and a 2nd rounder for Robert Griffin III – do I need to explain that folly?

Just the fact Mike Ditka traded his entire 1999 draft, plus two more picks in 2000, to move up seven spots to draft Ricky Williams, should remove him from the set of NFL anything.

Bottom line: If the draft is like choosing between red and black on the roulette wheel, wouldn’t you opt for more spins?

Many of these perceived truths of the NFL draft are rattled off as fact when they are no more accurate than the belief a little hair of the dog will cure a vicious hangover.

The teams that are best in the draft - the Steelers, Packers, Patriots and Ravens for example – rely on pure talent evaluation, not the temptress at the top, or the assumed safe choice. And even with a unified and consistent approach, these successful teams all still have a few Ras-I Dowling’s in their closets.

By Brian Clapp | April 28, 2016 Sign In or Register to access all articles and insider tips for help in your job search.