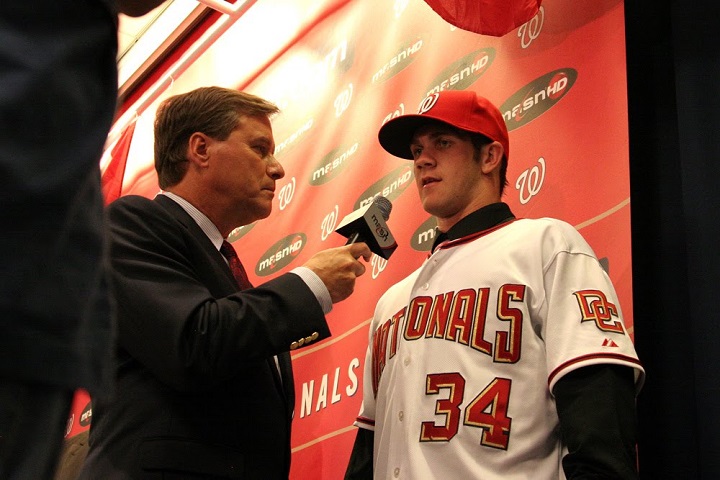 Amid the raucous nature of live sports a voice is always there to guide the vision before us, to explain confusion, convey excitement or crystallize history in the making.

The words of a play-by-play announcer are often immortalized alongside the events themselves, like a beautiful bow on a present delivered right to your couch.

For Bob Carpenter, play-by-play voice of the Washington Nationals, preparation leads to success in those moments, but oftentimes spontaneity creates the best, most honest, results.

"I try to be spontaneous, but these days with highlights apt to end up anywhere, you catch yourself planning ahead. When the Nationals clinched their first playoff spot in 2012, I had sort of planned ahead: 'Nationals fans, the wait is over! Your team is in the playoffs!' I thought it was a good call, not over the top."

When I called Mark McGwire's 70th home run, it was tough because he hit a low liner to left that barely got out: 'There it goes! Can you count to seventy? A three-run homer ... seventy!' That was totally unplanned, and I guess it came out OK."

After almost four decades doing play-by-play Carpenter has been front and center as sports broadcasting has evolved and shares with us some of the things he has learned from the booth:

Often young broadcasters underestimate the struggle to land that all important first job, almost blinded by seeing their name in lights, how did you get your career started and get your first big break?

Carpenter: I was called by A. Ray Smith, owner of the old Tulsa Oilers (Cardinals AAA affiliate) in 1976 just months after graduating from college; he liked my tape that I had sent out to over 30 minor league teams as I graduated, and offered me a job as his #2 radio guy.  Problem was, he didn't have that job in his budget, but he arranged an advertising sales job for me with a friend's station, so I did that during the day, then went to the ballpark for night games.  I didn't travel with the team, but got 60 or so games of valuable minor league experience just out of college.

Two other breaks came my way early; the Tulsa Roughnecks soccer team had just come to town, and I walked into their office and camped out until I got an interview, they hired me on the spot and I did Radio and TV games and other odd jobs for the club.  Nobody around Tulsa knew how to broadcast soccer, but I had grown up playing in St. Louis and announcing games in college, so that was a big break that led to soccer TV work on ESPN and USA Network in their early years.

The other break was Bud Sports in STL hearing my soccer work and hiring me for indoor soccer and other projects, and I ended up with the Cardinals TV job in 1984.  My versatility in being able to do many sports helped me big time there.  Young broadcasters should key in on several sports, not just one.

Who were your mentors as you came up in the business and is there any advice they gave you that still holds today?

When I was coming up, few veteran guys were open about helping me, so I pretty much learned everything on my own by trial-and-error.  I worked early-on with Jack Buck and Mike Shannon in St. Louis, but I was totally on my own in that situation.  It was intimidating but I got through it.  In the '70s and '80s, young announcers had few, if any, of the resources they have today. So, it was "get yourself on the air and learn on the fly."

One of my personal pet peeves is the reliance on catchphrases in lieu of information and story-telling… do you have any pet peeves that you see in the industry?

Carpenter: My Radio & TV professor at UMKC taught "economy of words". I hate listening to people (mostly on talk radio) who sound to me like they're filling time, or a play-by-play guy who takes way too many words to call the game.  Get to the point and move on.  Cliches and creative description are OK from time to time, but too much sounds like you're being too cute.  There's an NBA guy I've heard who can't call a basket without some contrived catch-phrase.  At first, it's OK, then it gets to be too much play after play.

When you interview a player what is going through your mind, and where do young broadcasters go wrong?

Carpenter: I listen to my subject and form my next questions from there.  I also chat with him/her before we start to see if there's anything they'd like to get across.  Too many interviewers plan the whole interview ahead of time and don't stay flexible.  Jack Buck's pregame chats with players in St. Louis were the best off-the-cuff, impromptu and fun interviews I ever heard.

Technology has changed the way we watch sports dramatically over the years, do you think it has improved the fan experience or just added more noise and distraction away from the game?

Carpenter: It depends on what you want from a game or telecast.  I didn't grow up with the internet, so I'm happy with a good game, informative graphics and a good announcer call.  The generations following my age group evidently are easier-distracted and need the screen full of info and news.

I've had to make many adjustments over my 36 years on the air to adapt to changing technology.  And in my later years at ESPN (they let me go with a 2-minute phone call in '05 after 18 years) I had producers half my age who had their ideas about how to revolutionize sports on TV, and that made for some uncomfortable moments, then some very good ones when I realized they had some fresh ideas and I was willing and able to adjust.

What do you think makes a great play-by-play announcer?

Carpenter: A good voice (not everyone can sound like Ron Franklin or Jack Buck), timing, accuracy, humor and the ability to ride the wave of a game ... calm when things are chugging along, then more excited (but not screaming or over the top) when things get exciting.

I can tell you that too many guys these days sound like they're having a heart attack for touchdowns, walk-off homers and late-game baskets.  Always being under control is important.  In this day and age of often overbearing analysts, the ability to work with ex-players is huge as you guide them through a telecast hopefully without them squeezing the life out of it.  A baseball season is the ultimate test of this.

We often focus on skills people need to do their job, but are there certain tools of the trade for play-by-play announcers?

Carpenter: Preparation is huge, and I think if you have the tools the rest can be easy. It took me years to learn how to prep for games and use my time wisely, especially on TV where you can over-prepare only to have the analyst run away with the show.  This can not be explained or taught; it has to be learned, game after game, and I'm sure we all have our own routines and stories on the subject of prep.

In football and basketball, good, hard-worked charts are huge.  In baseball, good notes and files on players make things easier before you get to the ballpark, and I like to think my scorebook has helped many guys over the years; at least, they tell me it's been a huge help to them to stay organized and ready for the myriad of situations that come up.

You've done play by play for just about every sport imaginable, how does your preparation change from sport to sport or is it a similar process you go through?

Carpenter: The process is similar, but each sport is unique.  Football and basketball; you talk to coaches days before your game, get your charts/stats done and you're pretty much ready when you get there.  Baseball is much more spontaneous as you get tidbits and nuggets around the cage, some maybe just an hour or two before first pitch. And sometimes lineups are later than you would like as you get ready.  I've done very little hockey, so I'm not familiar with that routine, but I think it could be similar to some of the soccer I've done.

Key Takeaways from Bob Carpenter, Voice of the Washington Nationals


What kind of style do you like from a play-by-play announcer?

By Brian Clapp | June 17, 2013 Sign In or Register to access all articles and insider tips for help in your job search.