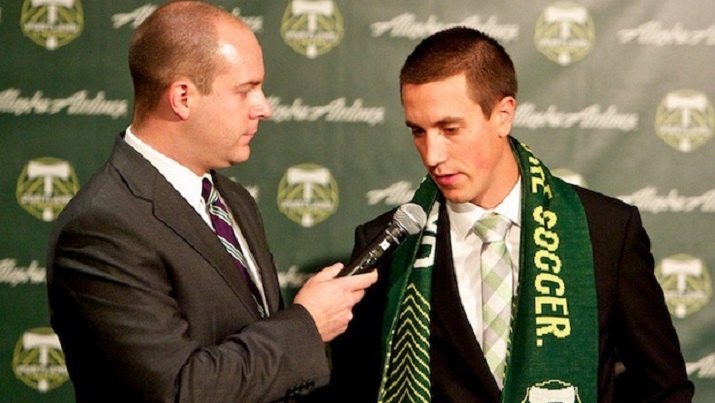 This is part three of our interview series with play-by-play announcer John Strong from the MLS on NBC. Part one discussed the early stages of preparing for a sports broadcasting career, part two actual on the job advice and part three preparing for game day. Leave your thoughts and comments below - enjoy!

Preparing for game day takes on a different meaning depending on your role in sports.

For some it means organizing equipment or going through final check points, for others, like play-by-play announcer John Strong of the MLS on NBC, final preparations can deal with much different concerns.

“I always like to have a good meal in me before going on air, some guys I work with are very careful diet-wise on game day to prevent ‘stomach issues’ while on air. That is a VERY valid concern, but I, knock on wood, have a forgiving stomach and I like trying new things.”

So much of the work, pouring through names, statistics, strengths and weaknesses, takes place early in the week, but part of Strong’s preferred pattern is to leave a little to the last minute.

“I leave some of my prep work to finish up on game day so it's all fresh in my mind, but I always need to have time at the hotel to watch TV or something, take my mind of things. I also like to have at least a minute before going on air to just be calm and quiet.”

Patterns are unique to each sports broadcaster, a recipe for one persons success does not always lead to the same result for another, but there are tips and tricks that can be picked up along the way to be most efficient, and that is where a young veteran like John Strong can help you on your path.

Here’s more with the lead voice of the MLS on NBC, John Strong:

After just a short time as the regular play-by-play announcer for the Portland Timbers, you were named the lead soccer commentator for the MLS on NBC Sports, tell us about that moment…were you shocked? Scared? Confident?

Strong: It was a slow burn.

I'd filled in on a few games as the B-Team guy in 2012, though when I first found out about that opportunity I literally jumped into the air and clicked my heels, and was petrified in the minutes before that first fill-in game. I called my wife to help settle my nerves; I now do that before almost every game.

In December of 2012 I was told I might be taking over full-time, and it came out in bits and pieces in the ensuing months before everything was nailed down in the spring.

I was definitely nervous before that "first" game in July, and it really took until maybe September before it all felt "real", before it all settled in that I wasn't the fill-in guy anymore, but this was my job now. That's not to say I wasn't confident I could do a good job, even though I was well aware I was very new, and very young, and was at the start of a steep learning curve.

But I think it's good to have some kind of nervous energy before a game or a broadcast, it means that you care.

Let’s talk about preparation –what is your process to get ready for kickoff?

Strong: This is hard to describe, and each guy is different, and for that matter my prep and notes are always evolving. But they revolve around one big idea: becoming an expert on both teams, so that no matter what happens in the game, I have something I can say about it.

Form, injuries, history, players' back stories, what's coming in the future...think of it like prepping for a final exam in school. You can't be sure what the questions will be once the game kicks off, but it's your job to have the answers.

Generally speaking, I'll go back three games on each team and master these pieces of information:

It's a good way to get a current picture of what's going on, so that it's as if you've followed them all season. I'm trying not to be as stat-heavy these days, but I'll still sometimes research numbers if there's an interesting story behind them.

And the big thing I'm trying to be better at when I organize my notes for air is being able to find what I need when I need it, both in the sense of organizing it well, but also not having so much on the page that what I really need is lost in the jumble - which has been a problem for me this season at times.

What is your normal game day like for the MLS on NBC?

Strong: Normal is a very nebulous concept in this job - but I always like to follow this basic pattern:


And just before air, it’s important for me to have at least a minute before kickoff, to just be calm and quiet.

Do you plan out certain phrases you want to say during a broadcast or is it totally in the moment and organic?

Strong: Well, it's better to be organic and original, but you also want to be prepared.

I try to have something like a "topic sentence" for each team written on my notes: what's at stake for them here? What's their big storyline right now? And yes, I'll sometimes go over in my head how I want the build up to the kickoff and the first few seconds of the match to sound, or maybe scenarios of what to say after the game ends.

It's not necessarily about having the perfect phrase as much as just making sure I get out what I need to get out, especially in the chaos of, say, rushing through things in the seconds before the game starts. That way, it's organized, it sounds better, and again, it better tells the story to the listener.

And if any play-by-play guy says they don't imagine from time to time different ways they might call a big moment, they're lying. But again, especially if it's more of a loose outline than written out word-for-word, I see that more as being prepared than being scripted.

By Brian Clapp | December 05, 2013 Sign In or Register to access all articles and insider tips for help in your job search.