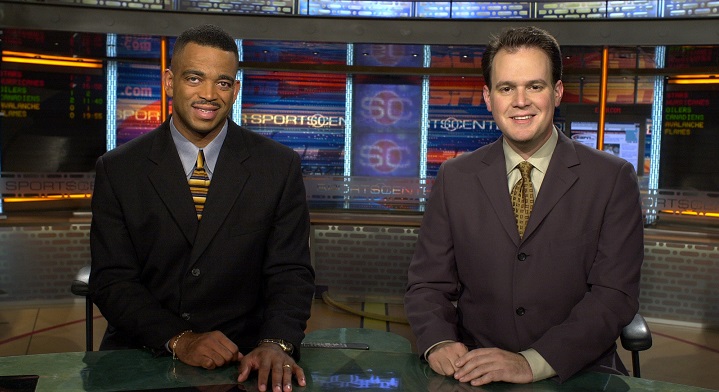 Preparing for Death: The Most Difficult Task in Television

Within moments of Hannah Storm announcing to the SportsCenter watching audience that longtime ESPN host Stuart Scott had passed away at age 49 after a prolonged battle with cancer, a 14 minute and 52 second trip down memory lane aired.

Much of the story was told from a viewpoint we don’t often see, a behind-the-highlights look at the subtle reactions his myriad of co-hosts would emote while Scott delivered his trademark lines. A young Rich Eisen looking adoringly at his so-called "TV wife" as he delivers a line in a manner only he could pull off.

Former ESPN colleague and fellow cancer battler Robin Roberts artfully narrated the commemoration that was littered with co-anchors sharing behind the scenes stories of the man that became a legend in Bristol.

It is beautiful. A study in story-telling that could be analysed in classrooms spanning from Emerson College to Chapman University. (see and study the entire video tribute at the bottom of this article)

But how did it happen? Stories told this well take weeks of writing, interviewing, producing and editing, and yet it aired shortly after his death was announced.

In any facet of television reporting, whether it is news, sports or entertainment, advance preparation is paramount to success. Being proactive provides the best chance of delivering on audience expectations, if you react you are often too late.

I vividly remember during my first year at CNN being fascinated by what our team of writers were working on at any moment. That was my gift of being on the inside, knowledge of what was happening before the public.

As I sat down one day to get my editing assignments in order I casually asked a staff writer what he was up to, his response, “I’m writing a Ted Williams obituary and life retrospective.”

As a card carrying member of Red Sox Nation I was floored, how had the Splendid Splinter died and I knew nothing about it?

The writer then followed up nonchalantly, “After I finish this one I’m on to Arnold Palmer and Richard Petty.”

Oh dear god. This had to be the worst day in sports ever!

As the pit in my stomach grew a Producer nearby, realizing my state of disbelief, explained that these were to prepare for the inevitable and predict the unfortunate, not because they had all just died.

What can I say; I was one year removed from dorm life and had spent the majority of my time thus far editing highlights, not building editorial calendars or contingency plans for worst case scenarios.

The writer then took me to a cabinet where all of our Obit features sat waiting - written, produced, edited and ready to air at a moment’s notice. As I stared down the names of many of my childhood heroes - Magic Johnson, Johnny Unitas, Derrick Thomas, Walter Payton - I felt this overwhelming insincerity, like I was part of a death pool where we bet on other people’s misery.

That feeling passed, as I realized this was an essential part of the career path I had chosen. It was an enlightening moment for the young journalist in me, the first time I realized being proactive, preparing for all situations no matter how dreadful, was the key to success in television reporting.

Stuart Scott’s battle with cancer took this preparation to the next level. His obituary was being worked on as he lived and worked in the office. His friends and colleagues were being interviewed about his pending death.

“He brought his own attitude and energy and lexicon and he owned that distinctive style of doing the show the way he wanted to do it”, says co-anchor Scott Van Pelt as part of the 14 minute plus epilogue.

He brought. He owned. He wanted. He didn’t. He bulldozed.

Is it cold-hearted to be crafting someone’s eulogy before they die?

No. It's just the reality of a business that Stuart Scott loved.

Years later as I sat in the Producers chair the day Dale Earnhardt unexpectedly died on the Daytona 500 track, that obituary cabinet, so infrequently called upon to do it's work, cast in the back of our newsroom, bellowed out to me, “I’m in here, I’m ready, my time is now.”

From what I am told of Stuart Scott the man, if he walked in on an editor in the midst of crafting his ESPN legacy set to air upon his death, he wouldn't have been mad, he probably would have used the awkward moment to console the editor and let them know it was OK.

As Rich Eisen said in his tearful, honest moment on NFL Network: “Wherever you are Stuart...Godspeed, rest in peace”

By Brian Clapp | January 06, 2015 Sign In or Register to access all articles and insider tips for help in your job search.