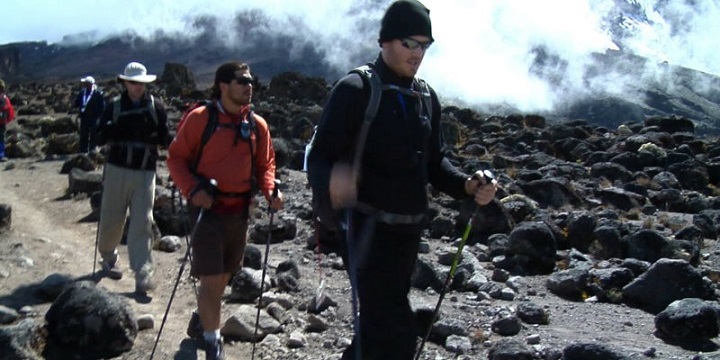 40,000 people per year seek to climb the world’s highest free standing mountain, nestled in the northeastern corner of Tanzania, just a glance away from Kenya.

At 19,340 feet above sea level Kilimanjaro is the highest peak in Africa, placing it among the “Seven Summits”, a mountaineering challenge consisting of the highest mountains on each continent.  On average 10 people per year die in the attempt to climb the dormant volcano, altitude sickness or rock slide accidents are the most common form of tragic consequences.

Bonner Paddock is unlike any other who sought to conquer the titan of Africa – Bonner has cerebral palsy (CP), a permanent, non-progressive disorder that affects physical capabilities, mainly in the form of movement. His goal wasn't just to become the first with CP to climb Kilimanjaro unassisted, it was to raise funds for a center in California so afflicted children could get comprehensive care in one spot.

A successful climb would not only set in motion plans for the California care center, it would change the narrative on CP and inspire a generation of youth to know the only limitations you have, are the ones you put on yourself.

“The training was more than I had ever done. It forced me to focus on the weakest parts of my body like legs and core. These were things I always avoided in the gym because I was embarrassed by how little strength I had in those areas. It forced me to learn about better nutrition and subtleties in my body that I had blocked out because I was different… or at least that is what I told myself.

“When times got tough, I just keep thinking about the kids in the early learning centers.  I would do anything for them. When you have met some of these kids in person and spent a lot of time with them, you really appreciate just how good you have it and that if they were working hard to be more able bodied then who am I to worry about anything...even pain or quitting.

“If they can push through the struggles of their daily lives just to do the things that you and I take for granted, I could certainly spend 8 days in pain climbing a mountain in frigid temperatures…”

“We didn't use the word disability in our household”

Long before the thought of climbing Kilimanjaro became a beacon, guiding his journey, like so many others who struggle with disability, Bonner’s early childhood wasn't simple.

“I harbored some animosity and angst towards those that were not nice. I spent most of my childhood trying to hide my disability and just fit in.”

His left leg dragged behind his right and his balance was poor. Bonner wasn't like the other kids on the playground which made him an all too easy target. But frustration and anger wasn't reserved for just the schoolyard bullies, seven different doctors were unable to properly diagnose his condition, no one really knew what was wrong or how to handle it.

It wasn't until the age of eleven, after years of braces, casts and support contraptions that he was properly diagnosed with CP - not exactly a reason to celebrate, but finally a moment of clarity and perspective that allowed the family to move forward with a goal.

When you believe you are unable to accomplish something, you never will. Self-doubt becomes your self-fulfilling prophecy. Continue long enough hearing your peers remind you how different you are and that is all you begin to see in the mirror.

Someone broken. Someone incomplete.

A strong family can help.

“Growing up I wasn't treated as if I had a disability by my family, but around other kids it was a little rougher with teasing, acceptance.  Along with my brothers, I figured out a way to fit in as best I could with all the other kids by playing sports. We would find a sport or position that allowed me to participate and make it work.

“If it was soccer, I played goalie.  Nothing stopped me from participating.  I just needed to adjust.”

Everyone needs a mentor, a reliable source to lean on, talk to and feel inspired by – and when that person is in your family circle, it makes it even more powerful.

“My older brother, Mike, was probably the most influential. He didn't treat me any differently. We didn't use the word disability in my household. We challenged each other, like most brothers do and my competitive spirit didn't keep me down. When they headed out to play sports, I was right behind them figuring out a way join in.”

After graduating from San Diego State University with a degree in Business Management, Bonner dedicated himself to his career in the sports industry, becoming Director of the National Sports Forum and eventually making his way to the Anaheim Ducks as the Director of Corporate Partnerships.

It was during his time with the Ducks that his life changed forever.

“During the NHL lockout in '04-'05, we were asked to go out into the community and donate our time to our charity of choice – "make a difference".  It was at that time that I joined the board of United Cerebral Palsy of Orange County (UPC-OC).

“While on that board, I would spend time in the "Life Without Limits" center and was exposed to so many incredible special needs kids, who were finding ways to push beyond their own limits in their daily lives.  Such simple tasks that able-bodied people can accomplish so easily were an incredible challenge to these young children, yet they were in the center every single week pushing through their therapy sessions.

“I also met a lot of great people during my time on UCP-OC's board, one of which was Stephen Robert.  He and I participated in the Orange County Marathon to raise funds for UCP's center.  It was during that race that I met 4 1/2 year old Jake Ryan, Stephen's son, who was born with cerebral palsy.

“That evening after the marathon, Jake passed away in his sleep.

“I decided at that very moment that I would do whatever it takes to help the young Jake's of this world – even if that meant climbing Mt. Kilimanjaro or competing for 16 1/2 hours in the Ironman World Championship.  While I have cerebral palsy, I am blessed with more capabilities than most disabled children have and I needed to do something with the gift that I was given.”

“I figured out later in life that I was actually given a gift.”

Jake inspired Bonner to channel his gift and to make a difference for all the youth dealing with cerebral palsy, unable to get the therapy they need. In 2008 he announced his attempt to climb Kilimanjaro, which if successful, would make him the first person with CP to climb “The Mountain of Greatness” unassisted.

It took Bonner 8 days to complete his climb which raised $250,000 and allowed him to begin the OM Foundation.

"The mission of OM Foundation is to raise awareness and support centers that provide services to empower children with disabilities and their families to live life beyond limits in their communities.

“OMF's message is focused on building an awareness of the special needs community and communicating that we are all equal (able bodied and disabled).  Our goal is to work together to raise funds to provide the therapy that gives special needs children hope and a fighting chance.”

The Ironman Triathlon isn't for the faint of heart, a challenged dubbed “the toughest one day event in sports”, where even the best athletes in the world take 8 plus hours to complete the grueling 140 miles of racing.


But Bonner had a secret weapon, not the type that would vault him to the finish line like Wile E. Coyote on an Acme branded rocket ship, his power came from others.

“I call it my furnace. It's something I feel deep inside me that when things are getting really bad with pain or fatigue, I tap into it to push me through. The furnace is emotions that I have experienced both when I was young (and not always treated nicely) as well as positive emotions that I feel only when around the kids we are helping.

“They are by far the most inspiring and motivating people I have ever been around.”

16.5 hours after starting his Ironman, Bonner crossed the finish line in the most joyous and genuine way you will ever witness - his exhausted and depleted body taking the highest leap of his life.

“Besides having glimpses of memories in the finishing chute as they call it, I was in such bad physical and mental shape . I do remember getting a huge hug coming across finish line from Ironman legend and my coach Greg Welch and then collapsing and being taken to the medical tent for 2 hours.

“Looking back at the video (right) it was a moment of total euphoria and relief for this goal that I set and was able to scrape by just under the cut off time of 17 hours.”

Since Bonner began raising funds for special needs children back in 2006, he and OMF have raised over $1 million.  At a rate of $100/hour, that equates to 10,000 hours of therapy for children with disabilities.

Bonner’s contributions aren't solely in the form of physical challenges; he is also a gifted speaker sharing his motivational stories as part of IMG speakers. Having conquered undeniable odds, he is uniquely qualified to discuss personal battles of self-doubt, finding internal strength, setting goals and never giving up.

“With my speaking engagements, OMF's Team Jake Program and my book coming out in the next 12 months, there is a ton of potential in these programs to help support early learning centers all over the U.S. or world for that matter.  There is no limit on what we can achieve together.  My dream is to build a legacy that will go on long after my time on earth and we have set out to do just that!”

And although Bonner has done so much for special needs children, the OM Foundation can achieve much more with help from others.

“You can help by joining OMF's Team Jake! It can be anything from a garage sale to an Ironman -- whatever people feel like doing in order to be a part of Team Jake.

“One girl sold lemonade and raised over $700 in 2 hours!  It's just magical to be part of something so true to the core. Anyone can create a Team Jake either by doing something as an individual or putting a team together, identifying a fundraising event and raising money for children with disabilities.

“I often hear from parents of special needs children that they just want their child "to be accepted, to fit in".  My "gift" is now the vehicle to help make that happen.”

By Brian Clapp | June 04, 2014 Sign In or Register to access all articles and insider tips for help in your job search.