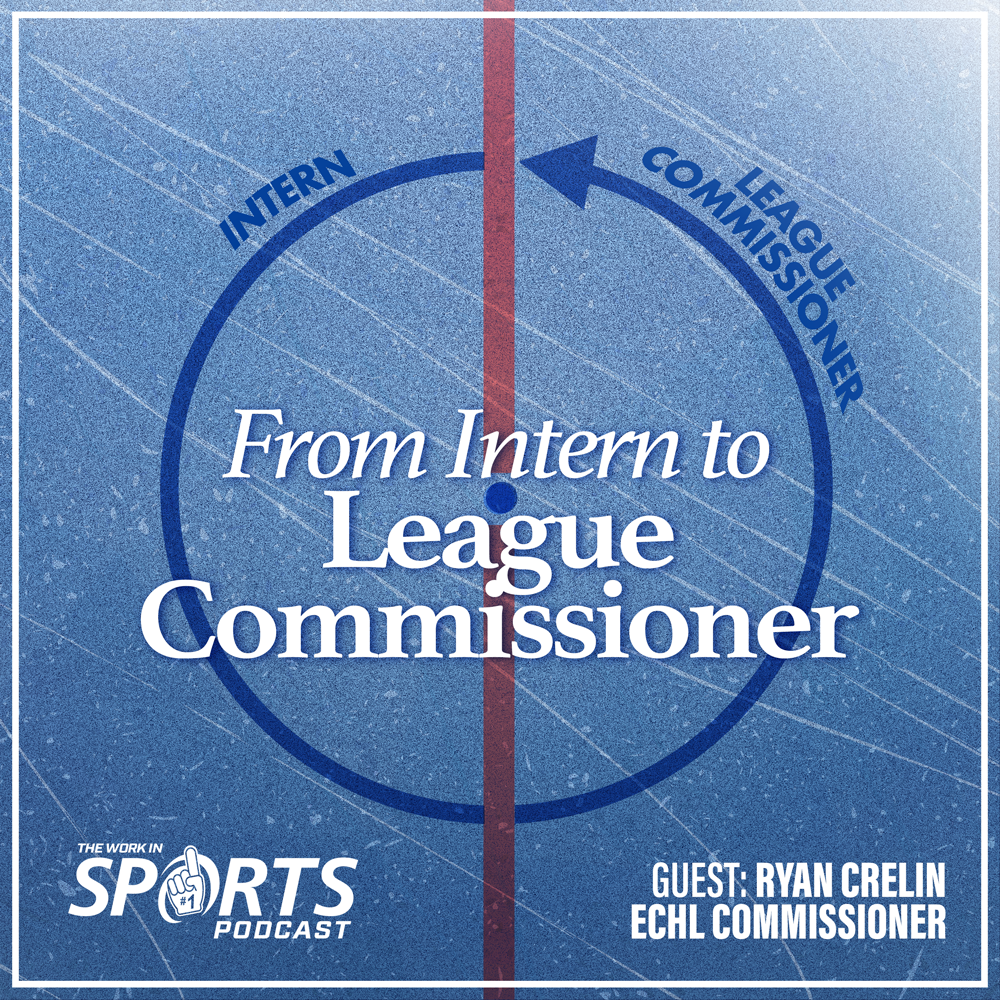 Hey everybody, I’m Brian Clapp VP of Content and Engaged Learning at WorkInSports.com and this is the Work In Sports podcast.

If you’ve ever heard me talk before about networking, you know that I believe there are 5 types of people you need in your network. One of those people I call the connector.

They are the person who knows everyone and loves to connect the dots between who they know. This is a special attribute within some people. They are naturals at getting to know people and then figuring out ways their connections should get to know each other.

For me, connectors are an extremely valuable part of my network. I need them. When i have my sights set on a guest for this show, the first thing I seek is… which of my connector friends may know them.

A little over a month ago, I read a story on Ryan Creelin, commissioner of the ECHL. The story explained how he was an intern at the ECHL, and over 17 years worked himself up to eventually become the commissioner.

That kind of story gives me tingles. Seriously -- isn’t that all of our dream? Get an internship at a great organization, then get hired, then advance, then become the boss. It sounds like something out of a cheesy movie on Lifetime, but this is real life.

I had to land Ryan as a guest.

My first guess was… Bill Guertin. Bill is a former guest on the podcast, he’s a sales trainer, one of the best in the business...and he is the very definition of a connector.

I knew Bill did a lot of sales training with minor league hockey teams and leagues… so the chance he would know Ryan was solid.

So I reached out. Within 30 minutes, Bill was connecting Ryan and I for today’s interview.

Networking is more than just knowing the right people to help you get a job. It’s having advisors who can help you through tough decisions, connectors who can introduce you to the right people, insiders who know what’s happening in the industry at all times, idealists who see the potential in everything, and realists who keep you grounded when you need to be.

Today's guest Ryan Crelin as I mentioned is the commissioner of the ECHL, a minor league hockey league with 26 teams spread across the US and Canada -- the teams roughly equate to a Double-A baseball team. A minor league feeder system for the NHL.

As a reminder -- this interview was conducted before Coronavirus became a thing when their league was in operation and games were being played… so there is no mention of their suspended season or how it will affect them moving forward… but there is a ton of knowledge personally about Ryan advancing through the organization to become commissioner, and on how a minor league can survive on the sports scene…

1: There something I really love about your resume. You graduated from Seton Hall in 2006, been working at the ECHL since 2005. There something really endearing about that.

I talk to people who jump all over the place during their career- heck I’m one of those people – why has it been important for you to get into the ECHL and stay there?

2: To start as an intern and develop into the league commissioner almost sounds like a lifetime movie script, a feel-good story, that seems somewhat farcical – but you are very real.

What was your mentality and approach when you first started out in the ECHL – did you envision this?

3: Give us a little bit of insight into your path – we know you were an intern, and we know you are now commissioner – but what specific skills did you refine, and roles did you take on, during your ascension?

4: When you look around now, at the teams in your league, at your league offices – are you looking for people, like you, that have that extra drive and focus?

5: I know of at least one member of our audience who currently works for an ECHL team, Scott McDonald with the Atlanta Gladiators – he’s in ticket sales now – how important is it for a young person getting going to show they can generate revenue for an organization?

6: You went back and got your MBA at Rutgers with an emphasis on finance and taxation – how big of a role did this extra layer of business and revenue knowledge play in your growth in the industry?

7: The ECHL is the primary developmental league for the NHL and AHL, and that includes players, coaches and even referees – I read there were 57 former ECHL players on NHL rosters opening night, and another 37 coaches with ECHL background including Boston Bruins Head Coach Bruce Cassidy. Astounding figures.

But I wonder – how much of a role does the ECHL play in developing the game of hockey?

8: we’re all familiar with what the title commissioner intimates – but how do you characterize your role on a day to day basis?

9: 26 teams in the ECHL in very different markets – you have hockey in the south with multiple teams in Florida, hockey in the Midwest with teams in South Dakota, Kansas, Utah, Texas and even Idaho, and up in Canada far north in New Foundland –

I imagine every team has different challenges attracting and retaining their audience – how much do you work with each team to understand their opportunities and threats?

10: When I talk to people in minor league baseball they talk about being both unique and hyper-local in their team names and logos – that the revenue from merchandising has been key to their profitability – how big of a role does that play in the ECHL – are the team names logos and likenesses helping drive merchandise sales?

11: Minor league sports are always very family-focused – how do you help to ensure going to an ECHL game is a great family experience?

12: We have a lot of interns in our audience, who are right now trying to make a name for themselves in the industry – what final advice would you give to the young people out there listening and hoping to someday be a commissioner like you?

By Brian Clapp | April 01, 2020 Sign In or Register to access all articles and insider tips for help in your job search.