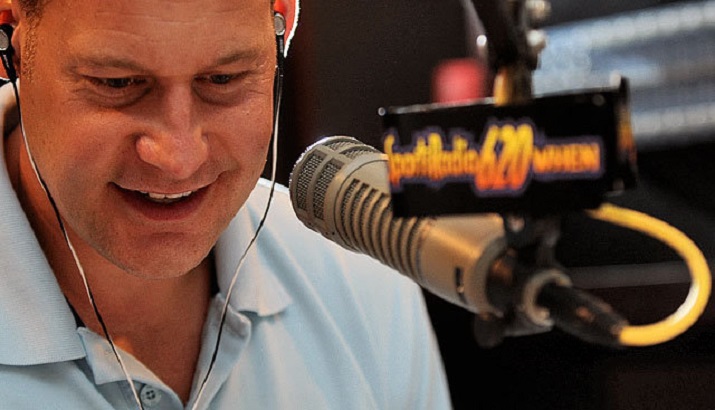 The Hard Reality of Working in Sports Radio

The reality of working in sports radio is that it doesn’t begin with catered lunches, fancy cars and billboards sprawling across major highways with your dimpled chin on it. Sports radio jobs start in small, humble markets far from your creature comforts.

“If play-by-play or sports radio jobs are something you want to pursue out of college, realize that you better have your bags packed and be ready to move to a small market away from friends and family,” says Jim Tarrabocchia, Sports Director and Play-by-Play announcer for KASL radio in Cheyenne, Wyoming.

"Listening and seeing sports radio personalities and play-by-play guys on radio and television looks like a blast, and it is, it’s a very rewarding career, but be realistic, those guys paid their dues, and you will have to too.”

What gets lost on many aspiring sports journalists, whether in sports radio or television, is that everyone they watch on network television or hear on sports radio started small and proved themselves with hard work, attention to detail and an unwavering passion for what they do.

“I grew up in Southern New Jersey in the shadow of Philadelphia with the beach 30 minutes away,” recalls Tarabocchia. “I knew though, that while I may return to that area someday, I have to work my way up the ladder in this industry and getting this opportunity in Cheyenne is huge.”

I had a former Associate Producer of mine start his on-air career in Pocatello, Idaho and he called me one day and said ‘they want me to report on the rodeo and I know nothing about rodeo’… have you had moments like that and if so how did you handle it?

Tarabocchia:  It’s funny you ask that because, when I was talking with management about coming to KASL, they told me right out that not only would I be doing play-by-play and covering football and basketball, but I would also be calling volleyball matches.

As soon as I heard that, I studied up, watched film of matches, and listened to other broadcaster’s call volleyball matches. I grew up watching all four major sports not mention played all four - I know as little as one could about volleyball.

For two weeks before I started, all I did was try to learn about volleyball every day.


People don’t always appreciate the amount of work that goes into sports radio jobs, take us through what a normal day is like for you as sports director at KSAL radio.

Tarabocchia:  Every day is basically trying to touch upon every one of my duties as Sports Director, some more than others.

I get into the station around 6AM, Prep for my morning sports update, perform, and then prep for the upcoming football, or basketball game that I’ll be doing that weekend.

I stick with that routine throughout the day, and sprinkle in phone calls I have to make, talk to some sales clients, and produce promos for upcoming sports events on the station.

You started out doing play-by-play for the Florida Collegiate Summer League – how did you get that opportunity and has it helped you build your confidence in doing play by play?

Tarabocchia:  I was a Division 1 college baseball player and not only did I collect some great memories, I also made some great contacts.

Looking at the bigger picture, it did really help my confidence.  I really figured out my style, different ways to call things, how to weave stories in and out, and how to be descriptive while broadcasting on a sports radio platform.  All of those elements I learned and that in turn helped improve my confidence.

You mentioned that you played baseball in college a La Salle– how much does that help you calling a game?

Tarabocchia:  There’s an abundance of ways that I could answer this question but I’ll break it down in two ways.

First, by playing baseball in college for two years before suffering a career ending injury, I’ve had the chance travel to different places across the country, and endure long bus rides. I still feel like a baseball player, I still throw and hit in the cage for goodness sake.

I know how to talk to players; I get a good idea about how their feeling just by looking at the way they carry themselves.  I feel so comfortable walking around the ballpark and because I’m so comfortable it helps me prep smarter.

Number two, speaking of prepping, because I played for so long I prep differently for baseball then I do for football or basketball.  I don’t fill out any boards for baseball.  I use game notes, media guides and then I take it one step further by looking over scouting reports, and watching film of hitters hitting and actually knowing what they’re trying to accomplish.  From there I gather everything together and create stories.

I’ve learned that stories are so crucial in a baseball broadcast, and being that I’ve been on bus rides that lasted 11 hours, stories help pass the time.  While it may be small; playing helped me develop my story telling because while I’m biased, baseball players are great storytellers.  These elements build confidence, and help me calling games.

What do you think were the most important skills you learned at La Salle which helped you land a job after graduation?

I just wanted to take advantage of everything the La Salle Communication department had to offer.  Whether it was calling games, working for the TV station, or radio station, I had the opportunity to develop my skills even further.

Lets talk about internships, you interned at NFL Films – that had to be an extremely competitive position - how did you get it?

Tarabocchia:  I was fortunate enough to have a friend from grade-school whose father has worked at NFL Films for over 20 years. I heard through them that there were intern spots open for the spring of 2012, I applied, got the opportunity to interview and prepared like I would for any interview.

When I first got there I was a bit in awe of the campus. The facilities are first class; I just tried not to get overwhelmed.  I must have done a great job in the interview process because I got the Internship.

To this day I still tell people that internship was one of the best experiences I’ve ever had.

What skills did that internship help develop?

Tarabocchia:   I mentioned earlier that I’m a baseball guy, so when I got to NFL Films I got to see the NFL in a different level.  I saw all the different NFL Films camera angles, watched old footage of even older games and really became enamored with football.  I met some players, and media personalities.

I wanted to learn everything I could about the NFL that could help me expand my football broadcast skills. I had the chance to learn so much more about top notch production, and about the NFL, the history, and the game of football overall.  It helped me with my confidence calling football games, which helps me be a more well-rounded play-by-play announcer.

By Brian Clapp | July 13, 2015 Sign In or Register to access all articles and insider tips for help in your job search.