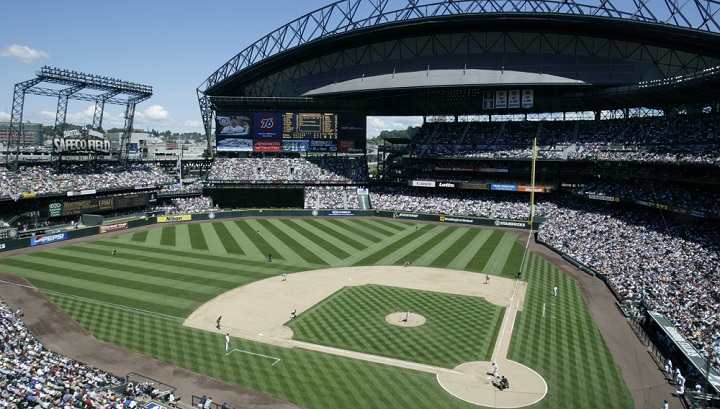 Life is often about routines, a natural repetition of action that becomes your norm.

In college, the routines you’ve grown accustomed to, like showing up to class in flip-flops and shorts, are completely acceptable for the environment you’re in. But, as you approach graduation your environment is about to change, and the ingrained routines of your life have to change with it.

Internships help provide a glimpse into the real world and hopefully, spark some new routines.

“Going to a Major League stadium every day to work is completely different from being in a classroom,” says Krista Staudinger, former media relations intern with the Seattle Mariners and MLB Advanced Media. “The level of professionalism required is much higher, especially when you are one of the youngest people contributing to the organization and are not surrounded by peers as you would be in a classroom setting.”

Staudinger knew she wanted to pursue a career in sports media relations, and no classroom could provide the learning environment that interning for her hometown team could.

“My internship with the Mariners helped prepare me for my role with the Australian Baseball League because I was able to see first-hand how a major league club runs its media relations and social media platforms,” says the University of Washington graduate. “I was essentially in charge of facilitating the media relations and social media accounts for the league in Australia, so it was helpful to know best practices from the Mariners and have experience in the field.”

For more on the experience of interning with a Major League baseball team, here’s Krista Staudinger:

You recently completed a Baseball Information internship with the Seattle Mariners, I imagine the competition was fierce, how did you get the internship and what was the interview process like?

My internship with the Mariners was definitely a dream position, especially since I have grown up a die-hard Mariners fan.

During my senior year at the University of Washington, I took a Sports Reporting class with Jerry Brewer, a notable sports columnist with the Seattle Times. For a class field trip we went to the Mariners pre-spring training media luncheon and it was there that I discovered I wanted to pursue a career in sports media relations.

Throughout the course of the quarter, journalists and other sports media figures came into our class to discuss their roles, the VP of Communications for the Mariners was scheduled to visit at the end of the quarter. I prepared a special resume for the VP and at the end of class I approached him with my resume, discussed my passion for baseball, the Mariners and my interest in working in sports and asked if there were any upcoming positions for interns.

He informed me that the interview process for Media Relations/Baseball Information interns was already underway but he would pass along my resume. I wrote him a thank you email and also emailed the appropriate contact with a digital copy of my resume.

I heard back from his contact the following week asking to come to Safeco Field for an interview.

The interview was more conversational than I had expected and I had a good connection with the interviewer. The one question that came as a surprise to me was when she asked about the pre-spring training media luncheon I went to and what I would do differently if I was in charge of the event.

I thought of something on my feet, but it was the one question that got my heart rate up!

When I was notified the following week I had been chosen to be an intern for the Seattle Mariners, I literally cried tears of joy.

Once you got settled in, what did you discover were the key expectations of your media relations role with the Mariners?

The key expectation of my role was to assist the Communications/Public Relations department in their daily responsibilities. My main duties included:


In addition to those core responsibilities I also created scorecards, assisted with press conferences, credentialing and helped prepare the press box.

Concurrent with your Mariners internship you also did projects for MLB Advanced Media which was more on the broadcasting side - conducting interviews, collecting video and sound bites – that’s a dramatically different role, was it a little intimidating working for the league and dealing with players?

I'll admit at first it was a little intimidating.

One of my main roles with MLB was to interview the "celebrities" who would come to throw out the ceremonial first pitch which included a range of professional athletes, actors, musicians, etc. Eventually you realize that all the players and public figures are just people too, no matter how famous they may be.

A lot of the “stars” had their families around and that really humanized them to me, realizing that hey this person is dad too, he has a daughter my age and just as well could be my dad. Eventually you get more comfortable and it is another part of the job, you have to remain confident in yourself until you reach that point!

You worked on traditional marketing pieces, like the Seattle Mariners monthly magazine and press releases, and also on their digital platforms, creating content and engaging in social media – what were the biggest challenges of each?

For me personally, the biggest challenge of working on the traditional marketing pieces was to make sure the tone and writing style matched the voice and tone of the Seattle Mariners.

The biggest challenge for working with their digital media platforms was to keep the information concise. Overall, I enjoyed the ability to be creative and use humor for the social media platforms.

Give us a blow-by-blow of what game days were like for you:

My game day role was with MLB Advanced Media.

Prior to each series I would receive information from MLB, visiting teams and the Mariners marketing department about what images, videos or interviews they wanted. These could be requests for photos of certain players, celebrities, events or holiday/promotional happenings at the ballpark.

I would typically get on the field early enough for the Mariners batting practice and listen to the manager’s address to the media in the dugout. I would take photos of players interacting with fans and other players from visiting teams, special guests on the field and other noteworthy interactions as well as artistic shots for social media use. I would also interview the guest throwing out the first pitch.

Once batting practice was over for both teams, I would go up to the press box and upload the material I had taken so far and then select what images I would send to the visiting team contact or MLB. I would write small blog posts to accompany certain images or videos (the work I did was submitted to MLB’s Cut4 Blogs). I would go back onto the field for pre-game ceremonies and film the ceremonial first pitch and whatever promotions were running on field.

During the game I would alternate between sitting in the press box (working on my computer to upload and write content) and walking around the ballpark looking for interesting fans to take pictures of and interview.

Whenever a fan caught a home run ball or foul ball I would try to locate them in the stands to get an interview as well. I would look for new angles and areas to take pictures of the ballpark and ballpark art.

If it had been a crazy game, occasionally I would attend post-game interviews to try and gather more content. After the game, once all of my materials were uploaded and sent to MLB I was free to go.

In your opinion, what are the most important skills someone should develop who wants to work in sports media relations?

In my opinion, confidence is a very important skill for someone who wants to work in sports media relations.

You have to be confident in yourself and your skills and not intimidated to speak with the media and athletes. Strong communication skills are also very important, especially for handling media requests. As most job descriptions require, being highly organized and being able to work on multiple tasks at a time will go a long way!

By Brian Clapp | November 23, 2015 Sign In or Register to access all articles and insider tips for help in your job search.