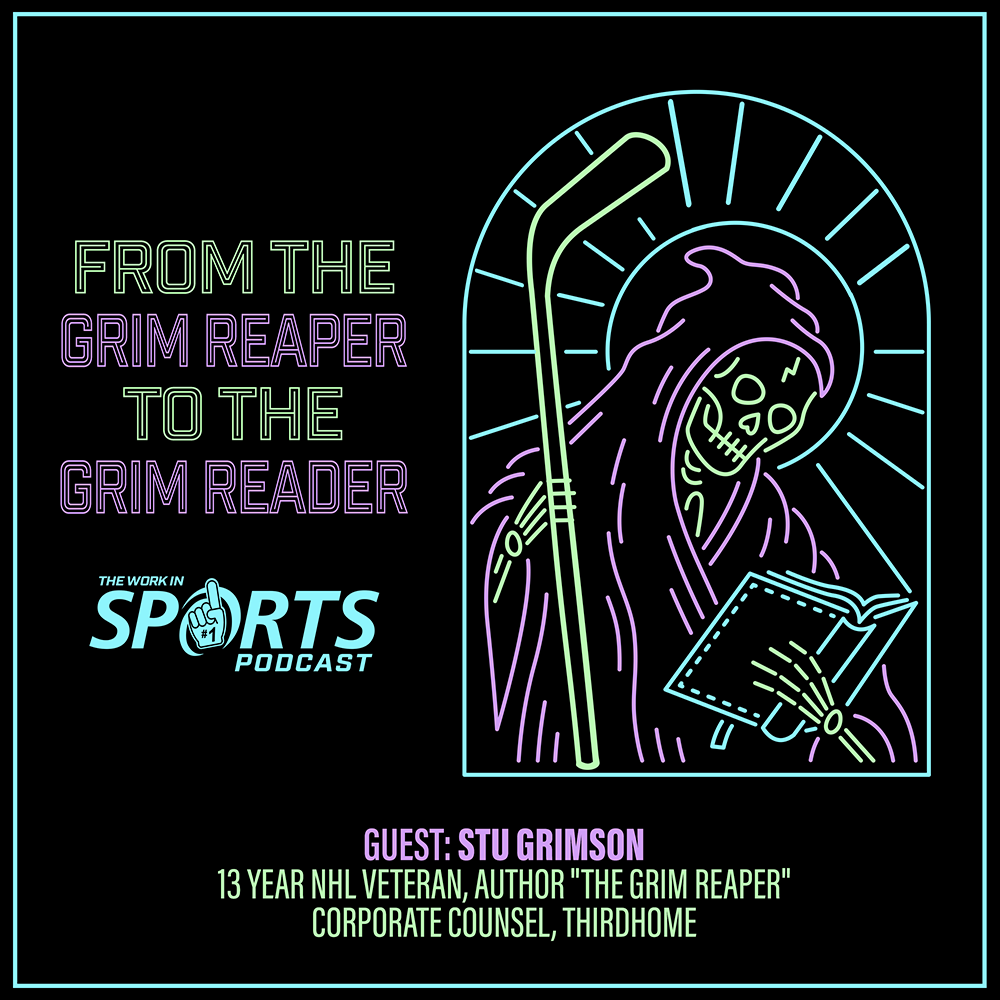 Stu Grimson was one of the most feared men in the NHL and now he's a fixture in the boardroom. Learn more about his transition from brawler to lawyer on the Work In Sports podcast.

Hey everybody, I’m Brian Clapp VP of Content and Engaged Learning for WorkInSports.com and this is the Work in Sports podcast.

I love contrast. Contradictions. The unexpected.

It can be as simple as a flower in the desert, a kid quietly reading a book when all of their friends are on their phones, or Tom Brady going to the Buccaneers.

Alright, maybe I didn’t love that last one so much.

But on a grand scale, I tend to seek these things out, always on the hunt for contrasting elements  - I don’t know why - just one of the quirks of individuality I guess.

These moments of contrast bring me great joy. I guess they remind me that the journey is not predictable, that patterns and assumptions aren’t finite - nature and people are always able to change and throw you a curveball when you are looking dead red.

And isn’t that an incredible lesson -- doesn’t it harken you back to the idea your mother drilled into your head not to “judge a book by its cover”? That we as people are all the sum of our actions, and actions themselves are individual and unpredictable?

Ok, maybe I’m going to abstract here and I need to reign it in, I get it.

But if you haven’t noticed lately, our society is largely based on the superficial judgment of others. We see looks, and judge, we see patterns and assume.

I can’t say we’ve lost touch with compassion, empathy, and understanding for each other, because I’m not sure we ever had it.

Well, I’m here to admit that I made the same mistake just last week and it was really enlightening. I assumed I knew someone based on my superficial knowledge of their past.

Stu Grimson played 13 seasons in the NHL as one of the most feared enforcers in the game. 211 career fights, of which he estimates he won about 80% of them, and watch the videos, he’s right.

His nickname is the greatest in sports -- the Grim Reaper. I mean come on, you are a fighter with the name Grimson, and you earn the nickname Grim Reaper. It doesn’t get any better.

When I worked in the media during his playing days I would celebrate this man as the baddest MF’er in hockey -- and cheer on his vicious battles.

I assumed he was a lug nut on skates. I born brawler with what little he had between the ears beaten out of him over years of repeated head trauma. I assumed that he may be addicted to painkillers somewhere. I assumed that he followed the predictable storyline of former player fallen on tough times.

You know what I didn’t assume -- that he’d be a successful lawyer. Never entered my mind.

We all do this. We try to fit life into predictable channels. We try to put our own conclusions on people based on our limited information. This is wrong at its core.

What follows next is one of the most enjoyable and insightful conversations I’ve ever had on this podcast. Stu is amazing, and I’m not just saying that because I fear for my health after assuming he was a lug nut on skates - I’m saying that because over the last few weeks I’ve gotten a little glimpse into the man and I respect the hell out of him.

Our conversation was long… so I’m going to break this into two parts -- I’m not editing out a simple word, part 2 will air on Wednesday!

1: There are so many topics I want to speak with you about, so I’m glad we have some time to truly dive into your whole journey and story.

Let’s start with your playing days in the NHL - 13 seasons with 7 NHL franchises, we often talk about the glory of professional sports – the money, the fans, the winning – but as you look back what was the hardest part of being a professional athlete?

2: With a nickname like “The Grim Reaper” there is no denying how you made your name in the game – you were an enforcer. Was this a role you were suited for from your early playing days in juniors, or was this what you had to morph into in order to make it in the league?

3: How important is that ability in life – that ability to identify what is needed, and fit yourself into the void?

4: In your book, the aptly titled “Grim Reaper” which I am starting to read now and it is awesome – you refer to yourself as a “reluctant warrior” – can you explain what you mean by that?

5: I’ve been in two fights in my life and for me the anticipation was the worst…I knew it was coming and it sat like a weight in my chest all day leading up to it. For you, this was your day-to-day existence – what is that like waking up each game day knowing that night you were going to get into a fight with some other monstrous human who wants to hurt you?

6: You and I have talked prior to this interview and I got a vibe that you take lessons from every life event you experience – which I admire.

As a young player, you took a brutal beating at the hands of Dave Brown from the Oilers, what lessons do you take away from a moment like that?

7: The discussion of mental health for athletes is getting louder and louder – thankfully. How much of a responsibility does the league bear in protecting its players, and are they doing enough?

8: I love contrast – and you my friend are the ultimate contradiction. A brawler with a deathly nickname who is now chief counsel for a luxury home exchange –- so I have to ask – has education always been important to you, and were you a good student back in Canada prior to being a famous NHL winger?

9: What about during your playing days – in my media career I saw athletes studying or reading business books in the locker room all the time, and when I’d ask about it, they’d say something like, “you always have to be thinking about what’s next.”

For you, when did that “next step mentality” become a reality?

Tune in for Part 2 on Wednesday!

By Brian Clapp | June 29, 2020 Sign In or Register to access all articles and insider tips for help in your job search.