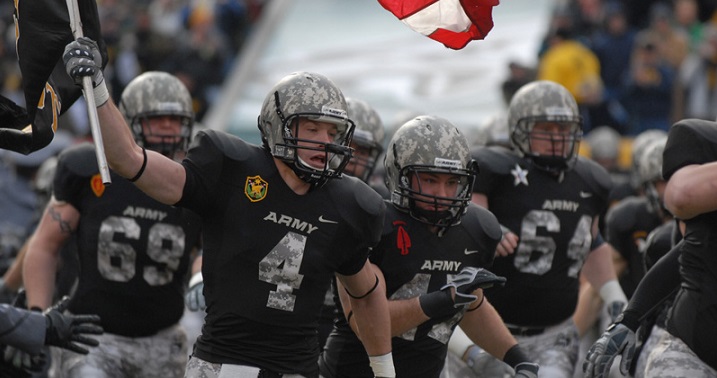 The Intersection of Sports and the Military

Memorial day is much more than an excuse to get off work and BBQ - although that is a wonderful side benefit - it's a collective moment of silence to appreciate those who have served and died for our country. Sports and the military have great parallels, but we often blur the lines of reality referring to athletes as "heroes" and members of the armed forces "warriors".

Even as a die-hard sports fan, that seems askew to me.

Neither one of my parents were sports fans, so my older brother and I are often left to wonder how we became so sports obsessed.

My father was a Vietnam war veteran, a proud Marine, who's only real appreciation of sports came from watching the Army-Navy Football game.

I couldn't stand that game, it was boring compared to my normal expectations - but I loved watching it with my father - the ex-Marine who watched not for the action on the field, but rather to support and admire the young men and women who defend our country.

I asked our audience to share their stories this week that combine Sports and the Military - here are a few of the best:

"My dad was a prisoner of war in Korea for 3 ½ years. When he got back he and my mom had us 7 kids; 5 boys and 2 girls. He ran his house like I imagine he stayed alive in Korea; keep everything clean, no fighting, look out for each other, be tough.

I was the second born and was always very competitive and the only one in the family that loved sports. I was always playing street football or hockey. When I wasn’t playing I was watching on TV. The Boston Bruins with Bobby Orr, Phil Esposito, Ken Hodge and others were my idols along with Jim Lonborg, Carl Yazstremski, Tony Conigliaro and others of the Boston Red Sox.

I only saw my dad compete once in my life and that was a softball game. It was very strange to see when I was about 10 years old but I noticed he was very good. He worked hard all his life as an iron worker in Boston so he didn’t have time for sports. In fact, as a nationally ranked sprinter and long jumper he only went to one of my meets. It was a big one though as he watched me win the All New England 220 yd. dash and long jump.

I also have fond memories of the day I came home from a 4th of July park Olympics event carrying my first trophy at the age of 10. He looked down at my sneakers and saw the holes in the toes and said, “you won that with those sneakers?” I said, “Yes”. He promptly took me and all my brothers to a local Converse shoe factory and got us all brand new sneakers.

"I consider myself fortunate to have been born in a sports family.  Growing up in New York City, I played sports in co-ed leagues and spent my summers at Yankee Stadium.  Although I have countless memories of days, nights, and incredible Octobers in the Bronx, my most special sports memory came at a different venue.

When I was five my grandparents took me and my siblings to an Army-Navy football game at Giants stadium. I remember my grandfather talking to us about the service academies as we tried to stay warm in the upper deck. It was unlike anything I had seen before.

13 years later, I marched onto that very field as a proud member of the Corps of Cadets.  My grandparents both had passed away by that time, but I know they were watching and cheering for the Black Knights.  I would march onto the field at three more Army-Navy games at Lincoln Financial Field in Philadelphia, but none were nearly as special for me (especially because Army lost all of those games).

I have served in the Army as a helicopter pilot for 8 years, including combat tours to Iraq and Afghanistan.  Every December, no matter where I was in the world, I would watch the Army-Navy game and think of that first game.  Today I am planning my transition out of the Army and into the sports industry, eager to be a part of something that has given me so many great memories.

It's amazing that you would ask how Sports and the military intersect in my life. We'll let me start by saying I am the fourth of five children and one of three who has served in the military. I was introduced to sports at an early age. Football by my eldest brother, baseball and basketball by my middle brother and we played as often as possible. Playing for the love of the sport.

My eldest brother joined the Army immediately after high school, my middle brother joined the Navy and retired after serving twenty years. I served four years in US Navy where I was chosen to play on the All-Navy and All-Armed Forces Women's Basketball Team.

I later received a College Basketball scholarship, played in the NCAA Women's Basketball tournament and just recently, I was inducted into the Hall of Fame.

Sports and the Military provided the opportunity for me to serve my country, become a First Generation College graduate and most of all make my family proud.

If you have a story of how the military and sports have intersected in your life, please share in the comments below

By Brian Clapp | June 03, 2016 Sign In or Register to access all articles and insider tips for help in your job search.