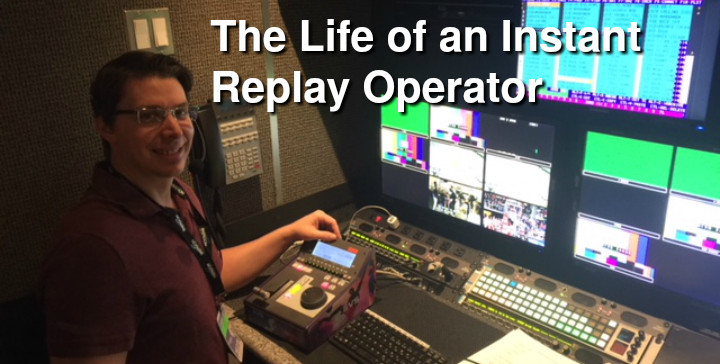 The Life of an Instant Replay Operator – How Did This Happen?

Believe it or not, I got started in this business for several reasons.  I played baseball for fourteen years and was involved in sports from an early age.

Baseball was my first love, but I also played football, basketball, and tennis.  I was into all sports.

Personality wise, I was a goofball.  That lead me to take TV classes in high school.  I loved being on camera and being funny.

When high school ended, I stayed local at a junior college to play baseball.  But after the second year, I had a change of heart.

One of my best friends was halfway across the state taking TV classes at Middle Tennessee State University.

I was ready for a change in my life and the thought of being funny on camera and working with TV again was appealing. So, I joined my friend at the university.

I took all the classes and learned many things about TV, but mostly behind the camera.

During those later college years, there was a big transformation with the direction of my career.  Did I say career?!

Internships were required the last two years of the TV Production program at MTSU.  I can’t recall how I landed one of my internships, but it was at a local cable station on a sports show.

It was so much fun!  I learned many things in front of and behind the camera, including the switcher, chyron, and even the teleprompter.

It was by far the best internship I ever had.

I got the bright idea to try for an internship at ESPN.  I thought my credentials would be good enough.

I received a postcard back saying I didn’t make the cut.

Real life hits during your senior year.  All the sudden, you start seeing bills due: rent, car, gas, food, and school loans.

Well, if I couldn’t make things happen at ESPN I would make them happen locally.

I interned at the local Nashville ABC station in the sports department.  It was quite fun as well.  I got to do things in front of the camera but mostly behind the camera.

Then I got the bright idea that I’d become a sportscaster.  I worked side by side with the primetime sports guy in town.

When it was time for my demo reel, I got up on the set and did the sports.  I was horrible!

More real life was hitting me.

College was over and my internship turned into real work.  I gave up on sports for the time being.

I became the weekend chyron operator for ABC in Nashville.  I learned about it enough in college and interned long enough to pick it up easily.

Then I became the early morning Director and Technical Director.  It was very challenging directing and punching the show at the same time.

It gave me an adrenaline rush, though, and I liked that.  For some strange reason, I enjoyed the pressure.

Well, local TV in the late 90s didn’t pay too well.  I’m shocked when I see the paystubs from back then.  It was pathetic.

I had enough and posted my resume on a TV jobs site like WorkinSports.com.

One day I was home from work and received a strange phone call from a man named Tony Valentino.

He was from ESPN.

I thought it was a prank phone call at first.  I even asked Tony if it was a hoax call.

ESPN flew me up to Connecticut, picked me up in a limo, and off we went to Bristol.

I was in the cafeteria with Mr. Valentino and he offered me a tech job on the spot. I would require a move across several states.

My dad said I better take it or I’d regret it for the rest of my life.

I took it and became a tape operator and technical director.

I worked on just about every single show, but my favorite was Baseball Tonight.

I was at ESPN for three and a half years when a life changing moment happened.

Because of my dad’s failing health, I headed back down south and became a video editor for the Nashville Predators.

During that time, I also took my TV skills as a tape operator and worked the TV broadcasts as well.

Then there was the NHL holdout.  Most of us lost our jobs.

It was back to the drawing board.

What Happened to Tape?

While at ESPN they brought in these “EVS” machines which were the future tape machines. They were all digital, no tape. (Editors note: EVS is their technical name, but in the business we call them "Elvis", which is much more enjoyable.)

I sort of learned how to use it but not completely. I thought tape would be around forever!

The best decision I made in my career besides saying yes to ESPN was to learn how to become proficient with the EVS instant replay machine.

I stayed in Nashville and worked a boring 9-5 desk job but worked instant replay for the Tennessee Titans games and Nashville Predators games on the weekends.

After five years of being a desk jockey, I plunged head on into the sports TV freelance world.

Life as an Instant Replay Operator

Moving this story way ahead … I’ve now worked in sports television for 18 years.

It’s been a blast!

I’ve been all over the United States and the world.

I work games in the NHL, NFL, NBA, car racing, and all sorts of other events.

It’s quite a bit of fun and it’s a fulfilling career.  I’m bringing awesome-looking replays to the audience and I’m getting paid for it.  How cool is that?

I work full time as a sports freelancer and I write a popular baseball equipment blog while raising a wonderful family at the same time.

My Advice To You

If you are aspiring to get into sports TV I have this advice.

It isn’t for everyone.

You must love sports, be willing to work long hours, and start at the bottom.

You must participate in internship programs.  You will not learn any real-world experiences at school.  It’s all about internships and building relationships.

Do you have what it takes to work in sports TV?

Jeff has worked in sport television for 18 years as a technical director, tape operator and now an EVS operator.  He has worked for ESPN, ABC, CBS, FOX and NBC Sports.  He also spends an enormous amount of time on his popular youth baseball equipment blog.  You can follow him on Facebook and Instagram.

By Jeff Wise | February 06, 2018 Sign In or Register to access all articles and insider tips for help in your job search.