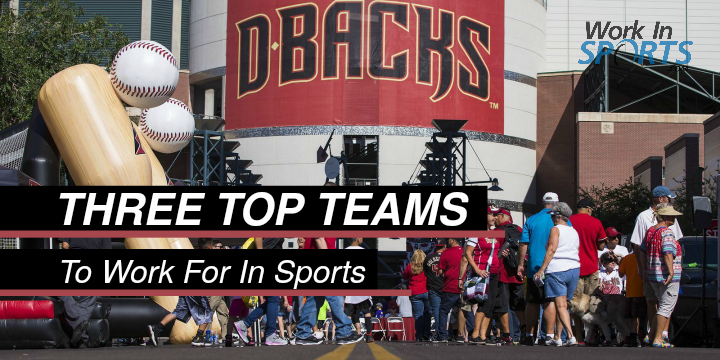 Three Top Teams to Work for in Sports

When you’re trying to break into work in the sports world, it might seem like any team will do.

In reality, working for a club that doesn’t share your values can leave you disheartened and burned out, making it hard to gain the experience needed to advance the career of your dreams.

Luckily, there are many teams out there that put the employee first in their organizations.

While they may not have the most expensive stadiums, what they all share is a community and culture that drives employee satisfaction to new heights.

These three teams are often cited as excellent examples for others in their leagues and divisions by their own employees as well as top reporters in the field.

The Arizona Diamondbacks are the darlings of Major League Baseball when it comes to employee culture. The team strives to keep employees at all levels engaged.

According to Forbes, the organization includes groundskeepers, ticket sales agents and workers in other seemingly minor roles in its regular monthly executive meetings to solicit feedback and provide encouragement. The club’s president believes that the Diamondbacks’ culture is the hallmark of the organization.

Community involvement is also one of the core values of the Diamondbacks; the Arizona Diamondbacks Foundation was created for charitable works even before the team played its first game.

The foundation works hand-in-hand with local youth baseball and softball programs as well as other charities and nonprofits to address homelessness, healthcare and children’s well-being in the Arizona area.

This makes Diamondbacks personnel a valued asset to the community, and staff members are often viewed by local fans with a reverence more commonly afforded players on the field.

Ohio State University also features programs dedicated to the local community, and the school’s NCAA football program consistently ranks high on satisfaction reviews due to the level of respect it gives its employees.

Buckeyes staff may work long hours during the season, but regular recognition and encouragement help ease the strain of many man-hours spent tending grounds and preparing for big events.

Ohio State employees sounding off on Indeed note that the school’s culture is “contagious,” and many cite excellent benefits as well as an energy that pervades event planning and execution as keys to why it’s a top school for employees.

The Buckeyes’ athletics department fosters a culture of growth and advancement, and this tends to keep turnover and dissatisfaction low in an industry often plagued by both.

Even groundskeepers leave five-star reviews of their experience working with the department. It’s no wonder that Ohio State University is one of the schools that most benefits from the return on investment in its college football programs.

If you’ve dreamed of working for a National Basketball Association team and weren’t sure where to get started, the Cleveland Cavaliers may give you the boost you need for a meaningful and long-lived career.

The Cavs are known for helping employees find promotions both within the organization and the league as a whole. This means their comprehensive training department doesn’t just train future Cavs personnel, many staff members go on to other careers throughout the NBA.

This focus on building quality employees from day one means that the company spends a lot of time and resources on training, but that investment ensures the Cavs have got a top-notch staff ready to handle the demands of the busy basketball season.

Sixteen Glassdoor reviews from workers show 100 percent support behind the decision of the company’s president, a remarkable number in any field. Even employees who move on note that the organization’s training provides a “great stepping stone” for other careers and that they’ve enjoyed the “work hard, play hard” mentality.

Being picky when choosing your big break into a sports career can pay off exponentially when you’re paired with an organization that shares your values. Working for your favorite team, or even in your favorite sport, offers its own rewards, but getting a solid start with one of the top teams for employee engagement and culture can help you land the job of your dreams further down the line.

Even many top MLB general managers began their careers by starting small, some literally in the mailroom. Take into account the benefits and networking options offered as well as the organization’s culture and community, and make the right choice to springboard your career in the world of sports.

By Brooke Faulkner | October 26, 2017 Sign In or Register to access all articles and insider tips for help in your job search.