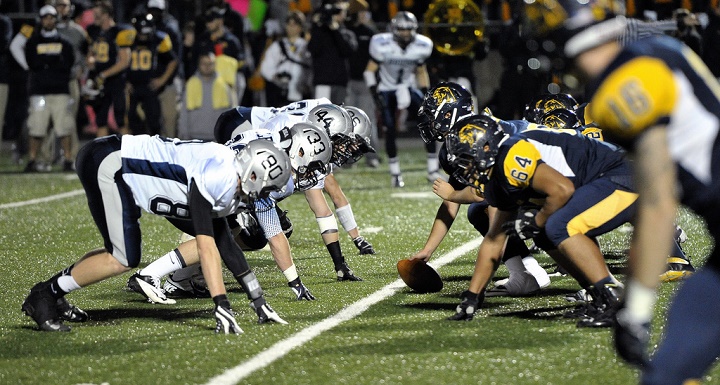 Spend some time listening to NFL and NBA draft analysts and you’ll walk away with a bevy of new buzzwords and catchphrases.

Sometimes the terms seem superfluous - like Mike Mayock is just trying to one up Jay Bilas - but others make complete sense, like an athlete’s ability to “play in space.”

Let’s use offensive lineman as the prime example of playing in space.

A guard has a center on one side of him and a tackle on the other; he operates in a small range protected on either side. His job requirements are more linear, it is harder to expose him because he has at least the potential for assistance on either side. Patriots head coach Bill Belichick, once said "you can always find a guard", primarily because they are protected, with a greater margin for error and thus play less of a premium position.

He’s on his own reacting to all the open space around him. When a defensive end rushes wide the tackle must adapt with rarely any help. The end could spin back inside, and again the tackle, on a lonesome island, has to adjust knowing he is the only path of resistance.

A tackle in college will often shift inside to guard in the NFL primarily because they aren’t able – ready for it – to play in space. Maybe it’s their lateral quickness, instincts or something only Mel Kiper Jr can quantify, but being able to play in space is why tackles make the big bucks.

What Does This Have to Do With Working in Space?

There are many other examples in sports of playing in space, an NBA star being able to isolate and score, or vice-versa being able to defend an isolation play. A linebacker being able to tackle an opposing running back in the flat with no one else around to make the tackle but him.

All of those are examples of playing in space, knowing what to do and how to make a play without assistance, with everyone watching but no one else there to help.

The same thing happens in the workforce and if you can master your ability to play in space, you can be a dream employee.

So What Does it Mean Already?

Picture yourself on your first day on the job, you are task oriented, trying to learn exactly what to do, step-by-step. You aren’t thinking about how to do anything better, or more efficient, or taking on someone elses role, you are only focused on what your trainer or manager is telling you to do.

When you start out, especially as an entry-level employee, that’s exactly what you should do. Focus on execution and completing tasks as they are assigned.

A time will come, maybe within weeks or possibly months, when your hand won’t be held anymore. There won’t be a trainer watching your every move, or a manager giving you step-by-step assignments. You will be given some freedom to do your job.

You are now working in space - no one is holding your hand telling you how and when anymore, instead they are expecting you to execute, expand and live up to expectations.

How will you handle your work life without a tackle (trainer) on your right and a center (manager) on your left?

Will you take advantage of this new found freedom to kill time on Facebook? Make a haircut appointment? Chat with co-workers in the break room?

I’m not writing this to give all of the answers of what you can do, but there is a theme here, how do you perform when you aren't being told exactly what to do? That is working in space.

This may sound like I am the chairman of the anti-fun league; I understand the need for workplace banter and a well-timed Facebook update, just remember managers and supervisors are like parents, they know what you are doing more often than you think.

Show them you can perform, especially when you aren't being told exactly what to do, and you’ll always have an advocate on your side.

By Brian Clapp | February 25, 2015 Sign In or Register to access all articles and insider tips for help in your job search.