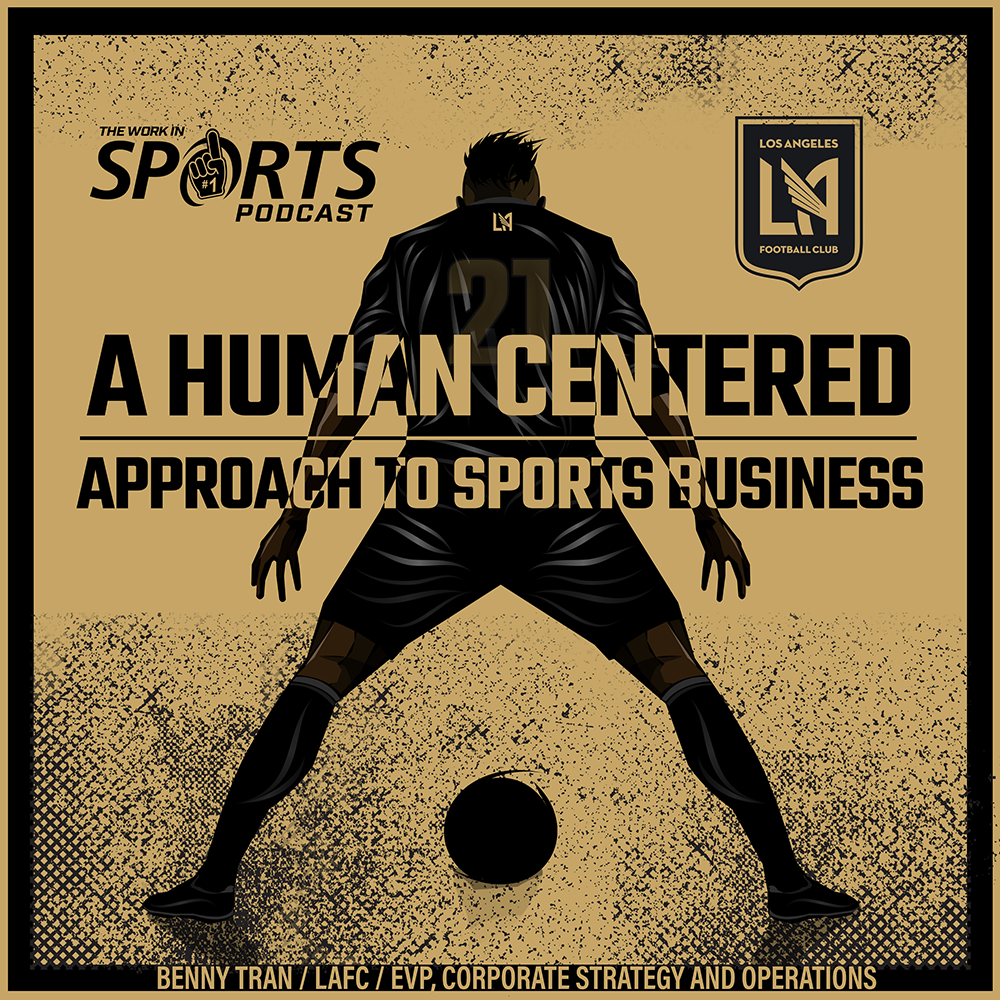 What would you do if someone asked you to build a new pro sports brand from the ground up, AND build a new stadium in LA? Your budget is 350 million -- go!

Me? I’d probably roll up in the fetal position and cry myself to sleep. This is a massive undertaking.

Wrong steps have enormous ramifications. And I am known for my wrong steps, it’s part of my charm.

You can’t do over a brand, it is a living breathing thing that gets established then takes on a life of its own through the local community and sports ecosystem.

You can’t wing it on a stadium build, there are layers and layers of decisions that will have an impact felt for decades.

Benny Tran, EVP of Corporate Strategy and Operations for LAFC is the mind behind these monumentally important aspects I’ve outlined for you. When you hear Benny explain it, as you are about to, it seems like a calm walk in the park.

He is so even-keeled -- methodical, pragmatic -- but also gives off this vibe like he has his arms around everything just fine.  Me I feel like I’m constantly sticking my fingers in holes, Benny just has a different air about him.

Can you tell I admire this guy?

Maybe it’s because in his life prior to sports, he worked on global initiatives like HIV/AIDS treatment in Southeast Asia, national health strategies and climate action.

When you have your hands in issues of this magnitude, what’s getting a stadium built?

There is a lot in this conversation -- from business intelligence, facility management, brand identity, community involvement, the importance oof daily workers and more.

Watch Benny Tran on the Work In Sports Podcast

1: Undergrad at Emory majoring in Middle Eastern Studies and Arabic, MPA in public policy from Princeton, over a decade with the Clinton Foundation working on climate initiatives and Clinton Health Access Initiative – anything was in reach for you at any moment, so why sports? Why was being a part of the LAFC story the right move for you?

2: October 30th 2014, MLS awards a new expansion club to Los Angeles after Chivas USA dissolved. You were hired a month later in December 2014 to be the SVP of Corporate Strategy and Development – early on, with so much to do, does it feel like trying to boil the ocean? How do you even start to prioritize and focus?

3: Much of your background, prior to sports, was in international development.

As you set forth to build a cutting-edge stadium in Los Angeles that would not only represent the city and the LAFC brand, but also employ thousands of people and open up the community – which proved harder your work in building public health infrastructure to treat people living with HIV/AIDS in SE Asia or getting a stadium built in LA?

4: I was reading through the stats of Banc of California stadium and I found myself saying “that’s cool” or “what a cool idea!” a lot. Every seat is within 135 ft of the pitch, it is an LEED silver certified stadium, over 1,800 full-time jobs created…

As you consider all you and the LAFC team accomplished with this new organization and stadium in LA – what are you proudest of?

5: As you’ve watched this team develop from the beginning to what it is now, how much of an impact has it had on the local community? And is that something that doesn’t get talked about enough in sports, the positive local impact?

6: Peter Guber owner and executive chairman of LAFC told the LA Times a few years back “When you build an organization, you build a culture, culture is your business plan.”

What does that mean to you, “culture is your business plan?”

7: The pandemic has affected sports in a myriad of ways, but one issue we don’t talk about enough are the daily workers - the parking attendants, concessions workers, culinary, hospitality - who depend on the game day experience to survive.

How or what can we be doing to better support these staffers massively affected by the lack of game day events?

8: We stress on this show quite often that sports is an industry encompassing predominantly business focused roles. Sure, there are a few jobs that are only in sports - coaches, scouts etc. -but really, we’re talking about roles you’d see in almost any business.

How important is it for the young people listening to focus on business skills to be successful in sports?

9: There are so many roles in sports that sound sexy – scouting, player development, athlete marketing, player-side analytics – they just sound cool.

BUT, isn’t the real trend toward business intelligence and revenue optimization roles?

ADD?: LAFC talked about listening to fans, and you hosted “community design workshops” with fans, of what appears to be a human-centered design approach.  What did this mean? Why did you do it? What was the result and was it impactful?

10: Let’s talk tech a bit – on part of your responsibilities at LAFC is to look to the future, to innovate. I read where even back in 2017, before the stadium was built, LAFC was doing virtual reality tours with potential corporate partners, which is really cool.

How essential is incorporating technology to meeting today’s fan expectations?

11: With your previous roles involving climate and sustainability, was it important to you personally to have Banc of California stadium on the cutting edge of green building techniques and do you feel like you succeeded there?

11a: Should leagues, or local governments do more to create incentives for sustainable building practices?

12: We’ll finish up with this – thank you so much for your time and insightful answers – are you still called “Stadium Benny” by the fans?

By Brian Clapp | March 24, 2021 Sign In or Register to access all articles and insider tips for help in your job search.