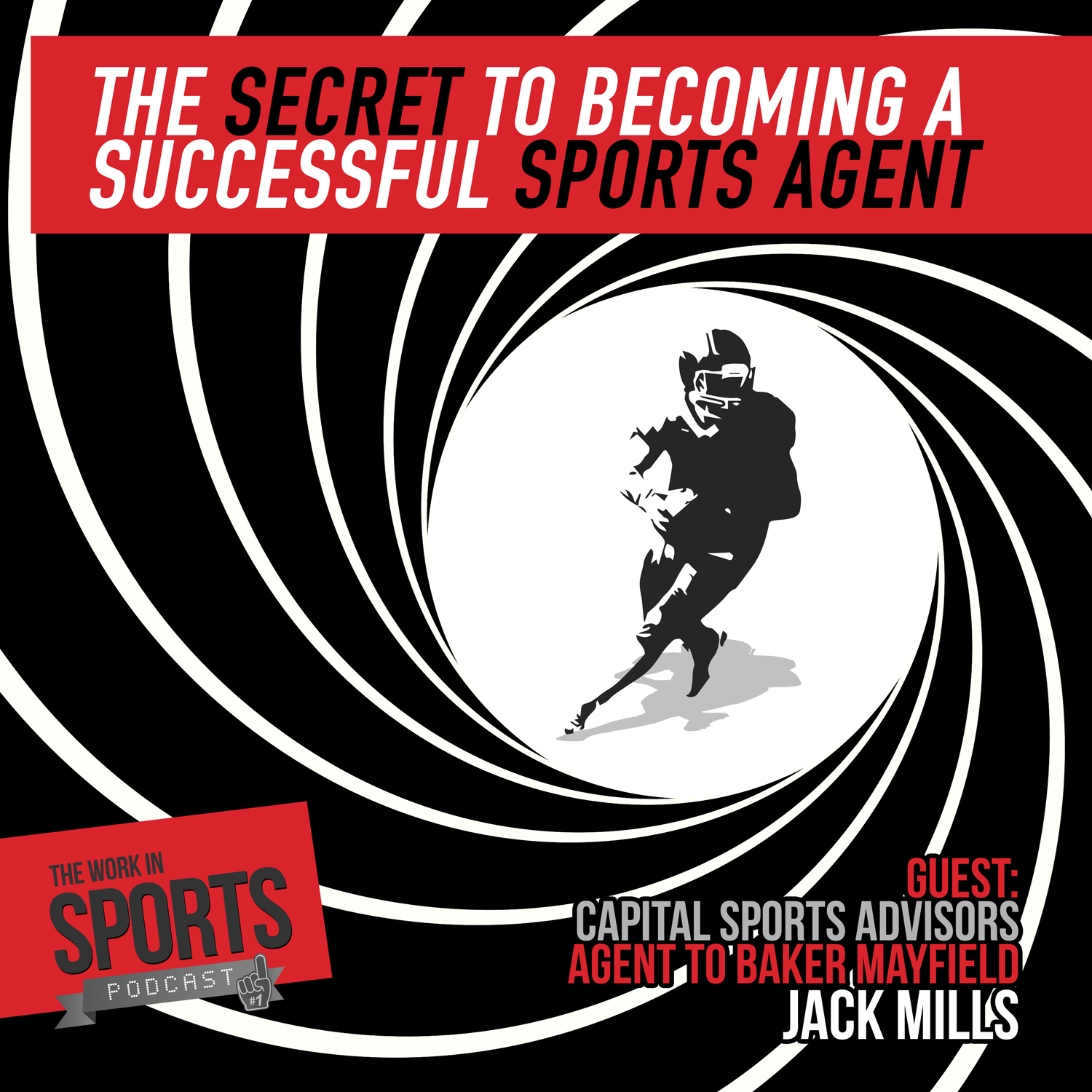 Jack Mills, agent for Baker Mayfield, joins the podcast to share the secrets he has learned over his 50 years representing NFL players.

I’ve long held this belief that if you are a sports fan you should work in sports. I know, revolutionary, but hear me out.

All the people out there who are accountants, administrators, human resources reps, sales account executives, marketing coordinators – all of these jobs exist in the sports industry, so rather than selling tires, why not sell tickets. Rather than marketing the worlds largest concrete museum, why not market sports events.

Analyze spreadsheets for some ecommerce site, or analyze game film?

Just about every job in the business world can be done in the sports world. They are simpatico!

But then there are the glamour jobs in sports too.

These are the jobs that are very unique to the sports industry, and require special focus and talent. Let’s hone in on that last one. Agent. Since Jerry Maguire the idea of becoming an agent has grown massively in popularity

There are about 830 agents certified by the NFL Players Association — more than one for every three players in or around the league. Roughly 75 percent of NFL players are represented by just 17 percent of all certified agents, according to NFLPA statistics.

The Super Agents rep about 75% of the NFL, then the rest battle it out for who is left.

Guys like Tom Condon – who represents Drew Brees, Eli Manning, JJ Watt and Matthew Stafford amongst others – accounts for 1.4 billion in contracts alone. 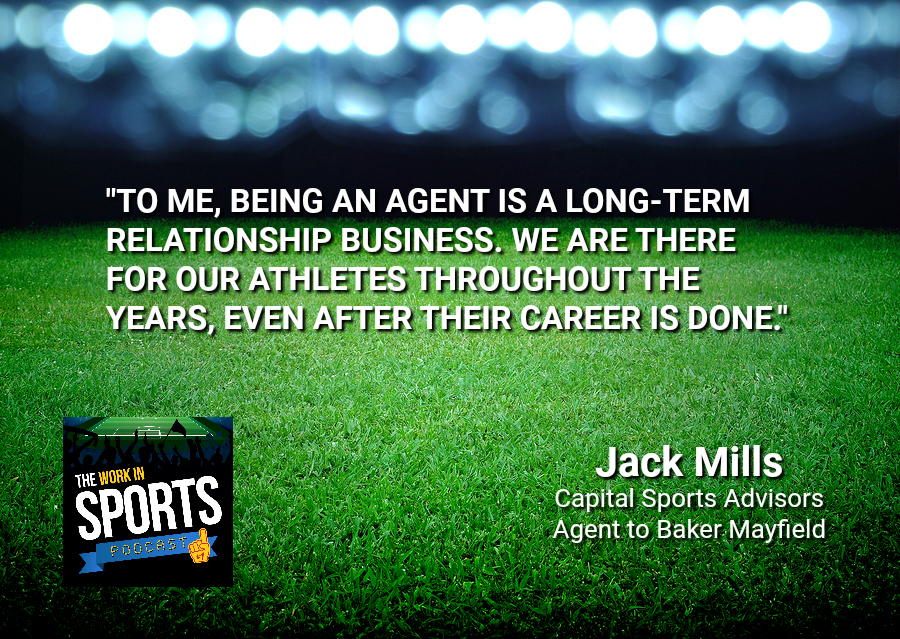 But, that doesn’t mean the business is closed out for people trying to break in. These super agents don’t work alone, they have huge agencies. There are Undrafted free agents, like Patriots Super Bowl hero Malcolm Butler who is represented by little known Derek Simpson. There are ways to make a name for yourself in this side of the sports industry if you truly want it.

Well, I have just the person to answer that for you. Jack Mills from Capital Sports Advisors – don’t know Jack? Well, you should. He’s the agent for #1 overall pick in the 2018 NFL draft Baker Mayfield. When Tom Condon and Drew Rosenhaus and Jimmy Sexton came knocking on Bakers door, it was Jack who stole the show.

Jack’s been around the block more than a few times. He represented 4 1st round picks in the 1970 draft. He’s represented Eric Dickerson, Tony Boselli, Rod Smith and a bevy of other top line, pro bowl, hall of fame type players.

And he’s here, to share it all with you. So let’s get to it.

1: Over the years it appears that agency has consolidated into a few major big players – all the biggest and brightest get represented by a handful of names, or agencies. As someone with decades of experience, but maybe not as much of a household name as let’s say Drew Rosenhaus -- how do you cut through huge competition to still land players like Baker Mayfield and 3rd round pick Michael Gallup? 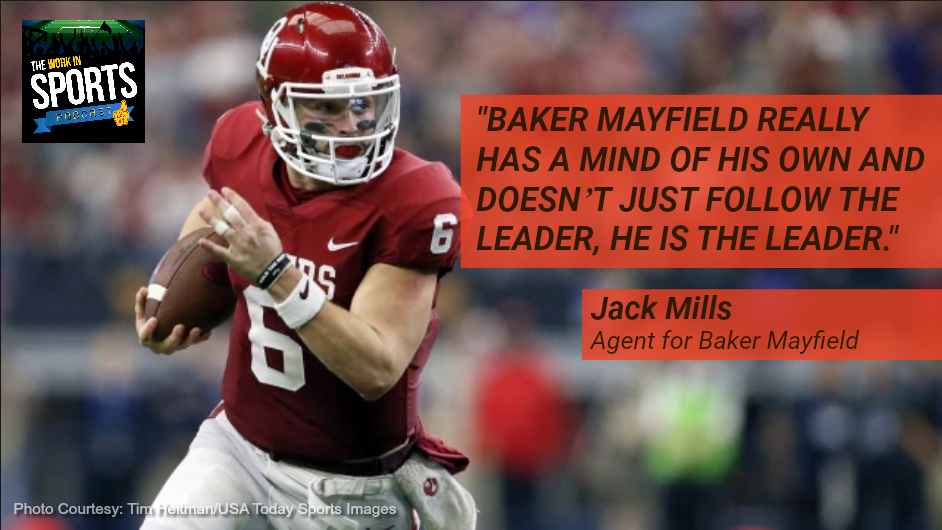 2: I found it very interesting that Tom Brady and Jimmy Garapollo are represented by the same agent Don Yee – how does that work? How can you possibly do your fiduciary best by your client if another client is in competition for the same position on the same team?

3: How would you describe the art of being an agent – is it a relationship job? Or more of a CBA / contract negotiation job?

4: You and I were connected by a mutual friend Zach Gross, and I give Zach a lot of credit, you were a panelist at the Sports Management Worldwide NFL Combine Career Conference and he identified you as someone he wanted to meet, and he struck up a conversation and has built a relationship with you since. How vital is it to be that personality type, the aggressive fearless, talk to anyone type, to be a successful agent?

5: You’ve represented some of the biggest names in the game over the last 40 years – guys like Eric Dickerson, Tony Boselli, Rod Smith – what are some of the biggest challenges you have faced managing these larger than life athletes as they progress through the league?

6: You have your law degree from the University of Oklahoma, do you view it as an essential step to get your law degree to be effective at managing athletes, or can you be a top agent without it?

7: You live in Boulder Colorado, and you went to the University of Oklahoma – how much do those connections matter in your recruiting – it seems you’ve had many Sooners and Buffaloes in your stable? 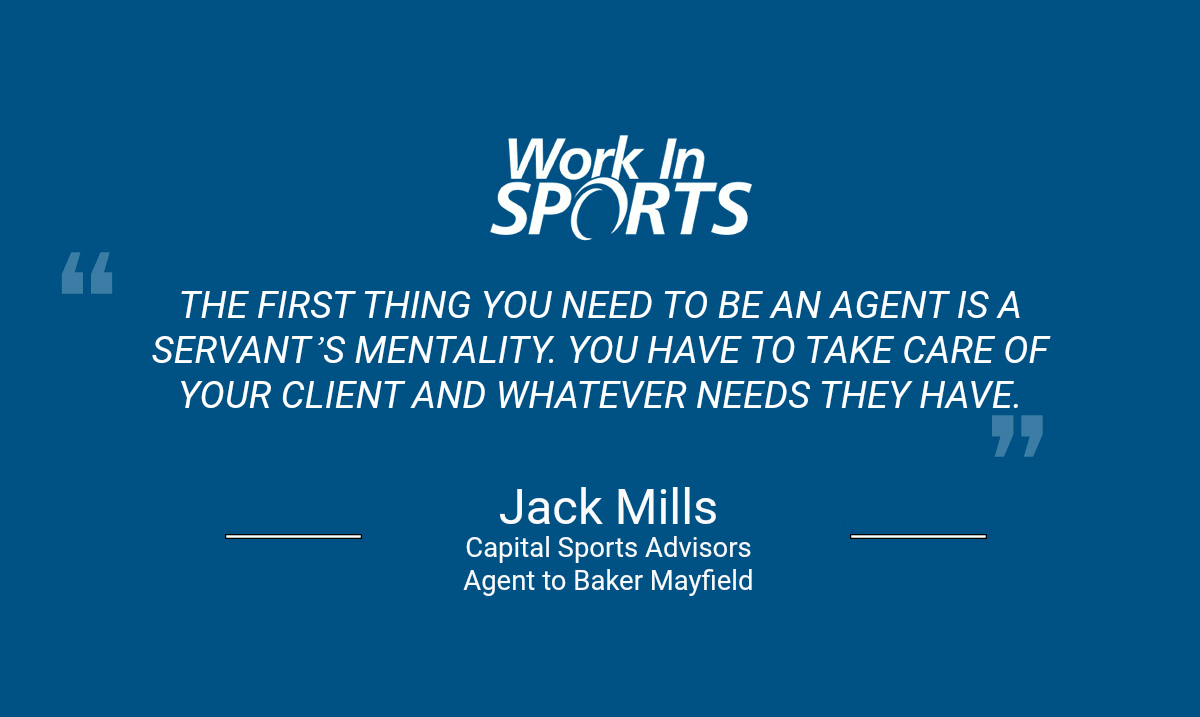 8: If you were hiring a team of agents to work under you – what are the qualities you would look for?

9: Is it even possible for someone to become an agent and work their way up by representing undrafted free agents and 7th rounders…or is it better to try and sign on with one of the bigger firms and go from there?

10: You’ve been doing this for some time, how much has the business of being an agent changed since you first started… and have the changes been for the better, or worse?

Jack it’s really been an honor to talk with you, thank you so much for your insight into what it is like on the front lines of NFL agency!

Jack Mills was just on our little podcast. That’s insane. I’ve never been more nervous for an interview, for one, Jack is thoughtful and speaks with a natural power and pace. I tend to speak fast and blurt out thoughts as they pop into my head, so you probably noticed I was consciously trying to alter my pace and be calmer than normal.

I need to thank Zach Gross for setting this up – Zach is an aspiring agent, a fan of our podcast, a recent MBA graduate and a hell of a guy. As I mentioned he met Jack at the Sports Management Worldwide NFL combine Career Conference and he didn’t just say Hi and walk away. He built a relationship with him, to the point they were texting each other the night of the NFL draft.

Nice work Zach, and thank you --- keep being fearless.

That’s it for this week – if you have questions you want answered email me at podcast@workinsports.com , join our private facebook group by searching for the work in sports podcast on facebook, and subscribe to this here podcast, I love having you all around.

By Brian Clapp | May 30, 2018 Sign In or Register to access all articles and insider tips for help in your job search.