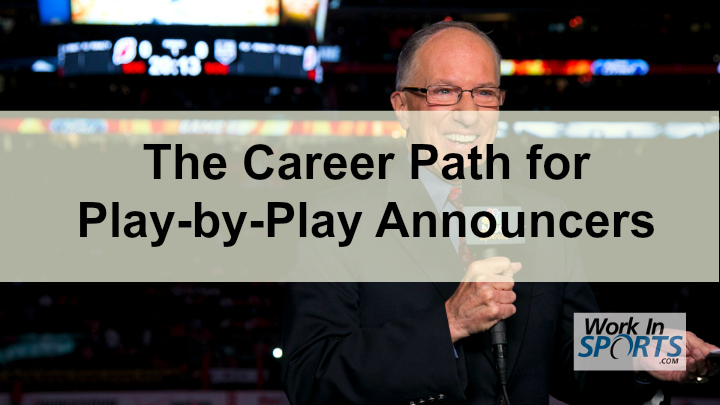 The Career Path For Play-by-Play Announcers

Being a sports fan usually means you aren't afraid to form strong opinions.

You love the coach, you hate the first baseman, you think the left guard has potential and that guy three rows down from you is the most annoying human ever.

That’s the life of a fan, being decisive about everything going on with your team – and even the surroundings.

Since we all feel so passionate about our teams, we also tend to form strong opinions about the play by play announcers and analysts.

I hear it all the time from fans – ‘I hate it when Jim Nantz does our games!’ or ‘Chris Collinsworth is the best analyst in any sport!’ and one I agree with wholeheartedly, ‘Thank goodness, Tim McCarver retired.’

All of these men and women started small, honed their craft and developed into big stars on the network sports level. For anyone that’s considering a play by play career I thought it may be fun to trace some of these network stars back to their roots.

These professionals weren't born into network jobs and just like you’ll have to do, they had to work at it and build themselves up from the bottom…well, unless you’re the son of Jack Buck.

This list is in no particular order, but it does have a theme. See if you can figure it out, if not, spoiler alert: I'll tell you at the end.

Mike “Doc” Emrick – The voice of the NHL

First Play by Play job: Hired by the Port Huron Flags of the IHL to do play-by-play and public relations in 1973. Broke into the NHL with the New Jersey Devils during the 1982-83 season.


Gus Johnson – the most enthusiastic broadcaster in all of sports – doesn't matter if it’s college hockey, Canadian Football or the NBA – he has “Hot Sauce!”

Education: Graduated from Howard University in 1990 with a degree in Political Science and was a four-year letter winner in Baseball.

Fun Fact: Johnson had a small cameo, as a sports announcer, in the 1998 film “He Got Game”

Education: 1997 graduate of William Patterson University where he majored in broadcasting

First Job in Sports: Radio station WGHT in Northern New Jersey hired Burkhardt to cover events including High School football, which he leveraged into a larger opportunity, albeit part-time, at WFAN.

Fun Fact: Early in his career, he worked as a sales associate at Pine Belt Chevrolet to help make ends meet.

Education: Shulman graduated from the University of Western Ontario in actuarial science – proving there is no one path to play-by-play announcing success.

First Job in Sports: While in school, Shulman became the main voice of the University football and basketball teams on local radio. His first paid job was for The Fan 1430 radio station in Toronto where he hosted Prime Time Sports.

First Real Play by Play job: In 1995 he became the voice of the Toronto Blue Jays at TSN where he remained for seven years and also announced NBA and NHL games.

When you watch this clip of Dan Shulman in action, ask yourself this question - do you think Dick Vitale believes Shulman took the charge?

Early Sports Career: Started his sports broadcasting career at the NBC affiliate in Abiliene, Texas and began doing play-by-play in minor league baseball, working for four different teams before moving up to the Atlantic 10 basketball network, the MSG Network and eventually the St. Louis Cardinals.

Devlin has had three stops in the NBA, initially signing with the Grizzlies in 2001, joining the Bobcats as their first-ever play-by-play voice in 2004 and then joining the Raptors in 2013.

Fun Fact: got into a “beef” with rapper Wale, after commenting during a game, “he’s no Drake that’s for sure”. (video below)


Mike Breen – main voice for the NBA on NBC, New York Knicks broadcasts and the NBA on ESPN

First Job in Sports: Soon after graduating from Fordham, Breen landed a job as a newscaster and sportscaster at WEOK/WPDH Radio in Poughkeepsie, NY.

First Play by Play Job: His first real opportunity in play-by-play came as lead announcer for Marist College basketball games and as an analyst for Seton Hall basketball on the radio.

Fun Fact: Spent over a decade as the main sports reporter on WFAN’s “Imus in the Morning” radio show.

First Job in Sports: While at Notre Dame Fitzgerald became the voice of Fighting Irish Football and Basketball for campus radio station WVFI. He came to fame in the Northern California area as the host of the 10pm-12am “Up All Night” sports talk show on KNBR. Despite being the Warriors main TV announcer, Fitzgerald continues his radio role at KNBR as co-host of the “Fitz and Brooks” show.

Fun Fact: During the 2008 Beijing Summer Olympics Fitzgerald was the play-by-play announcer for Water Polo.

Education: Nantz attended the University of Houston, majoring in broadcasting and played on the Men’s golf team (explaining the Masters connection).

Breaking into Play by Play: Nantz joined CBS in 1985 primarily as a studio host for college football and basketball, and in 1986 began doing play-by-play for NBA games.

Jim Nantz at his finest:

First Sports Job: His sports broadcasting career began as weekend sportscaster at WVIR-TV Charlotesville, Virginia (Market 197 out of 210), and he continued to climb the market ladder through Pensacola, Fl, Providence, RI and Columbia, SC before his big break at CNN/Sports Illustrated.

First Play by Play job: While at ESPN Berthiaume began doing some play-by-play work including the College World Series, which helped him land the job with the Diamondbacks.

If you haven't figured out these theme, it's rather simple actually.

None of these famous broadcasters attended Syracuse, Missouri or USC – three of the highest rated programs in the country for sports broadcasting. The intent is not to bash those schools, rather to make the point that your career doesn't begin and end with where you go to school.

The journey is really up to you.

By Brian Clapp | April 14, 2014 Sign In or Register to access all articles and insider tips for help in your job search.